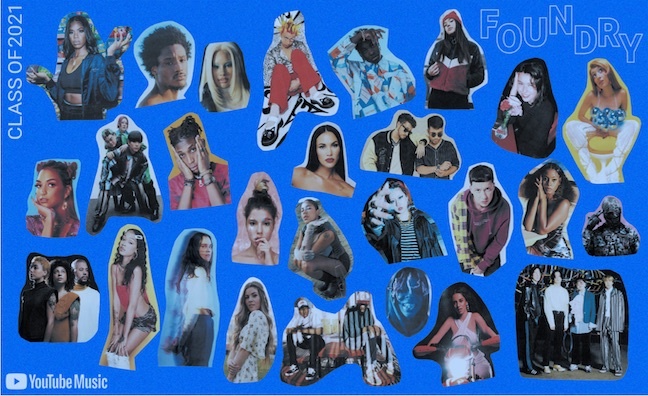 UK acts in the 2021 class including Enny, Meekz, Shygirl and Sinead Harnett will follow alumni including Dua Lipa, Dave and Arlo Parks.

Here, Naomi Zeichner, artist partnerships lead at YouTube Music, opens up about their ambitions for the independent music programme...

How has YouTube Foundry helped UK talent so far?

“Foundry began in 2015 as a series of content workshops in YouTube Spaces with emerging artists, like Mahalia, who attended an early London session. In 2017, the programme began focusing exclusively on independent acts, and supported early video releases from culture-leading artists like Rina Sawayama and Dave, whose video for Funky Friday helped that song debut at No.1 on the UK Official Singles Chart, a huge achievement for an independent act and all of UK rap.

“As we began bringing together artists as part of global classes, we continued to take early bets on artists we believed in, leveraging data but also our team’s love for music. Arlo Parks had fewer than 1,000 subscribers when she joined the Foundry Class of 2018, but her music was stunning and she had a clear talent for content and a team that was prepared to support her and make the most of resources.

“Since joining YouTube as the lead for artist & label development in EMEA, Nur Ozdamar has continued to champion Arlo, celebrating her new releases, her debut album and its Breakthrough Artist Award win at the BRITs this year as part of our Where Music Grows campaign. Nur has also led our partnership with Tems, who joined the Foundry class of 2020, as she was working on her debut EP. Tems has grown her channel subscribers significantly, and her song-of-summer contender Essence, a collaboration with Wizkid, just entered the Hot 100. We’re so proud to be working closely with her as she takes over the world.”

What does this programme now mean to the global music community - is it a key platform for breaking artists?

“YouTube is committed to supporting artists at every stage of their careers, including on day one. Foundry represents that commitment and our belief that, with the right tools, an independent artist can have the same potential for success as someone who chooses to develop with a major label.

“In today’s industry, there’s no one way to be independent, and no one model for success. Independence is not only a matter of which pipes you distribute your music through, but how you approach your career. Being independent also doesn’t mean being on your own! Artists thrive when they’re surrounded by community, and teams that back them up. Foundry is designed for artists who have a vision for their own success that YouTube can help them achieve. We’ve done our job well when we’ve identified an artist that values learning, their fans, and the freedom to build a career that’s sustainable for them.

“Culture ultimately decides how and when artists break, but an artist with those values and a platform is positioned for success. Foundry is a celebration of the creative potential of artists from music’s most exciting scenes, on a global scale.”

This is the biggest Foundry class yet - does that show the commitment from YouTube?

“YouTube’s commitment may be most significantly demonstrated by how long Foundry has existed; it’s one of YouTube’s longest-running artist programmes, and since its focus turned to independents, we’ve supported over 150 artists from 15 countries.

“The independent sector is growing, and so is interest in our programmes for independent artists – we received 450% more submissions for this Foundry class than last year’s. Our investment has grown too. In 2020, to help artists who couldn’t tour navigate new ways of connecting with fans, Foundry supported almost 100 live events from independent artists. In 2021, we’ve expanded our Foundry offerings to include not just our marquee artist development class, but rolling support for priority releases from ambitious independent artists like Japanese Breakfast, Kirby, Dawn Richard, Charley Crockett and Amorphous. That expansion is possible because of the dedication of our global team, especially Ashraf El Gamal, from our artist development team, and David Krinsky and Scott Pollack, who head up independent label relations at YouTube.”

What can you say about this year's UK selection and the ambitions to support those artists?

“Every artist in this class is incredible, and I’m particularly excited to have members of the class from Colombia and the Dominican Republic for the first time! That said, this year’s UK artists are especially formidable. Enny’s blend of rap and R&B feels both timeless and fresh, and we’ll be working with her to bring songs from her recent debut project to life. Meekz, from Manchester, exploded onto the rap scene around 2019, racking up 16 million views on a couple of impeccable freestyles. He’ll be rolling out a bunch of new releases throughout the year. And I’m a huge fan of Shygirl! We recently supported her long-form livestream and video for BLU, which is an inspiring example of what’s possible when innovators have resources. She’s at work releasing more music and brilliantly creative content for the rest of the year.

“Beyond the UK, I have to salute Bella Shmurda, a people’s champ in Lagos with lots of fans in London, and more artists representing Europe in this class: Rote Mütze Raphi, a rising Deutschrap star from Germany, and Paranoid 1966, a rapper and singer from Spain.”

What are the long-term benefits for participating artists and the support from YouTube?

“Foundry partnerships begin with a six-month intensive incubator period. But when an artist joins Foundry, we’re welcoming them to the YouTube and Google family long-term, which means we provide ongoing support for their releases, and help connect them with opportunities beyond their channels, with marketing, press, promotional support, and more.

“Our most successful partners are artists that want to drive their careers on their own terms, have clear goals for their content and channels, and are hands-on with our tools. They stand to benefit most from the partner support and resources they have access to as part of Foundry. And YouTube stands to benefit from walking alongside these artists, understanding the challenges they face as they work toward their goals, and listening to their feedback.”