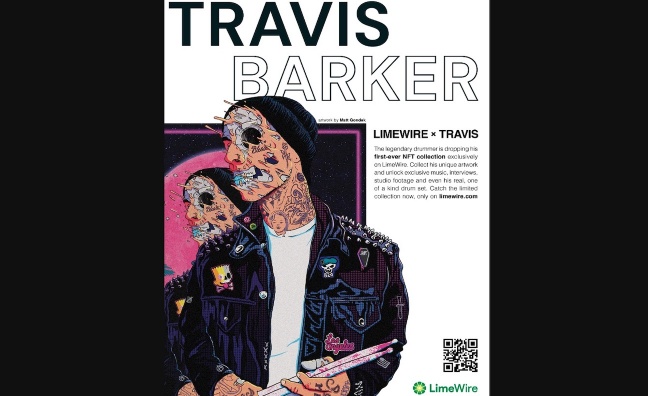 “I have always been interested in Web3 and NFTs so I am pretty stoked to release my first NFT collection and to do it on LimeWire,” said Travis Barker. “I hope that my NFT collection will inspire aspiring artists and fans who want to learn about my creative journey and how I make music. LimeWire has created a platform that makes exciting content like this accessible to all of my fans - even ones who are unfamiliar with Web3.”

The initial set of collections ranges from original tracks to artworks and content with in-person experiences such as backstage passes, meet-and-greets and, in Travis Barker’s case, a real drum kit set.

Barker's NFTs will feature behind-the-scenes footage of himself working in the studio, allowing the NFT collectors to have a first-hand look at his creative process. Owning this collection unlocks an exclusive song. Barker will also release a one-of-one NFT that is a 3D model of his drum set and the physical drum set he used at concerts and during rehearsals.

Music fans can sign up to gain access to the LimeWire marketplace ahead of collection launches and make payments via credit cards. The first collection dropping is by 7 Aurelius on July 7.

“We see a huge demand in the entertainment space for platforms that recognise and appreciate artists for their talent and put them in the driver’s seat,” said Paul and Julian Zehetmayr, LimeWire co-CEOs. “LimeWire presents a new commercial opportunity for artists of all sizes and genres to engage with their fans, gain more exposure in a unique way and retain more of their earnings.”

Artists will have a direct channel to engage with fans, selling music-related art, other collectibles and experiences such as front row seats, backstage passes, meet-and-greets and unreleased content.

Aitch’s NFT collection is based on his upcoming debut album, Close to Home, which is released on August 19. In collaborating with contemporary artist Funny Tummy and creative agency Soga World, the NFT artwork will represent each track in his album.

The original LimeWire file-sharing platform ceased operations more than a decade ago, following legal action by record labels. It has now relaunched under new ownership and recently signed its first major label deal with UMG.