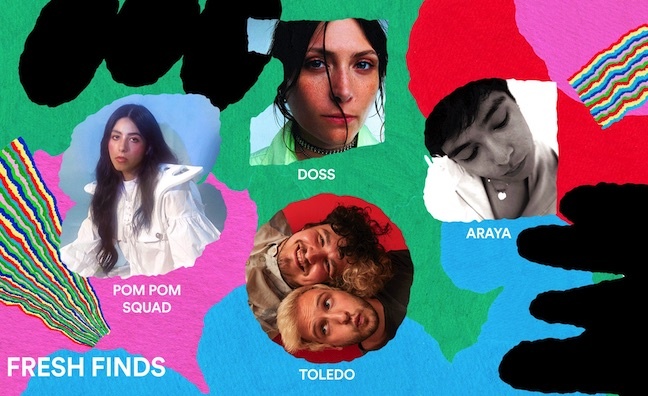 Spotify has spoken exclusively to Music Week about the streaming impact of its Fresh Finds initiative to support independent artists.

The streaming giant has also revealed the latest acts for the initiative: Doss, Araya, Toledo and Pom Pom Squad.

In May 2021, Spotify launched the brand new partnership programme for independent artists centred around its Fresh Finds playlist brand, with a focus on helping developing artists and giving them tools for long-term, sustained career success.

“We are thrilled to welcome this new group of independent artists and producers into the Fresh Finds family,” said Jeff Stempeck, head of indies, artist and label partnerships. “The sustained growth we’ve seen from our first Fresh Finds class earlier this year is exactly what we hope to bolster in this programme - giving artists the tools to build long-term careers both on and off Spotify.”

Since joining the inaugural Fresh Finds class in May 2021, the first four artist partners - Wallice, Unusual Demont, Julia Wolf and Ekkstace - have seen the following results:

The four latest acts joining the Spotify Fresh Finds programme will be provided with a suite of opportunities:

• Education & Access to Resources: Each artist will have access to an array of tools and opportunities to accelerate their careers, including personalised masterclasses and mentorship, credits to use on Spotify for Artists resources like Marquee, and more.

• Marketing Support: The four artists will be featured in a major marketing campaign, on and off-platform, which includes a social content series, Spotify Clips, out-of-home advertising and more.

• Creative Collaboration: The artists will be given the opportunity to each create and record an original song at Electric Lady Studios that will be released in November under the Spotify Singles banner. Spotify’s Songwriter & Publishing Noteable team has paired the four artists with collaborators.

The Fresh Finds playlist brand - which includes the main flagship playlist, nine genre lists, and 14 playlists from regions around the world - is often the first level of Spotify playlisting for independent artists. It serves as a launch pad for many who have gone on to wide mainstream success including Clairo, Omar Apollo, Curtis Waters, 100 gecs, Amine and more.

Since its launch in 2016, Fresh Finds has playlisted over 27,000 artists, with their average monthly listeners increasing by 133% in the 28 days following the add, compared to the previous 28 days. For artists whose first Spotify editorial playlist is Fresh Finds, over 60% go on to be added to another editorial playlist on Spotify.

New York City-based dream-pop duo Toledo are to be paired with producer Gabe Wax (recording remotely, not at Electric Lady).

Thai-Chilean songwriter Araya has a forthcoming album, Ethos, which will come out in early 2022. He has been paired with producer Mindchatter.

“I’m most excited about being paired with a new producer and being able to create something completely different sonically from what I usually make,” said Araya. “Both Mindchatter and I had an amazing time working on the track at Electric Lady and we can’t wait to share the song with everyone!”