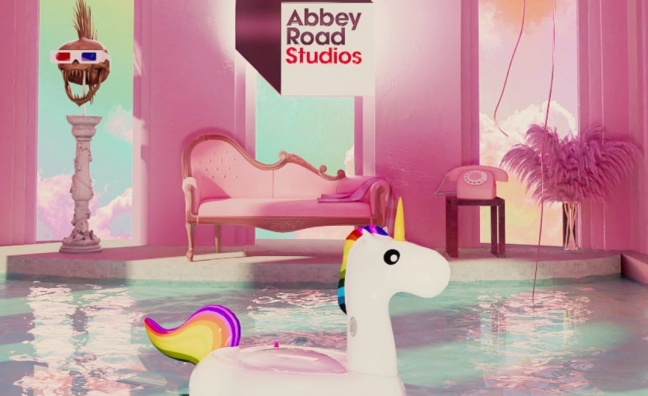 Abbey Road Red has revealed that XONE is the 17th start-up to join its music technology incubation programme.

“Recreating the concept of a bedroom wall, each XONE is a haven of cultural identity; a place where users can showcase posters, 2D or 3D NFTs and their digital goods, together with streamed music and explore it all and more in mobile augmented reality,” said a statement.

XONE aims to encourage creators, fans and artists to move into the metaverse by creating an accessible social media interface for showcasing and sharing digital identity.

The launch of the Abbey Road Studios Spatial Audio Forum five years ago marked expansion into new areas, including immersive audio and XR formats, and Abbey Road Red is now extending this with XONE and the AR metaverse.

The first listening parties have already been tested and XONE also has ambitions to deploy spatial and interactive audio elements across its music experiences.

Inside the application, users interact via discovery feeds, likes and comments, and chat features. In AR mode, users overlay a portal on the environment around them and use their phone as a window to step into the XONE world.

The next online evolution, whether making music, interacting with it in digital realms or enjoying it with friends, is the metaverse

XONE is also integrating its technology into Nreal’s consumer AR glasses product line. Nreal, which recently raised $60million in funding from Alibaba, will promote XONE and its featured app in its bricks-and-mortar store roll-out in the UK and beyond later this year.

“Incubation with Abbey Road Red will help XONE mature its music ambitions, bringing the team closer to the industry and giving it development support in everything from technical design elements, understanding and catering to the needs of artists and the structures and strategies behind them, and building their first music activations and partnerships,” said a statement. “Abbey Road Red will also be able to share the studios’ considerable experience and knowledge base in immersive audio with XONE to inform its spatial and interactive audio design and features.”

Isabel Garvey, MD, Abbey Road Studios, said: “Abbey Road Studios took its first steps into spatial audio and 3D studio experiences five years ago. Our industry value chain has transitioned into digital and online while retaining the best parts of offline. The next online evolution, whether making music, interacting with it in digital realms or enjoying it with friends, is the metaverse, which we began exploring before our Metaverse and Beyond Red Talk in 2020. With XONE we're looking forward to taking this development to the next level, sharing what we've learned with them along the way and helping them build a bridge into a new plane of music creation and experience."

Karim Fanous, innovation manager, Abbey Road Red, said: “We’re delighted to welcome XONE to the incubation programme. The founders are well balanced between technical chops and design finesse and have ambition. They breathe the world they are building from being music fans to digital culture natives. They already know what it means to succeed with a project in the music business. The premise is sweet - who doesn't like their old bedroom walls? - but reimagined for an accessible mobile AR world. For these reasons and more, we can't wait for our first exploration of metaverse and blockchain technology with XONE at Red.”

James Shannon, founder of XONE, said: “The original concept for XONE began with this idea that everyone has a place in the world where they can show off who they are. For many of us that was our bedrooms or, later, our Web2 social media profiles. But for the next generation of people coming online that place will be metaversal and deeply integrated into Web3. XONE is a place for them, combining the best of Web2 social with new technologies like augmented reality and blockchain.”

Alica Molito, founder of XONE, added: "XONE has the potential to revolutionise the way people connect and communicate. When imagining the future of social media, augmented reality tech becomes a true game-changer, with the potential to replace the smartphone as the primary communication device. Compared to current social media, users will have the ability to chat in an increasingly natural way - with avatars and holograms immersed in their home environment, enabling more meaningful digital connection and enhanced creative expression."