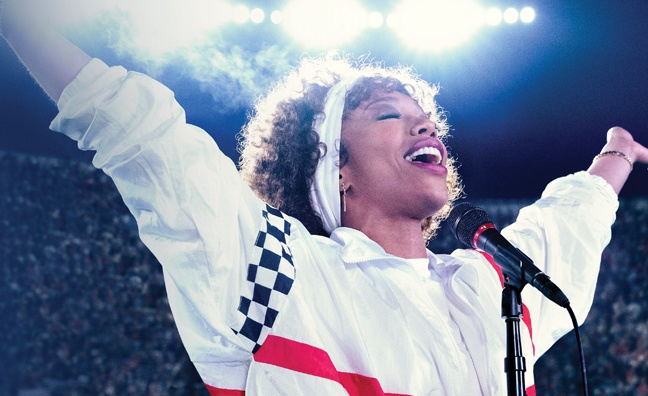 Whitney Houston biopic I Wanna Dance With Somebody is set to “significantly increase” music revenue for the late superstar.

Primary Wave has overseen an ambitious long-term plan for the Whitney Houston business since acquiring a 50% stake in the publishing, master recordings, name, likeness and brand in 2019.

The December 26 UK release of I Wanna Dance With Somebody, starring British actress Naomi Ackie, is set to further boost the icon’s catalogue on streaming platforms.

“From the moment we partnered with [sister-in-law] Pat Houston and the Whitney Houston Estate, we put together a three to five-year marketing plan,” said Primary Wave Music chief marketing officer Adam Lowenberg.

“We knew that the Whitney movie would be somewhere in year three, and we also wanted to make a very big moment out of Whitney’s 60th birthday in August 2023. So we were very strategic, we knew we had big moments happening.”

Directed by Kasi Lemmons, produced by Clive Davis and written by Anthony McCarten, who scripted box office smash Bohemian Rhapsody, I Wanna Dance With Somebody is building in terms of audience and critical anticipation.

As a former exec at Arista alongside Primary Wave CEO Larry Mestel, Lowenberg has a connection with Houston’s career and the legendary Clive Davis, who signed her.

“It really was the greatest education,” Lowenberg said of Davis. “You automatically grew into an executive working for him. I can’t wait to see what Stanley Tucci did [in the role].”

Lowenberg also acknowledged the huge success of 2018 film Bohemian Rhapsody at the box office, as well as the impact of Rocketman and Aretha Franklin biopic Respect.

“We have an advantage because there’s Primary Wave and Sony Pictures, plus Sony Legacy and RCA on the label side compiling the soundtrack, we’re all working together,” he said.

The soundtrack is set to feature reimagined versions of songs by other artists, alongside Whitney Houston recordings. Lowenberg said it will be a “very big part” of their efforts to reach a younger audience for Whitney Houston’s music.

“It will go a very long way to continuing the re-education and the introduction process,” he said. “Clearly, music is such a huge part of this movie. In the TikTok world that we live in, that enables us to maximise many songs from the movie and then the reinterpretation pieces as well.”

Primary Wave’s first huge moment since partnering with the estate was the reworking of Houston’s little known cover of Higher Love, which had been recorded in 1990. The Kygo remix peaked at No.2 in September 2019 and spent almost 50 weeks inside the UK Top 100 – the longest run for any of her singles. It has sales of 1,705,685 (Official Charts Company).

“Our whole plan was centred around Whitney Houston as arguably the greatest female voice of all time,” said Lowenberg. “[Higher Love] jump-started the entire marketing plan.”

Global streams for Whitney Houston passed three billion in 2020. Since Primary Wave has partnered with the estate, music streams have increased by 61%.

According to Official Charts Company data for the first nine months of this year, Whitney Houston collection I Will Always Love You was No.39 overall with sales of 81,426. The 1987 transatlantic chart-topper I Wanna Dance With Somebody (Who Loves Me) is at No.145 (248,035 sales in 2022).

Lowenberg said the film is an opportunity to elevate the catalogue to another level in terms of consumption.

“That is our goal, to have one or multiple songs from the Whitney catalogue go Top 10 or Top 20, and there’s no reason why they can’t – these songs are so timeless,” he said. “I would not be surprised to see one of the lesser-known hits rise to the top, because it’s going to have new life breathed into it.”

“We fully expect revenue to increase significantly,” Lowenberg added. “Our goal as the stewards of Whitney Houston is not just to have a bump [in sales], but how do we continue after the movie has its run?”

Future projects being lined up include an album of gospel recordings (“That is going to blow people away”), a Broadway show based on the film and a Vegas concept production. There are plans to bring back the hologram tour and more NFTs.

Merchandise activity was also key to Primary Wave’s plan. As well as an apparel range, official products recently launched include Funko Pop dolls, a cosmetics line and a fragrance.

“We saw dramatic increases in revenue in the merchandise,” said Lowenberg. “We were able to do all the social media activation around it and, of course, it was going simultaneously with Higher Love’s ascent on DSPs and radio.”

Following the release of the biopic, Primary Wave will be honouring Houston during its Grammys week celebrations.

“We’re in discussions right now to have a broadcast event,” said Lowenberg. “Those are the types of things that are going to continue to attract a new and younger audience.”

Primary Wave is busy on other projects, including a Bing Crosby film, and acquisitions. It follows a $2 billion strategic partnership with Brookfield Asset Management and CAA.

“There’s no other company that does what we do,” said Lowenberg. “It’s a different model, it’s a different mindset. And now with this Brookfield deal, we’re so well poised to dominate for the next 10 years.”