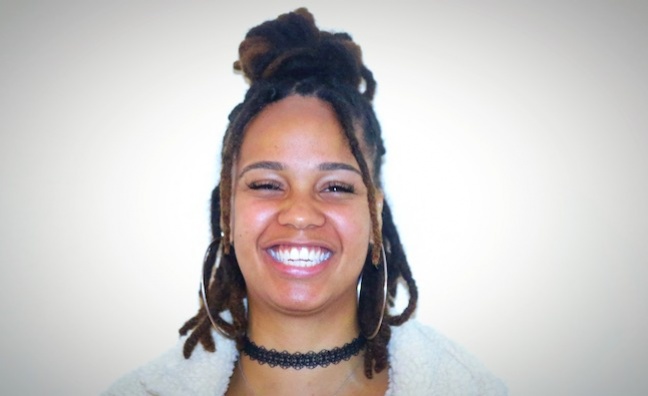 Ella-Bonai Gordon is an artist manager and A&R consultant. Having spent over five years at Renowned Management, working alongside Zeon Richardson, she recently left the company to go out on her own as director and senior manager of EBG Music.

The 26-year-old from Forest Hill discovered singer-songwriter Hamzaa in 2017 and since then she has guided her career from that of a mostly unknown act to a signed recording artist with a publishing deal, who is now positioned as one of the UK’s hottest young rising music stars.

Gordon also currently manages presenter, broadcaster and DJ Henrie Kwushue (Spotify’s Who We Be, Kiss), one of British media’s most exciting young personalities.

Gordon got her start in the industry as a 14-year-old working with her uncle at his social enterprise Bigga Fish, where she led sessions on events management and marketing. Her role gave her the opportunity to run youth events across the country, including ones where UK rap artists like Krept & Konan, Yungen and Chip showcased some of their earliest performances.

“I'll be lying if I told you this was all planned,” she says. “I had no idea this is what I was going to be doing. The 10 or 11-year-old me genuinely thought I was going to be a politician, or teacher. I didn’t even know the music industry existed.”

These days her motto is “Persistence beats resistance” and it is clearly working for her...

You got your start in the industry very early, at aged just 14, how did that prepare you?

“I was discovering a whole new world because growing up from where I'm from, you're very limited by what you see. All the jobs I saw were dustbin men, teachers, shop owners and lawyers, so I didn't really know anything but what I could see, so that visual representation is so important. That's kind of how I started in terms of getting my foot into the creative industry for events. And then I started to lead the Bigga Fish sessions, not only in London or Manchester, but we also had one in Cardiff and one in Bristol. At the really young age of 17 I was going on tour with artists like Chip, Krept And Konan, Yungen, and it is crazy when I look at how it shaped my future.

How did you get into management?

“After Bigga Fish I started thinking about becoming a tour manager but was told by someone that I would make a better manager. Then I got introduced to Zeon Richards at Renowned Management. I was meant to be with Zeon for two weeks and I ended up staying there for just over five years. When I started at Renowned, that's when I discovered my artist Hamzaa, which was the making of me. Like the whole experience, even just how I discovered her. I was with my ex-partner at the time. He was a presenter on radio, and she sent him her music. He played it out loud and I asked: “Who the heck is this?” He didn't want to tell me, but I went on Twitter, and found her myself.

“I met up with her the following day and the rest is history. I will never forget when I first met her, she was sitting in Crossbar in Hackney wearing a red bandana. You know when you meet someone, and you just know you're in the presence of someone incredible? I remember having a conversation with her and I found out she could play five instruments - all self-taught. And I also remember being on the phone to Zeon afterwards and telling him, ‘She's the one’. And it's funny because to this day, her number is saved in my phone as ‘The One’. Like she’s just greatness, the real deal, talent-wise and personality. And everything for her comes from a real place.”

You’ve done so much and are still so young, what would you say are the biggest lessons you've learned so far?

“Another thing is that it's okay to close a chapter, because me leaving Renowned was a big thing to me. But it's also okay to close a chapter and for things to be amicable and respectful. I feel like sometimes when you leave something everyone thinks someone did you wrong, but it was nothing like that, our visions just didn't align. And I'm so grateful for the opportunities that have advanced me, and I felt like last year was the right time to part ways. Also, standards are number one. I have standards of myself and a standard of my clients. No matter what happens outside of that, it’s about the standards you keep for yourself.”

What has been your career highlight so far?

“One with each of my clients. With Hamzaa it was when I got the call that she was going to be on Jools Holland. I was in Jamaica on the beach at the time. And this was like maybe a couple of weeks after releasing our single independently. It was just mind boggling. And it really changed her trajectory, as we got signed a couple of months later, then the following year we got a publishing deal. That for me was like a big ‘wow’ moment. With Henrie, it was the start of the ‘Is Your Area Changing?’ video series. The first idea that we did in Peckham cemented the vision and belief I had in her. It was at that point that everyone knew Henrie was different, that she was very special. Literally. I feel like that's probably been my two career highlights.”

You are currently on the MMF Accelerator Programme for Music Managers, which is supported by YouTube, how has that helped you?

‘It’s been an amazing process. So far, I feel like the community that they serve and have built, it makes me feel like I'm not alone. I'm alongside amazing people that are going to do big things within the industry. And now they're part of my network. It’s incredible what they’ve done and what they do with the Accelerator Programme. It is so much needed because I feel like there's so much pressure on managers, you absorb so many things from so many different people, not only your clients but people that work with your clients. I feel like managers are really underappreciated and overworked, so the programme is a good boost because we have weekly meetings where we can chat about what's going on, or you can just sit and listen. And it's good just to have that escape.”

Where do see your career in the next 10 years?

“I think I'm going to be part of a very successful management company, either me running it or me being very senior with a lot of successful clients on my roster. Yeah, that's what I can see.”