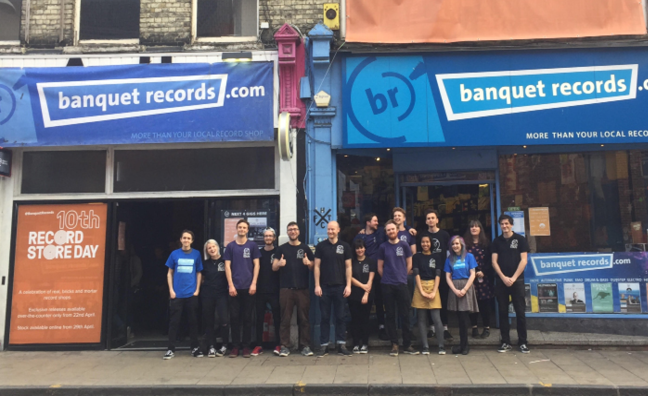 Black Friday is set to deliver a boost to UK record shops today (November 29) with a series of limited-edition releases.

While the annual sales event sees other retailers discounting products, the series of Record Store Day commissioned vinyl goes the opposite way and encourages music fans to invest in premium, one-off products.

Music Week spoke to Banquet Record's Jon Tolley on what this "Record Store Day" means for his Kingston shop.

How important are the Black Friday releases to your business?

"Just stating the obvious, the whole thing is that it's not a Black Friday sale. We're not racking up loads of crap that people don't want. Black Friday doesn't mean that for us, essentially it's a mini Record Store Day. There's about 150 titles available, for Record Store Day  it's about 750, so if you think of it in pure numbers, it's about a fifth of a Record Store Day. For us, Record Store Day is what we build our business year around, so having a mini version of those just in time to get stock in for Christmas is really good. On a business level, and as a record collector, there are loads of really great records around this year, it's really exciting. [Anything that has] People queuing up and making a special trip to town centre is really good."

Has the message that you're not having a sale like everyone else, but instead have limited edition vinyl available, got through to consumers?
"To the Record Store Day customer, it has. The person who has previously queued up overnight to get a Bowie record or something, they know what it's about. But the random passer-by, who may be just buys CDs they just want to put in their car, they will still think Black Friday means sale. So there is a bit of educating them about that. But because we don't generally try to stock stuff that we would go into the sale anyway – we're we're not the race to the bottom lowest common denominator, we're trying to stock premium stuff that people will love forever – it's quite an easy thing for us to say 'No, we don't have a sale, but it's a mini Record Store Day!' people get it. As soon as you say Record Store Day, people know what that is."

Are there any of this year's releases that have caught your eye?
"There's loads. For me, that Arcade Fire seven-inch of Neighbourhood #1, the opener of one of my all-time favourite albums, stands out. I think that Billie Ellish cover [When The Party's Over] by Lewis Capaldi that's going to be one of the first to go. There's something for everyone, you've got U2, The Doors, Alice Cooper, American pop punk band Knuckle Puck, we'll do a couple hundred copies of that. There are lots to choose from. People might scoff at how unlimited the U2 record is, for example, but they're a stadium band so when you scale it up, it is actually quite limited and that will fly as well. Same with Bruce Springsteen. It's the big hitters in this, mostly from the majors, but you know, that's the world, and we'll do well of it. It'll be certainly the top five days of the year for us money-wise. Probably Top 3."

Looking ahead, how is Christmas 2019 feeling so far?
"We're quite reactionary to it. So it's not really for us to say, 'Quater four looking like this.' Our challenge is to make sure that whatever demand is created, can be fulfilled. So that's what we're looking for. Having said that, having a Stormzy album out just before Christmas is brilliant, it will double what we sell. Having Harry Styles out just before Christmas is brilliant too. These things work for us. But actually, what we'll be selling as much of, is all the big albums from throughout the year – the likes of Sigrid, Mumford & Sons. They're not Christmas albums, but they are the big albums that have come out throughout the year, which we are supportive of and have in good numbers."

Having a Harry Styles album out just before Christmas is brilliant

And more generally, how are things at Banquet right now?
"I hate to bring it down to finances but if I say that we're 70% up on last year, then that shows that we're busier. We're in a fortunate position now. Three or four years ago, we were one of those 'cheques in the post, we're going to pay it' kind of thing. Now we don't have the cashflow problems, we're finding it a bit easier to take risks and to go a bit longer on certain titles that we think will sell through. Having extra space means that we've got an almost warehousing facility, which we didn't have before. As long as we keep getting all these indie exclusive records – which everyone seems to understand the worth of wow – then it's good. It's just opening the doors and the people already know about it. There's a lot of talk about the death of the high street, but we're in a really fortunate position where our suppliers are making the high street necessary. It's not necessarily the indie shops who are providing this great USP, it's the fact that we have a product which you can only buy from us and it's bloody brilliant! I wish that model would go over to other high street stores. There's no reason why skate stores can't have clothing that's only available from there, that type of thing. I wonder if it can be replicated. Right now, things are busy and sustainable, we're not just surviving off people's passion. It's actually like a business model, which works as well."