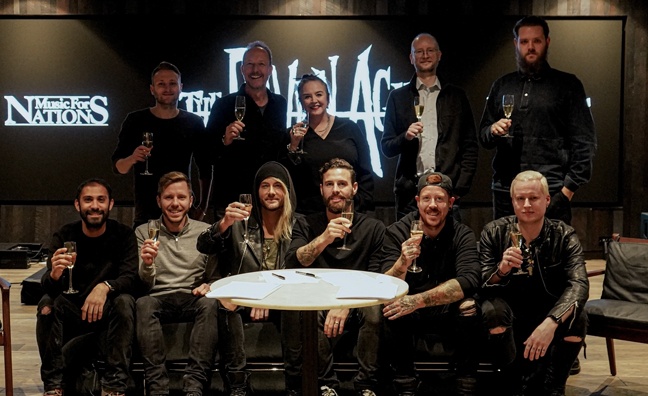 The Raven Age have signed a new worldwide deal with Music For Nations/Sony. The group are set to release their third studio album via the label during summer 2023.

The Phantom Management act have previously achieved over 35 million streams to date, and a Top 30 US Radio single with single Fleur De Lis. Since forming, the group have played with a host of the biggest names in rock and metal, including Alter Bridge, Killswitch Engage, Mastodon, Iron Maiden, Volbeat, Tremonti and Godsmack. They have also made mainstage appearances at at Download Festival and Mystic Festival.

An official press release added that alongside the release of their new album, the band have “a huge international touring plot planned for the year ahead.”

Speaking about the signing guitarist George Harris said: “Spirits are high in The Raven Age camp right now. We’re absolutely ecstatic to be working with such an awesome team at Music For Nations and to get the ball rolling with the long-awaited new album campaign. It’s a serious achievement for us, I’m super proud of all the lads and everyone involved. Bring on next year, it’s going to be a cracker."

Singer Matt James (MJ) added: “We feel extremely excited to be starting this new chapter with such a prestigious metal label. Our long-awaited new album finally has the platform it needs, and we can’t wait for 2023!”

The Raven Age have already accomplished so much on their own, and have an exceptional management, press and booking team around them already, we are excited to take them to the next level of their career

Music For Nations have presided over some of the most notable rock and metal success in recent years, including Tool’s Fear Inoculum (on sales of 39,720 according to Official Chart Company data) and Porcupine Tree’s 2022 No.2 album Closure/Continuation (18,731 sales).

Welcoming the band to the label, MFN director Julie Weir said: “All of us here at Music For Nations are overjoyed to welcome The Raven Age to the label family. They have already accomplished so much on their own, and have an exceptional management, press and booking team around them already, so we are excited to take them to the next level of their career with support from our own structure both in the UK and internationally, to grow their influence and fanbase.”

The Raven Age’s forthcoming album will be the band’s first with new guitarist Tommy Gentry and they have also teamed up with Matt Hyde (Slipknot, Bullet For My Valentine, Trivium), Mika Jussila at Finnvox (Nightwish, Children of Bodom & HIM) and “several other special guests” which are to be revealed at a later date.