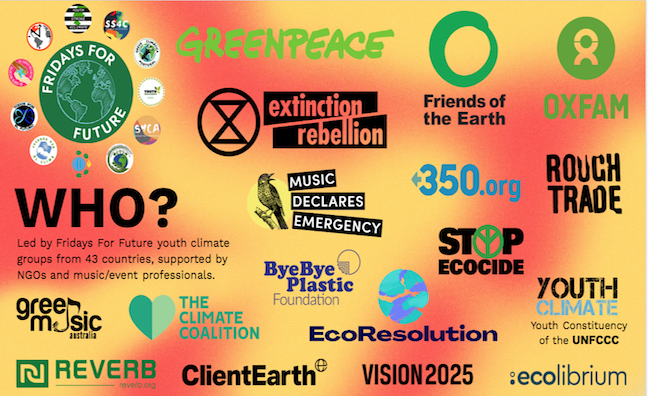 Glass Animals, Declan McKenna and Sam Fender are part of a group of artists and activists who have announced the launch of Climate Live, an international series of concerts slated for 2021.

Climate Live will comprise concerts across 43 countries during next year, with the first events slated for April in the UK, USA and Japan.

A host of names including Greta Thunberg, Groove Armada, The Wombats, Ida Young, Sundara Karma, Thomas Headon have today (November 20) published messages to mark the launch of the series.

The gigs are set to take place on April 24 and October 16th, 2021, with line-ups to be confirmed. The project is led by members of youth-focused climate groups Fridays For Future, with support from artists, activists and scientists. Each concert is planned to be as sustainable as possible.

Music Declares Emergency is one of a group of organisations supporting the events.

Founder, Frances Fox, 19, said, “I started Climate Live in Spring 2019, after being inspired by an interview in which Brian May said there should be a Live Aid for the climate crisis. I thought this was a brilliant idea to engage more young people in the movement, with our own spin, so immediately started messaging activists from all over the world!”

Glass Animals’ Joe Seaward said: “Time is running out for the planet as we know it. We must act now if we’re going to save it. The youth activists who are standing up need help and those with a voice have a responsibility to use it.”

Christiana Figueres, former executive secretary of the UNFCCC, said: “There is no doubt that young people, informed by science, have brought the climate crisis to the attention of leaders from all sectors. It is now our generation’s responsibility to protect what we love from the damages of climate change by following up on promises with the necessary actions in this decade, to fulfil the goals of the Paris Agreement. I applaud our brilliant young people for stepping up again to hold leaders to account in the lead up to COP26 in 2021, when countries must come together to show we are on track for a resilient future. Our young people have asked whether we can hear them. It is time to demonstrate that we are truly listening.”

Time is running out for the planet as we know it

Mitzi Jonelle Tan, 23, convener of Youth Advocates For Climate Action Philippines, added: “We have just experienced four typhoons in the span of a month. I had to sit in the dark without electricity, not able to go home because the roads to our house were flooded up to the second floor of houses. This is the climate crisis, this is why we need action. We are the second most vulnerable country to the impacts of the climate crisis in the world. It's a scary thing and we desperately need more people out on the streets if we want to see change. Climate Live is the perfect way to do that.”

Kevin Mtai, the 24-year-old founder of the Kenya Environmental Activists Network, said: “Climate Live is beyond just music. The climate crisis isn’t just an issue of the far-off future, it is today and we are experiencing the impacts right now. We need to act now.”

“Climate Live will give a voice to those most affected by climate change and to the millions of young people concerned about the future of our planet,” added Timi Barabas, 17, from New Zealand.

Andrea Manning, 22, said, “Climate Live is critical at a time when the climate crisis has become less prominent in the public eye,” while Nicole Becker, co-founder of Jóvenes Por El Clima Argentina said, “We need more people, and Climate Live is the opportunity for this to happen.”