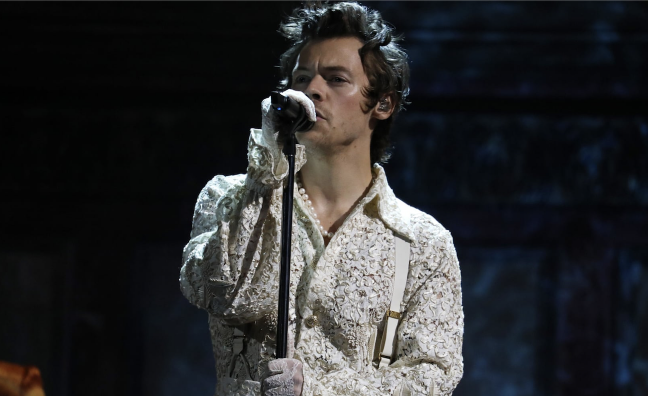 Harry Styles is developing into “one of the most accomplished artists of his era”, according to Wembley Stadium’s James Taylor.

Taylor is senior commercial manager at Wembley Stadium, and has spoken to Music Week about the singer’s upcoming shows at the London venue on June 18 and 19.

Yesterday (March 23) Styles announced the release of his third solo album, Harry’s House, which is due on May 20 via Columbia Records. Now, fans have a sure sign that Styles could air new material at his upcoming Coachella headline shows in April.

Styles was originally due to tour his second album, Fine Line, in the UK & Ireland in April 2020, only for the dates to be pushed back a year before being postponed indefinitely due to the coronavirus pandemic. The rescheduled dates in Glasgow, Manchester, London and Dublin were upgraded from arenas to stadiums. He won Tour Of The Year at the recent Pollstar Awards.

As anticipation builds ahead of Styles’ return to the UK & Ireland, Taylor told Music Week that booking the two dates made for a record-breaking year at Wembley.

“We have had Harry headline before as part of One Direction, but what an amazing achievement to come back off the back of such astronomic solo success,” said Taylor. “Ticket sales were very strong and the second show being added actually made 2022 a record year for Wembley Stadium. We will host 15 nights this year, which is a new Wembley record for concerts. It’s a great way to welcome fans back to Wembley after a two season absence due to Covid.”

As the venue prepares to welcome Styles to its stage once more, Taylor talks us through what to expect…

How was the booking process to get these dates in? And why is Wembley Stadium the right place for Harry's show?
“When you get to the scale that Harry has now reached, his management felt that Wembley Stadium was the logical next step for his career and we had no hesitation that the shows would do well. We were in a position to lock in the dates he announced and we pulled together a plan in partnership with his team. Harry was the biggest ticket seller worldwide in 2021 and that provided the basis to launch a stadium tour.”

What can we expect? Have you had any inklings of how it'll look and feel inside the stadium?
“Given there are now two sell-out shows I think we can expect an amazing atmosphere as we bounce back from two dry years of stadium concerts. You know a concert is popular and going to sell well by the amount of house list requests we get, and that was certainly the case both before the on-sale and soon after when the shows sold out quickly.”

A devoted fanbase can create an unbelievable atmosphere in the bowl

Lastly, what do you think we will learn about Harry, his artistry and his abilities as a live performer from these gigs?
“Harry is fast developing into one of the most accomplished artists of his era and I think these solo shows at Wembley will cement that position. I believe he will likely go on to do several stadium tours in his career and we would very much welcome him back...”