V Festival to rebrand and expand in 2018 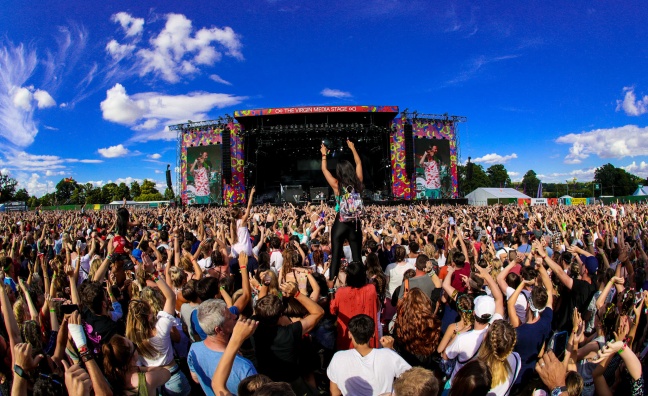 V Festival is set to be rebranded in 2018 following the withdrawal of headline sponsor Virgin after 22 years, Music Week can reveal. The new name for the event will be announced next month.

There’s been speculation about the future of the twin event, staged in Hylands Park, Chelmsford and Weston Park, Staffordshire by Live Nation in partnership with SJM, Metropolis and MCD. But Festival Republic MD Melvin Benn has confirmed to Music Week that it will continue at both sites under a different guise.

Benn said he was “very grateful” for Virgin’s sponsorship over 22 editions of the V Festival.

“The festivals will continue, we have the announcement later in November of the replacement name,” confirmed Benn. “We are looking forward to the new festival now, it’s just something that we are incredibly excited about.”

The new event will take place over the same weekend in August with plans to expand from two to three days at both sites.

“It will very much continue to have a pop and dance focus,” Benn added. "We will have a complete refresh and it's likely to go to three days. I believe the demand warrants it - the demand and the talent are out there."

Benn described the "long-term commitment" to the new event. "We wouldn't be embarking on headline sponsorship," he added.

Looking ahead to the first edition, Benn said he was "very confident" about headliners. "Generally across all of the festivals, it feels very strong - it feels like music's in a good space," said Benn.

In a statement, Richard Branson said Virgin was “proud” to have sponsored V Festival for the past two decades.

“Being part of V Festival has been an honour and there are some amazing moments that will stay with me forever – including introducing Paul Weller and welcoming V2 Records’ first signing The Stereophonics to a massive audience,” said Branson.

He added: “Who would have thought that an idea to sell cut-price mail-order records would grow into a record label, let alone a unique music festival – and so much else besides? We wish Live Nation every success with their future plans. We would like to thank them for a brilliant partnership over recent years.”

Branson said the company had other plans in the live music space, including its investment in Sofar Sounds.

In recent years, V Festival faced competition from city-based festivals and boutique events, but the event consolidated its longstanding status in the festival calendar by focusing on pop acts such as Justin Bieber and Rihanna last year. Pink and Jay-Z topped the bill this summer, though Music Week reported last month that ticket sales had been slower than usual, particularly at the Stafford site.

But Benn described what turned out to be the final V Festival as an "amazing" swansong.

"I thought it was really fantastic, Jay-Z and Pink did us proud," he said. "It has been a fantastic association with Virgin, but things move on and it's time for something new to be created."

Festival Republic's parent company Live Nation acquired a stake in the annual events back in 2013 via its LN-Gaiety joint-venture.