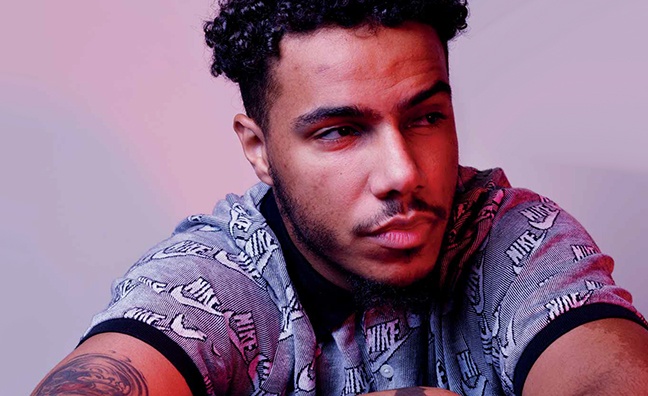 In the latest Music Week cover story, AJ Tracey and his team describe the his journey from making music in youth clubs to become one of the biggest names in UK rap.

His rise is a success story for independent music, with a growing live profile and gold-selling Top 20 single in Butterflies testament to his success. The West London MC’s team is built around manager Andy Musgrave, Earth Agency’s Rebecca Prochnik, Wired PR and tour manager Abigail Stein.

Earlier this week we heard from Tracey about what it takes to make it as an independent rap star. Here, manager Musgrave – who founded label Crazy Legs in Bristol and manages a roster including producer Murlo – opens up about the story so far.

Let’s start with AJ’s versatility. He’s unafraid to change things up with each release…
“It’s part of moving from a hyped new act into a solid act with longevity, you have to make these steps and be prepared for a bit of backlash when you change things, but you have to change things otherwise you become one-dimensional and there’s a time limit on that. He’s one of the best lyricists in the country by quite a stretch. There are tracks on the album that will completely solidify that. He’s got an amazing level of wit. You can’t confuse him or argue with him, he’s very sharp.”

What does an independent artist need to do to be successful?
“AJ is a natural and we understand the importance of the fans as an independent act. Our marketing is social media. AJ has exceptional cultural understanding and knows where he fits in the marketplace, he wouldn’t be able to articulate it in ways a marketer would understand but he has an instinctive understanding of things, what to say and when to say it. You need patience. It doesn’t work for anyone straight away. When you do a deal with a major you get money in your pocket to help you through that early stage where it doesn’t work yet, but you don’t get that as an independent. You have to be very aware of your financial situation.”

What are your responsibilities as manager?
“You just get a constant sense that the old music industry is trying desperately to cling onto its old model. My job is to protect my artists’ interests and help them build a business, not just generate money so a team of 30 people at a label can get a wage. I’m not anti-labels, there are some amazingly talented people at the labels. There’s a certain work ethic that comes from the independent model that you just don’t find in the major system. If you’re a musician it’s 24/7. It constantly amazes me how many people in the industry don’t come at it with the same ethos but still aspire to make a living off the culture. It’s so important to let young artists know that you can go this far without giving your rights away. It doesn’t work for all artists, some need help with creativity, but if an artist knows where they’re going then you can do this. You don’t need to go in to a system and be packaged as a product.”

Will you ever sign a deal?
“I want to see how far we can go by ourselves. It’s not that we’re against ever doing a record deal, I just want to see how much we can do by ourselves, just so we know. A lot of artists do deals because they don’t know how much power they have without; there’s been a huge land-grab over the last couple of years for labels to get whatever rappers they can. It’s making people jump into deals that maybe aren’t in their best interests. There’s no one unsigned! People are getting signed off the back of a freestyle on Mixtape Madness.”

How far can AJ go?
“In the UK, Dave and Fredo opened the door with their No.1 with a street record [Funky Friday]. That means anyone can do it. Any artist who’s grown a following via social media can fly up the charts if they’ve got people behind them. It’s open season in the UK, it’s taken a long time for black music to break though here.”