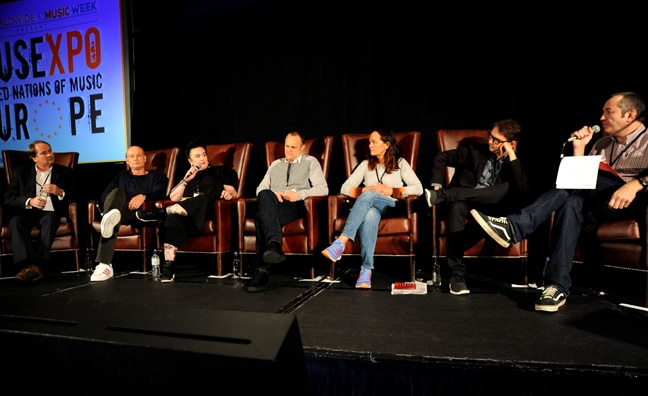 From September 19-20, the great and good from across the industry descended upon London’s Millennium Hotel for what proved to be an insightful and eventful MUSEXPO Europe, organised by Music Week and A&R Worldwide.

Over the course of two days, a raft of music biz trailblazers came together to discuss the most pressing challenges facing the business by way of panel sessions, on-stage Q&As and keynote addresses.

Topics that fell under the spotlight ranged from streaming, the role of artist managers in the digital age, the future of A&R and sync opportunities, to the state of the live sector, the evolution of radio and whether or not data is on the way to trumping gut instinct when it comes to uncovering new talent.

Many of the sessions drew impassioned responses from panellists, resulting in a particularly animated closing session on day one – those of you who were present will know which one we’re talking about...

Away from the conference, there was still plenty on offer. A live showcase of new talent at Oxford Street’s 100 Club boasted a strong crowd, while the post-panel networking receptions went down a treat.

Last, but by no means least, was the closing gala dinner, in which Island Records president Darcus Beese was honoured with the first ever MUSEXPO Europe European Executive of the Year Award. A well deserved accolade, Beese was met with a standing ovation from an audience of the industry’s finest when he was presented with the award.

With so much to take in over the course of the event, we’ve compiled 10 of the best moments from MUSEXPO Europe 2016 for your perusal. Enjoy...

The Island Records president, Darcus Beese, was recognised for his contribution to the music industry at the show as he became European Executive of the Year. Beese took part in an on-stage interview with Music Week editor Mark Sutherland, in which he said that it is up to labels to address the difficulties that come with breaking new acts.

Commenting on the fact that only two UK debuts featured in the Top 200 for the first half of the year, he said: “We all have to take responsibility for the fact that little has broken this year. We can’t blame the market – it’s in all of our hands.”

Disturbing London general manager Damaris Rex-Taylor called into question the validity of record labels in 2016 during a panel session on marketing and monetisation. She said: “There are loads of unsigned artists that are doing really well with brand partnerships.

And it’s not just on brand partnerships; we all know the whole model is changing. The business of selling records is just...It sounds silly. A record label doesn’t really make that much sense in this day and age - purely because of the way people consume music.”

There was plenty of fiery debate and colourful language during day one’s closing panel, as JEM Music founder Colin Lester and artist manager Sammy Andrews butted heads over the direction the biz is headed. On the topic of promotion and geo-blocking, Lester said: “If I had never separated releases into rest of the world and US, I’d have never had a platinum record. You cannot do the whole world together.

If you want to sell globally, it’s a completely different plan from a manager’s point of view than putting something out in the UK.” Andrews was unconvinced. “With acts of a certain age you’ve got no chance of geo-blocking, and to do so would be detrimental. It’s about changing the strategy and accepting how it is now. Part of our industry’s problem is not accepting these changes.”

The A&R panel that closed Tuesday’s conference saw an array of leading A&R figures speak in favour of gut instinct over data when deciding which acts to sign. Korda Marshall, EVP of music, BMG, stated: “I’ve never been a fan of stats.

So many great acts would never have made it through if we relied solely on data. Today’s content gatekeepers won’t let anything in without data to back it up.”

Jeff Smith, head of music for BBC Radio 2 and 6 Music, joined the ranks of those in favour of gut over stats, as the issue reared its head in the evolution of radio panel. ”We don’t really use [data],” admitted Smith.

“There’s so much of it that you can just blind yourself with science, so we don’t. We just use our ears to judge the music, which I think is the important factor.” Edward Kershaw, CCO at 7Digital did, however, did stand up for data: “There are ways of using usage and taste metrics that really can inform the way that content is put together for clients.”

6. Ben Cooper calls out an entire audience on their bathroom habits

He then revealed details of 25 hour-long downloadable ‘phone first’ music playlists a week for Radio 1 and 1Xtra. He also managed to get the entire room to admit to using their phone whilst on the loo.

The live panel championed the rise of boutique festivals across the UK. “People over the 16-24 age group don’t necessarily want to sit in the Glastonbury mud, so a lifestyle event or a smaller festival offers a different option.

Commenting on the lack of breakthrough acts in 2016 so far, Virgin EMI president Ted Cockle offered his view that the standard of music from new acts in 2016 has simply been below par. “People have not been good enough with the stuff,” he said.

“The standard and quality of some of the things released were not good enough to justify 100,000 people turning out and buying an album. There’s a lot of interesting music, but in terms of something that appeals to a wide percentage of the population it hasn’t been great.”

According to UK Music chief executive Jo Dipple, it’s a bit of both. Speaking on the opening day of the conference, she commented: “The biggest threat to the industry is the post-Brexit regulatory and legal environment.

And it’s also our biggest opportunity. It’s a huge opportunity if the government gets its act together and gets the market right. But it’s also a big threat, because coming out of Europe, where our legislation originates from, means we’ll be in a new world.

If the UK government can get the digital economy bill to represent rights holders in the way we want them to, there’ll be a massive opportunity for the UK market.”

It seems that the imagination of Matt Bellamy and co knows no bounds, as Muse tour manager Glen Rowe hinted at what the band’s next tour might look like. “We want to do a stage made of magnets so the band can levitate on other magnets,” he said.

“It’s those questions that keep me awake every night of my life. If there are any magnet technicians out there, please come and see me because that’s what we’re trying to achieve.”