MUSEXPO Europe gets underway with panel of industry heavyweights 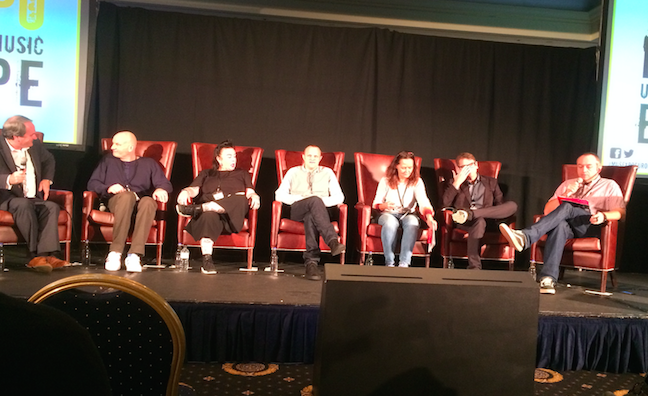 The MUSEXPO Europe conference got underway with a bang this morning, as a panel of industry heavyweights assembled to discuss the big challenges and opportunities facing the music biz.

Among the topics covered were the key issues facing each of the panelists’ business, as well as the closure of UK venues and clubs such as Fabric and the potential effects of Brexit.

“The biggest challenge we [BBC Music} face is riding two horses – the big linear beasts and also being fit for the digital future, thinking about how we operate in digital spaces in an Internet dominated world,” Shennan said. “We have 15 million people listening to and loving Radio 2, but we are in a world dominated by the global beasts of the Internet and we need to be able to find out place in that world.”

Commenting on music listeners’ growing uptake for singles over albums, Cockle commented: “Whilst the album remains the key construct for artists, the streaming world means that album format is being pushed to the margins, so we’re always trying to balance what an artist would like to do and what the public method of consumption is now heading towards. For established artists it is easier, but for younger artists it is something we have to get our heads around progressively and fairly quickly to make sure artist feel that we are representing their talent appropriately.”

Moot added: “People don’t have the time to listen to albums and give things the benefit of the doubt like they used to.”

Dipple, meanwhile, focused her attention on the post-Brexit fallout, stating: “I think the biggest threat is the post-Brexit regulatory and legal environment. And it’s also our biggest opportunity. It’s a huge opportunity if the government gets its act together and gets the market right, but it’s also a big threat because coming out of Europe, where out legislation originates from, means we’ll be in a new world. If the British government can get the digital economy bill to represent rights holders in the way that we want them to, then there’ll be a massive opportunity for the UK market to be the strongest place for UK-generated IP to find its feet.”

Regarding the live sector, Parsons offered his view that market looks as prosperous as ever. “The live sector is booming and opportunities are at a macro level.”

As conversation shifted to the challenge of breaking new artists – Music Week revealed earlier this year that only two of the Top 200 albums for the first half of 2016 were UK debuts – Cockle argued that the talent simply isn’t there, as opposed to there being a problem with allowing new talent to rise.

“People have not been good enough with the stuff. The standard and quality of some of the things released were not good enough to justify 100,000 people turning out and buying an album. There’s a lot of interesting music, but in terms of something that appeals to a wide percentage of the population it hasn’t been great."

Parsons and Cockle were also vocal on the recent closure of Fabric.

“Fabric’s closure is completely outrageous and should be a call to arms for the industry,” while Cockle described the closure as “depressing on so many levels – we don’t seem to be shutting down pubs for the degree of alcoholism in this country.”

For more on MUSEXPO Europe and to view the event schedule in full, please visit http://musexpo.net/MUSEXPO_EU_2016/schedule.php and follow us on Twitter at @MusicWeek.