On The Radar: Aitch 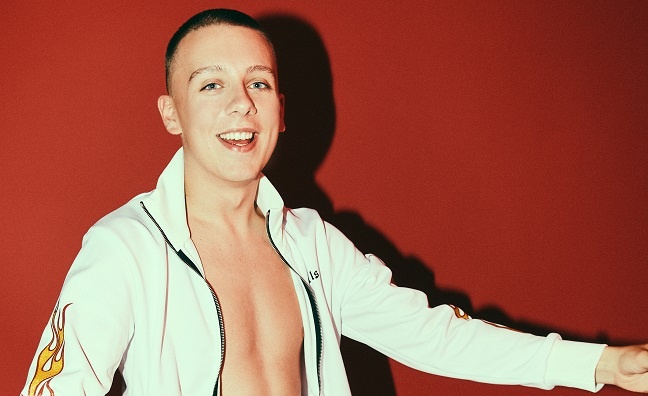 Having a conversation with Aitch is like shaking up a big bottle of Coca-Cola and chucking it against a wall. The 19-year-old rapper’s sentences fizz and gurgle, a torrent of thick Mancunian vowels. Real name Harrison Armstrong, Aitch grew up in New Moston, a few miles North East of Manchester’s city centre (“It’s vibes, a different little world, it might be in the water,” he says). He’s down in London for promo ahead of his AitcH20 EP, released this week on Since ’93. With current single Taste (Make It Shake) sitting pretty at No.6 with 117,621 sales to date according to the Official Charts Company, he’s in a buoyant mood, but you get the feeling he’s always like this.

“It’s been mad, it’s been a sick year,” Aitch begins. It quickly becomes apparent that those are his favourite adjectives. “It’s non-stop, it’s hard to explain. Everything’s going to plan, better than we wanted,” he continues. “We knew we’d be in this position, we just didn’t think it would be in this space of time.”

It's been a sick year

Along with his new single, Aitch features on Strike A Pose by Young T & Bugsey (at No.14 when we speak and climbing) and charted alongside Jaykae and Bowzer Boss with On The Way Home in May. He adds bars to a new remix of Ed Sheeran’s chart-topping Take Me Back To London, and Robbie Williams posted a video of himself lip-syncing to Taste… recently. Aitch has a good laugh at his brush with pop’s big leagues. “I’ve got love for Ed, and it’s a sick tune,” he says. “He’s easy you know bro, he’s like any one of the mandem. I knew he was going to be humble, he doesn’t seem the type of guy to be all flashy and that. He was just calm, not pretending to be anything other than what he is.” As for Robbie, Aitch says, “I didn’t expect that one either. He put it on Twitter, I don’t use it, but I saw lots of screenshots and ended up logging in and having a look. It was sick.”

As well as his fresh, propulsive take on UK rap, Aitch is winning hearts and minds with his personality. His breakout Straight Rhymez freestyle is heading towards 14 million YouTube views, and he’s harnessed that engagement. “No one really carries themselves like I do, the way I move on the camera and whatnot, I’m just being myself. A lot of people don’t really want to do that,” he says. “Straight Rhymez went viral, and from then everything I put on the internet just went viral, well, not viral, but you know. Once you build that platform, it stays there. You can’t go from 500,000 followers to 200,000, it’s impossible, it’s just going to carry on going up, and the fans are going crazy right now.”

Aitch does similar when we ask for his tips to make a perfect freestyle. “Ooohh that’s a good question. First, don’t try too hard to make the best video ever, it just won’t happen,” he advises. “Be yourself, look comfortable and like you think, ‘I’ll boss this, I’m the best’. If you think that, then won’t everyone else?” He says AitcH20 is, “the last taste of this type of Aitch people are going to get” and promises to go deeper with his upcoming releases. He is turning 20 in December, after all (“I’m going to be happy and unhappy at the same time”). Really, though, Aitch just wants more. “You can’t ignore hard work,” he finishes. “I just want to carry on.”