On The Radar: Communions 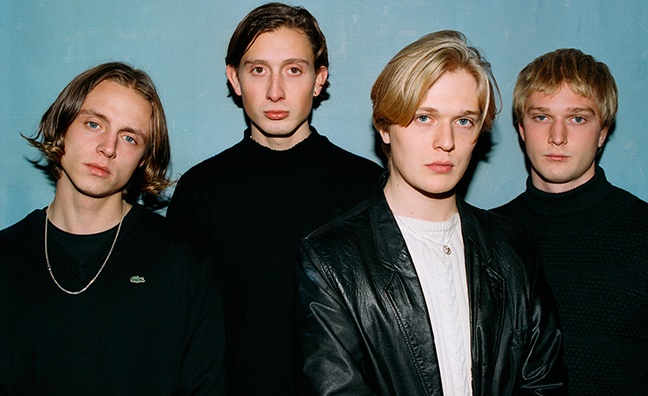 Communions are on stage in a dark basement. Directly in front of them, a knot of maybe 20 boys who look just like the band – Harrington jackets, turtlenecks, dark denim, perfect hair – jump on each other, spilling over the lip of the stage as the Danish foursome’s choruses hit.

It looks euphoric, a neat visual representation of the emotion and vitality of Communions’ sound.
That was in November 2014 at The Sebright Arms in east London, and frontman Martin Rehof remembers it well. “That was really cool, one of the most fun shows we’ve played,” he says.

Communions have changed since then. The lo-fi rumble of their self-recorded Cobblestones EP (released in February 2014) has gradually been eroded by every release since, and debut album Blue puts their strong melodic sensibility front and centre.

Guitarists Rehof and Jacob van Deurs Formann weave endless webs of indie-pop melody throughout a record that alternately recalls The Smiths, The Cure and The Stone Roses, high production warming up the cold edge of the Copenhagen punk scene that swaddled the band in its infancy.

They formed at high school after Rehof and his brother, bassist Mads, moved back to Denmark from Seattle, where they spent most of their childhoods.

Rehof says Blue “feels almost like a compilation of the last few years”, emphasising the contrast between it and the idea of a studio record. “I’m always thinking about the next thing, I’m never really 100% pleased no matter what I do, that’s how I’m wired,” he adds.

Either way, he’s doing the album a slight disservice – Blue is resplendent as a statement of Communions’ identity.

We spend the rest of the conversation trying to pinpoint the precise feelings evoked by the surge, clatter and twinkle of tracks such as She’s A Myth, Don’t Hold Anything Back and Eternity. On top, Rehof’s lyrics are nostalgic, youthful and hopeful. You could call it melancholy.

“The importance we put on melody has something to do with it, we’ve found a formula where all these different melodies play against each other,” he says. “But I don’t know if I have an answer to explain how we get the feeling, maybe it’s unconscious.”

While he acknowledges it may have something to do with the band’s closeness (“It’s brotherhood, a bond, I hope people can feel that”) he says they never think about it.

“It’s nice to try and remember but when you’re in it [making music] things just happen, you don’t think. It just manifests itself.”

In fact, the only thing Rehof specifies as something Communions do deliberately is “strive not to just be a gloomy band, or a happy-go-lucky band, it’s a mesh of those two states of mind”.

After a few moments’ consideration, he applies the same logic to the word melancholy. “Most of the music that hits me that way is melancholic, but I don’t think that has to necessarily mean sad, it can take many different shapes and sizes,” he says. “I think good music will make you feel melancholy.

That’s an important element to have.”

In the end, we settle on soul. “It’s like the music has soul or something…” Rehof says. “That’s a genre, but it’s also something that good music has, you can’t really put your finger on what it is, it’s just there or it’s not there.”
Communions have buckets of the stuff.