On The Radar: Priests 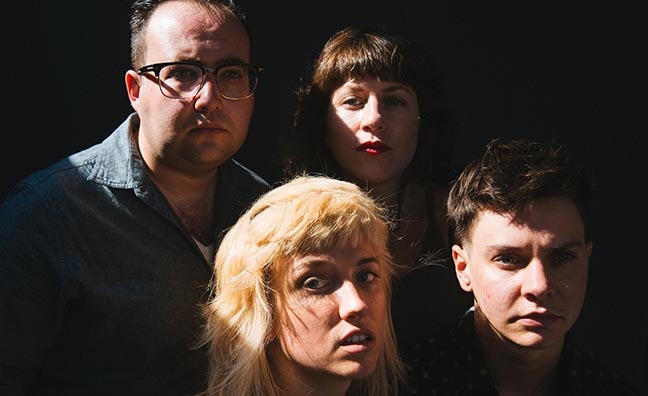 Katie Alice Greer has a big, blonde bone to pick. Priests’ singer is fed up with her band’s debut album being aligned with the presidency of Donald J Trump. A heavy whirl of surf-rock and punk, Nothing Feels Natural was released on January 27, a week after Trump began his presidency. “People kept tying it into our storyline, which felt weird,” she says. “I hope people can listen outside that context, it’s not the one we wrote it in. The record is meaningful outside of the world’s political climate.”

On inauguration night Priests – completed by guitarist GL Jaguar, bassist Taylor Mulitz and drummer Daniele Daniele – played No Thanks: A Night Of Anti-Fascist Sounds, a benefit show. It went down in their Washington DC base, and Greer helped organise it, so it was easy to join the dots. However, had things gone according to plan during Priests’ ill-fated, relationship-snapping initial recording sessions, the record would have dropped the previous November.

Releasing it via their own Sister Polygon Records (home to their previous releases including 2014’s Bodies And Control And Money And Power EP) the band enlisted a publicist and booking agent for the first time. “I was pitching to the publicist a month before we wanted to release it, so he needed more time. I was impatient, but I’m happy we compromised,” says Greer.

I don’t care about genre or confines, we just never want to be bored!

Eight months later, Greer says the process hasn’t changed her musical sensibilities (“I don’t care about genre or confines, we just never want to be bored!”) but Priests have become “a little more professional”. Just don’t expect to see them ligging in the bosom of the music biz. “I feel fully part of the industry now,” Greer explains. “I’ve worked other jobs and, as most people do, complained about my shit job and shit industry. I finally came to a place where I thought, ‘Every job is bullshit,’ you know? The problems that I have with the music industry still exist, but if I wasn’t working here, then I’d be working in hospitality or wherever.”

But that wouldn’t offer Greer the same release. Priests based their first practice on a quote from Lydia Lunch in no wave documentary Blank City (“Play music like you’re inventing the fucker!”), and Greer says the band acts as salvation from “the abyss of depression or hopelessness”. That purity still defines Priests, and UK fans will be able to tell as much when they tour here this week. “I’m so excited to come over,” she says, thoughts of playing live prompting her to end with a slice of philosophy. “Nobody can really invent music, I hope we’re playing it to celebrate it, or celebrate humanity, corny as that sounds…” There’s a pause while she suppresses her laughter. “Wow, I can’t believe I just said that out loud...”