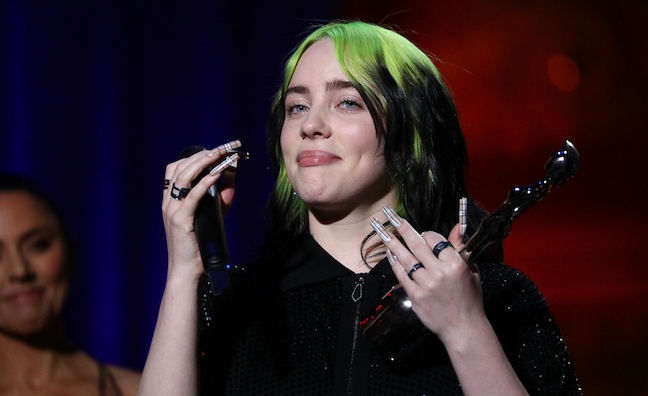 The BRITs ceremony helped deliver a sales boost for winning artists and performers.

While ratings dipped this year a series of strong performances sent albums back up the charts, or consolidated current Top 10 success. With only two full days of chart sales since the awards, the BRITs effect could yet continue into the next chart week.

Lewis Capaldi narrowly missed out on No.1 with Divinely Uninspired To A Hellish Extent (EMI), which increased sales by 20.2% week-on-week (17,537 units, according to the Official Charts Company). Already a chart topper, it lost out this time to Justin Bieber’s Changes by 144 copies. Song Of The Year winner Someone You Loved climbed 6-7 on singles.

With New Hope Club debuting at No.5, Virgin EMI has three albums in the Top 5 this week. It’s had three No.1 albums so far this year with releases from Capaldi, Bieber and Blossoms.

Billie Eilish was already on track for a No.1 single – her first in the UK – with Bond theme No Time To Die. But the televised performance at The O2 alongside Hans Zimmer and an orchestra helped the single race to No.1 with sales of 90,488. Eilish won the International Female Solo artist award.

Polydor co-president Tom March said: “It’s been the most incredible journey for Billie Eilish – you turn another corner and something else incredible happens. From the Grammy night, which was brilliant, to the Oscars performance and the reaction to the Bond song and then going straight to No.1 – [No Time To Die] broke the record for the most streams by a female artist on its first day, 1.2 million streams in the UK. Her performance was magical, watching her and Hans Zimmer on that stage was just mind-blowing. We loved it and she loved the BRITs experience.”

Eilish has also passed a billion streams in the UK. At 18, she’s one of the youngest artists to hit the streaming milestone joining acts including Ariana Grande, Ed Sheeran, Justin Bieber and Drake. She’s also the youngest artist and the first female to take a Bond theme to the top of the Official Singles Chart.

“What a fantastic achievement this is for Billie Eilish, to set new standards for a brand new Bond track and break through through the one billion barrier for audio streams in the UK,” said Official Charts chief executive Martin Talbot.

Harry Styles only climbed one place to No.8 (6,849 sales) but experienced a week-on-week increase of 29.3% for Fine Line (Columbia)

Following her BRITs medley and banter with host Jack Whitehall, Lizzo’s Cuz I Love You climbs to a new peak of No.35 with 2,393 sales, up 113.7% week-on-week.

In the singles chart, Celeste climbed 56-47 with Stop This Flame (Polydor). The BRITs Rising Star winner performed Strange at the ceremony.