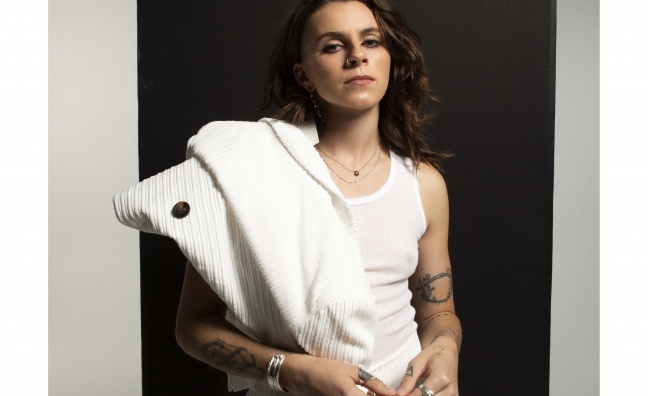 Lynn Gunn has been waiting for today – the release date for her band Pvris’ third album, Use Me – for a very long time.

The album was originally due out in May. But it was pushed back first because of the coronavirus crisis, then because Gunn didn’t want to distract from the burgeoning Black Lives Matter movement.

Before the album was made, Gunn had had to battle a raft of health problems that had almost incapacitated her by the end of the tour for second record All We Know Of Heaven, All We Need Of Hell. The band also made key changes to its team, including moving to major label Warner Records after previously being on Rise/BMG, while Gunn made the decision to step up and take ownership of the project, rather than carry on the pretence that the music is an equal partnership with bandmates Alex Babinski and Brian Macdonald. The full story of why is in the new issue of Music Week, available now.

Even since our interview with Gunn, Babinski was ejected from the band after accusations of sexual misconduct, which he denies. A band statement on social media said: “As of today, Alex will no longer be associated with Pvris. He will be handling these matters privately and professionally.”

Babinski’s own statement says he “will be taking legal action in order to professionally and efficiently clear my name”.

Despite such issues, the brilliant Use Me stands as Gunn’s best work to date and an album that Warner believes can become a rare alternative rock crossover hit. So here's Gunn on coronavirus, more new music and why she’s not about to join the livestreaming revolution…

This must be a strange time to be releasing a new album...
“Yeah, regardless of a global pandemic happening, it’s definitely a weird time to be releasing new records. People are creating content that’s extremely different and people are consuming it very differently. It’s the Wild Wild West right now and anything goes, no one really knows what works and what doesn’t, you have to throw all caution to the wind and hope people connect to it. It’s frustrating, but we’re doing the best we can given the circumstances and we’re trying to find different ways to keep our core fans engaged and excited. If anything, the best time for that is now – everybody’s at home just waiting for something new to happen, so I’m hoping that adds to the excitement of the album.”

It does seem like a record suited to isolation…
“Yeah. Making the album was a very singular, lonely process. I was travelling round everywhere writing with new people and going back and forth until tracks were finished. For me personally, it was a kind of lonely and reflective solo endeavour. But there are also more energetic, more expansive songs as well.”

How is it being on a major after spending your entire career on smaller labels?
“I definitely think there’s more cooks in the kitchen, but everybody that’s working our project is really passionate about it and that’s all you can ask for at the end of the day. We’re making it work and everybody’s been great so far. We’re just excited to get the album out. We haven’t experienced control issues or creative conflict, for the most part it’s been symbiotic, understanding and supportive. There’s healthy pushback like, ‘Who knows, maybe we can get a better song here or push this a little bit more?’; but I always want that anyway, whatever label we’re on. I definitely want to feel challenged and pushed and it’s the right amount of that.”

Were you tempted to add to the album during lockdown?
“We weren’t able to add any new songs unfortunately, that was something I really wanted to try and do. But we managed to get a really great feature with 070 Shake on Use Me that I’m extremely excited for, because I’m a huge fan of the artist. And new music is being worked on at the moment and hopefully that can be heard shortly after the album. It’s sounding pretty cool. I think I know the meat and the bones of what’s going to be happening sonically. Although that could all change by the time it comes out! I never want to pigeonhole our sound, I want to leave it pretty open. But I have the general idea of the concepts, sonic and visual, and I’m excited to explore it more.”

Will you be doing any livestream concerts?
“I’m not sure. I’m definitely still torn on it. I have never been a fan of livestream performances, even when we could actually play live in person with people in the audience. I just don’t think they capture a show, so it’s tricky. I’m all for authentic, in-person connection and you can’t replicate that through computers.”