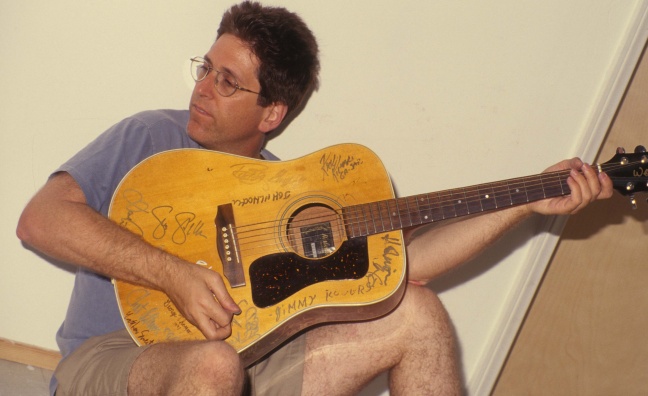 By his own admission, Jack Sherman did not have the easiest time in the Red Hot Chili Peppers.

But the brilliant former Chili Peppers guitarist, who sadly passed away last week, still made an important – if not always acknowledged – contribution to shaping the sound of a band who went on to become one of the biggest rock acts in the world.

Sherman replaced original guitarist Hillel Slovak in the band in 1983 and his influence is all over the band’s debut, self-titled album. Like Slovak, Sherman helped bring the funk to the band’s hard rock style, elevating the band above the pack of mid-‘80s LA rockers and helping producer Andy Gill create the album’s tight funk sound.

Sherman played on the band’s tour to promote the album and got as far as co-writing nine tracks on the 1985 follow-up, Freaky Styley, although he never played on the record.

That's because Slovak decided to quit his other band, What Is This?, and asked to rejoin, meaning Sherman was unceremoniously ejected from the act he’d helped to establish as a serious proposition (the Freaky Styley reissue sleevenotes saw bassist Flea matter-of-factly state that he and frontman Anthony Kiedis “gave the Shermdog the axe”). But in truth, the (relatively) quiet, “straight man” guitarist was always an uneasy fit with the raucous Chili Peppers, however mercurial his talents as a guitar player. At the height of the Chilis’ on-the-road carnage, Sherman took to taping off his area of the stage in a vain attempt to keep his whirling dervish bandmates from messing with his set-up.

The split wouldn’t be the last time he felt like he’d been treated badly by his bandmates – Sherman was not included when the band was inducted into the Rock And Roll Hall Of Fame in 2012. By then a seasoned session musician, Sherman blamed the band – another former guitarist, Dave Navarro, also missed out – but in truth he was more likely a victim of the Hall’s rules and regulations.

Prior to that, Sherman had been sufficiently reconciled with the band to contribute backing vocals to their 1989 mainstream breakthrough, Mother’s Milk. Sherman no doubt would have noted the irony that that album has sold 137,896 copies in the UK across two editions, according to the Official Charts Company (and over half a million in the US), whereas The Red Hot Chili Peppers has only moved 54,324, and Freaky Styley 74,733.

Then again, the guitarist’s role in the band has always been relatively interchangeable – after Slovak passed away in 1988, the likes of Navarro, DeWayne McKnight, Josh Klinghoffer and John Frusciante have all filled the position with varying degrees of success and longevity. Many of those may be better remembered for their RHCP service than Sherman, but few could match the focus he brought to bear during the band’s formative years.

That debt was at least acknowledged in Kiedis’ autobiography, Scar Tissue, where he said: “God bless Jack, he did keep the band afloat for a year and if he hadn’t, the years to follow probably wouldn’t have. As awkward and combative and ornery as our relationship was with him, it was an important one.”

The band also paid fulsome tribute to Sherman on his passing, hailing him as “a unique dude” on social media. “We thank him for all times good, bad and in between,” they said.

We of the RHCP family would like to wish Jack Sherman smooth sailing into the worlds beyond, for he has passed. Jack played on our debut album as well as our first tour of the USA. pic.twitter.com/2vpZ3wrYRN

He was a unique dude and we thank him for all times good, bad and in between. Peace on the boogie platform.

Sherman may have put up with rather more of the latter than the former in his most famous role. But his legacy remains an enduring one, whether most people realise it or not.