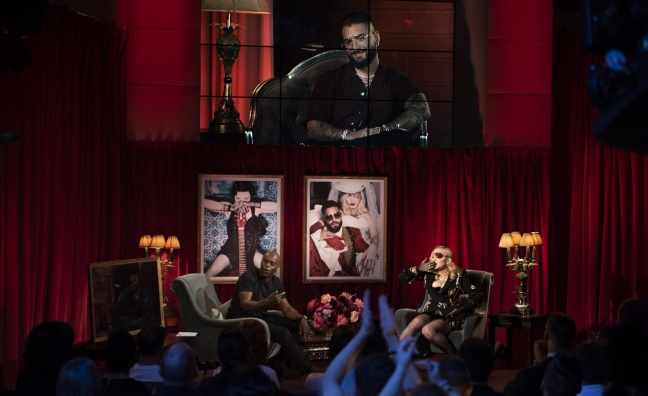 Madonna unveiled the world premiere of her video of her new single Medellín during a globally televised MTV music event last night.

The pop icon, who releases her 14th studio LP Madame X via Interscope on June 14, was interviewed by DJ Trevor Nelson and fans live from MTV's Camden HQ.

Madonna said her relocation to Lisbon, Portugal, had ultimately inspired the new album, her first since 2015's Rebel Heart.

"I didn't go to Lisbon to make a record, that was the last thing on my mind," she said. "I went to Lisbon because my son wants to be a professional soccer player and he was never going to have the highest level of training in America so I just kind of spun the globe in a way and did a lot of research and found my Top 5 academies for boys to train and Lisbon ended up being my favourite city of the options.

"I thought it was going to be super fun and adventurous but then I found myself just going to school and picking up kids and going to soccer matches and really being 'Neddy no-mates'. So I started to meet people and most of the people I met were artists – either painters or musicians – and I started getting invited to people's homes and they had things called Living Room Sessions. Everyone would come, sit around a table and then suddenly musicians would start getting up and playing instruments.

“Basically, I moved to Lisbon to be a soccer mom, and that’s where Madame X was born.”

She continued: "Lisbon is a melting pot of cultures, musically... I had the pleasure and honour to meet musicians from all of these places and be inspired by their music and then let it influence me and that's how all these songs came to be.

"We really are connected through music, I would say, more than anything. We were connected before Instagram, people."

"It was amazing," she said. "I hadn't worked with him probably in about seven years and so I wasn't sure whether he was going to like the direction that I wanted to go in... I'm very inspired by his intelligence and hopefully vice-versa."

Madonna's Medellín collaborator Maluma briefly joined the conversation live from Miami, while she also took questions via satellite from MTV’s Sway Calloway and fans in New York, with additional MTV-hosted events in Milan and São Paulo.

"So I wanted to be able to go back to that time in my life when I was just starting out in New York and I didn’t care what people thought and my music really came without listening to all the noise and recommendations or suggestions, or whatever. And that is also the time in my life, when I was 19, when I was given the name Madame X, so the whole story comes full circle.”