'They're one of the biggest bands in the world': Island bosses dissect U2's new album campaign 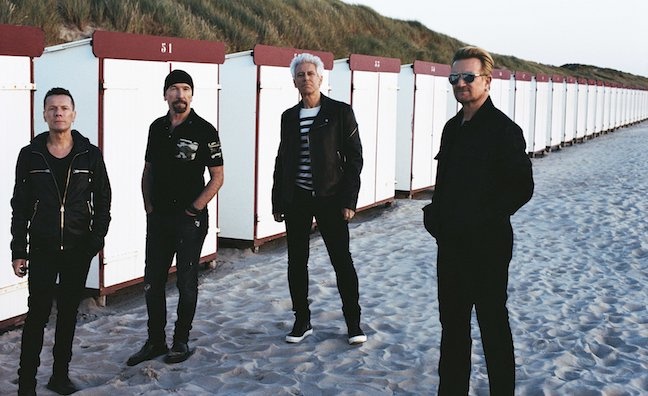 Island Records MD Jon Turner has described U2 as “the backbone to the label”, in a new interview that dissects the campaign for new album Songs Of Experience.

Turner, joined by label president Darcus Beese and Maverick’s Guy Oseary, who manages the band, was talking to Music Week ahead of the record’s release.

Revered by hordes of fans around the world, the Irish veterans are set to chart today with their 14th album, which is battling for top spot with Sam Smith and Ed Sheeran. Inside our latest issue, Beese, Turner and Oseary give the inside story of a campaign they’ve been hard at work on for the past 18 months.

Shooting from the hip, Beese outlined the aims of the campaign. “Even with the new landscape of streaming, U2 are our premier global rock band,” said Beese. “While you’ve got to take into consideration the change in the marketplace, I’d still expect the band to do very well. No.1 is always the target with a band like U2.”

He noted the “military” operation of the international campaign, while Turner described U2 as a “truly global act” with a reach into South America, Eastern Europe, Australia and Asia.

Fans’ first taste of the new album, The Blackout, premiered on Facebook Live, part of a strategy to mobilise U2’s audience on social media.

“They have got a huge audience on Facebook,” Turner told Music Week. “The band are very keen to share music with their core audience who have been supporting them over the summer on the Joshua Tree tour. We wanted it ultimately to be a ‘fan first’ campaign.”

Oseary underlined this commitment to social media strategy: “We were committed to sharing new music with the fans first. The best way to ensure that is via our socials: Our fanclub, Facebook and Instagram. In this case, Facebook Live was the perfect launch partner.”

The Blackout received more than two million views in its opening 24 hours and over 11 million in little over a week.

Also cornerstones of the campaign are U2’s international partnerships with streaming platforms such as Amazon, Spotify and Apple. On Amazon Music, The U2 Experience is geared towards voice activation and gives fans access to both old and new content, while Apple Music subscribers get an eight-minute film with album liner notes narrated by frontman Bono. Spotify features interviews with Bono and The Edge and a Spotify Singles session.

Perhaps just as important as chart placing is U2 cementing their place on streaming platforms. “By the end of this campaign, I hope U2 are in the streaming ecosystem where young people are not only discovering this album but also the long, rich legacy and catalogue of U2,” Beese added.

Other cornerstones of the campaign have included a triumphant show in Trafalgar Square and a victorious evening at the MTV EMAs, with a BBC special to come later this month.