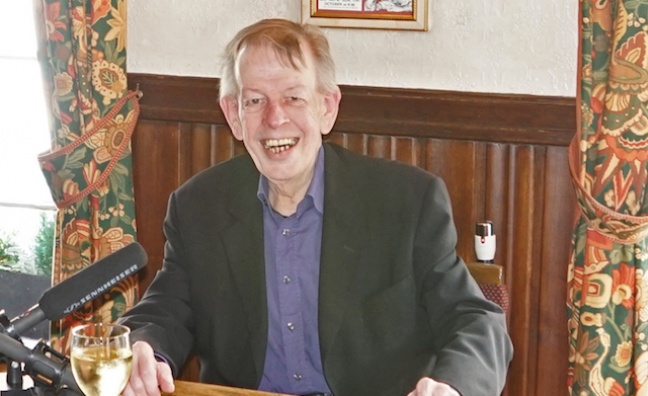 Cliff White, one of the UK's leading journalistic authorities on soul music and a Grammy winner for his work on James Brown's Star Time box set, died on 25 January at the age of 72. He had been at Newham Hospital in London; cause of death is not yet known.

White had been a widely respected commentator on R&B for decades, initially as a freelance correspondent for the New Musical Express, Black Music and other titles. He went on to work for Charly, Demon and Proper Records, and won a Grammy in 1992 for the 4-CD Brown retrospective on PolyGram, for which he wrote the sleeve notes with Harry Weinger, Nelson George, Alan Leeds and Brown himself. White had the ear of the Godfather of Soul himself in the '70s and '80s, gaining his trust over the course of many interviews.

Leeds, who as Brown's former road manager had a similarly close relationship with the soul and funk pioneer, wrote on Facebook after White's death: “I met Cliff in 1974 and introduced him to JB, who took to him right away, allowing him backstage access for years to come. In fact, Cliff was pretty much part of the JB posse whenever they were in England.”

Weinger, his collaborator on Star Timeand now VP, A&R/Product Development for Universal Music Group, told Music Week: “Cliff White was a soul mate. At the time we met, by telephone and long letters by Royal Mail circa late 1980s, we were collaborating on a few James Brown reissues while finding our way towards a definitive James Brown box set.

“That quest, with help from many others, became the four-CD collection Star Time. Though we were hardly peers — his prose outranked mine in every respect — Cliff agreed to co-write, with me, the set's main essay, which should be enough proof of his grace and generosity. And we won a Grammy Award for them together. Cliff was serious about his craft, but he knew there was joy and magic in the music we loved.”

Born in 1945, White left school for an accounting job with a City of London stockbroker. His first music role was in 1964, as salesman at the original HMV store in London's Oxford Street. He sang for a time in a UK beat group, but after some years working outside the music business, found his vocation as an enthusiastic, authoritative writer on his beloved subject, soul music. He wrote regularly during the 1970s for Black Music and the NME, and in later years for Black Echoes, Let It Rock and Smash Hits.

White was product manager for Charly from 1979-89, and after a short spell with Demon, served from 1992 until 2003 in the research division of the MCPS-PRS Alliance, now PRS For Music. His unrivalled knowledge kept him in demand as a reissue consultant, notably for PolyGram and then Universal's reissues of Brown's catalogue, and he was a label manager for Proper Music Distribution from 2003-08.

In a 2014 interview with the roots music magazine Tales From The Woods, White reminisced with Keith Woods about his early days as a freelance print journalist. “It was just a magic time for me,” he said. “It was always hand to mouth financially but I got to meet so many of the artists I wanted to meet, I got to talk to them and get on a friendly basis with many of them.

“At root I was most fascinated to explore the music that I had grown up loving and grown older enjoying - US rock 'n' roll, blues, R&B, soul into funk and some forms of disco and to see the artists perform live and, when possible or convenient, to meet them and interview them about their careers. That was the principal motivation.”