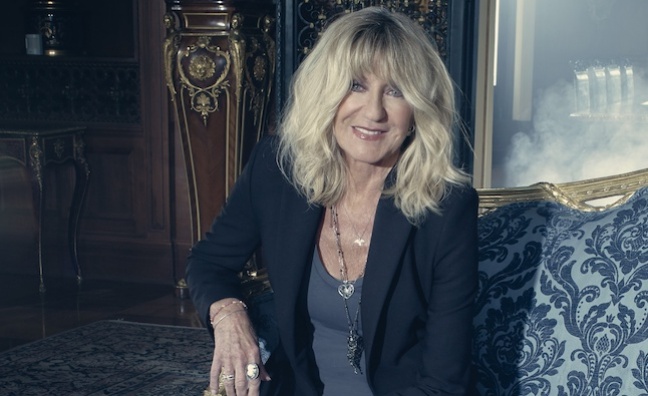 Warner Music and Hipgnosis have paid tribute to Fleetwood Mac’s Christine McVie, who has died aged 79.

McVie was the songwriter for the band’s evergreen 1977 song Don’t Stop from the Rumours album, as well as Songbird and, as co-writer, Little Lies, among others.

The UK singer-songwriter died peacefully in hospital, according to a family statement. Their statement said "we would like everyone to keep Christine in their hearts and remember the life of an incredible human being, and revered musician who was loved universally".

McVie joined Fleetwood Mac as a singer and keyboardist in 1970, and was a key member of the band for more than 25 years. She later re-joined the group in 2014 after making an appearance with them at The O2 in the year before.

Christine McVie was one of eight members of Fleetwood Mac inducted into the Rock 'n' Roll Hall of Fame in 1998. In 2014, she received the Ivor Novello Award for Lifetime Achievement.

Fleetwood Mac are one of the biggest catalogue acts with 22 million monthly listeners on Spotify.

Max Lousada, CEO, Recorded Music, Warner Music Group, said: “The loss of Christine McVie is not only devastating to all of us in her Warner Music family across the globe, but to the entire music community and her countless millions of fans. From her early days with Chicken Shack to her phenomenal time with Fleetwood Mac to her brilliant solo work, Christine has been in our collective musical consciousness for nearly six decades. Her voice was unmistakable and indelible, her songwriting beautiful and peerless, and her live performances powerful and entrancing. She was, and is, a musical icon for the ages, and she will be deeply missed. Our condolences go out to her family, friends, and bandmates.”

Kevin Gore, president of global catalogue, Recorded Music for Warner Music Group, said: “The Warner family has lost a dear friend of many decades with the passing of Christine McVie. An exceptionally gifted musician, her signature vocals and impeccable songwriting are front and centre on many of Fleetwood Mac’s most beloved hits as well as her string of beautiful solo albums. I had the honour of spending time with Christine a few years ago to discuss how to best present her solo work, and I’m so pleased with the collection she produced, which recently earned a Grammy nomination. Our deepest condolences go out to Christine’s family, bandmates, and friends, along with her legions of fans around the world. Warner Music will continue to honour and preserve Christine’s unparalleled legacy and, though she may no longer be with us, we will all, like the songbird, keep singing her songs.”

Merck Mercuriadis, chief executive and founder of Hipgnosis Song Management, which acquired McVie’s songwriting catalogue last year, said: “Christine McVie was our songbird. Arguably the UK’s greatest female songwriter as well as the most successful. Her songs moved tens of millions of people all over the world. Her songs will live on forever and we will never forget her.  It’s one of Hipgnosis’ greatest privileges to be associated with her.”

Further tributes are below.

So so sad to hear about Christine McVie an artist I held dear and close to my heart. One of the greatest all time songwriters, singers, and band members, she radiated both purity and sass in equal measure, bringing light to the music of the 70s. RIP. - John pic.twitter.com/MkGqAD1wRV

I am so sad to hear of Christine McVie going on to heaven. The world feels weird without her here. What a legend and an icon and an amazing human being. RIP https://t.co/nr6nfZ8rTM

Christine McVie had the most hits of anyone in Fleetwood Mac, yet was somehow the most underrated member. Never flashy, alway great. She was the glue that held all those crazy wonderful elements together. Her songs had a soulfulness unhampered by pretense. RIP.