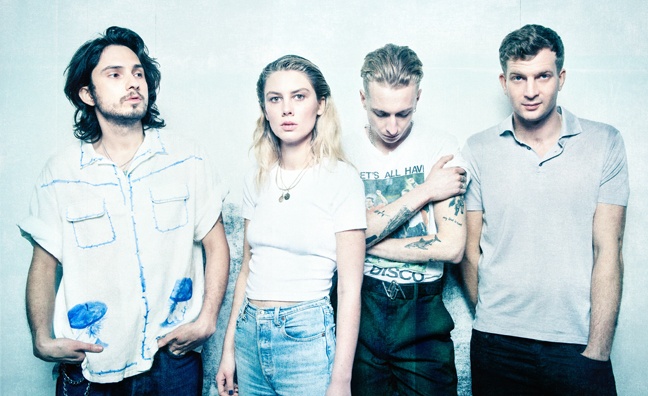 Wolf Alice could be on their way to their first No.1 albums chart finish this week, and the band have told Music Week that the campaign for Blue Weekend stands to be their finest yet.

Launching the campaign in a May interview with Music Week alongside label boss Jamie Oborne and manager Stephen Taverner, the group spoke about the importance of touring in the evolving landscape for UK rock acts.

“We’ve always wanted to go to places that are a little bit more off the beaten track,” said bassist Theo Ellis of the group’s plans for an extensive UK & Ireland tour in January next year. “For people who can’t access certain gigs, it would be nice to go and play some weird places around the UK.”

“It would be nice to play some independent venues, because fuck knows they could do with some help,” Ellis added. “They were in pretty dire straits before coronavirus... And then we’ll probably just tour ourselves into the ground until we have no soul left.”

“It’s so hard, because there are so many places to go!” said singer and guitarist Ellie Rowsell. “It’s nice to go off the beaten track. But then if you do that, you’ve got to play more shows, and will that take away from the shows that you’re playing? No amount of time off is going to find a really great solution – unless you’ve got tons of money.”

Drummer Joel Amey reflected on the different challenges facing emerging bands today, compared to when Wolf Alice were starting out.

It would be nice to play some independent venues, because fuck knows they could do with some help

“It’s probably quite different starting today,” he said. “There are some things that are always going to be the same. But TikTok and stuff like that, it’s taking over quite a bit, isn’t it?”

Guitarist Joff Oddie said that, although the landscape is much-changed for new bands, the basics remain the same. “If you are serious about being a band, the fundamentals don’t really change that much,” he said. “It’s about writing loads of songs. It’s about getting good at your instrument. It’s about playing live, practising.”

Amey added: “If you said to YouTubers or TikTokers, ‘Would you want to go out for a month in a van? Be playing to two people? And sleep on the floor in the same room as six other people? Do you want to do that? Or do you want to make a video at home that gets 20 million views?’ I know what I’d prefer.”

Ellis said that the surge in streaming and technology has a significant role to play in the success of new rock acts.

“I have definitely noticed that the ‘genreless’ notion feels more applicable to newer bands, probably because of social media and playlist culture and that magpie thing, which we love,” he said. “I think we were caught between generations, where a lot of the questions when we were coming up were, ‘Who do you want to sound like?’ and now that’s shifted to, ‘What inspires you?’ and that can be such an array of things.”

Blue Weekend was produced by Markus Dravs and has drawn positive reviews across the board. Rowsell said it represents the group’s best work yet.

“You get a certain way up the hill and you don’t want to go back down again,” said the singer. “That fear can mess with your head. But we got to a point with this album, where it just felt good. We went over everything with a fine-tooth comb, which I was really grateful to be able to do because when something’s really important to you, you don’t want to rush it.”

Wolf Alice emphasised the strength of their bond with Dirty Hit and Taverner’s East City Management, explaining that it allows them a crucial level of creative freedom.

“The label knew the importance of this record, for a number of reasons, so they told us: ‘Don’t rush it because you won’t ever get to redo it,’” said Rowsell. “That felt important because it had been quite a long time since we last put out music and we were thinking, ‘Oh God, has it been too long?’”

Read more from Oborne and Taverner later this week on musicweek.com. Subscribers can read the full interview with Wolf Alice from the May edition of Music Week here.