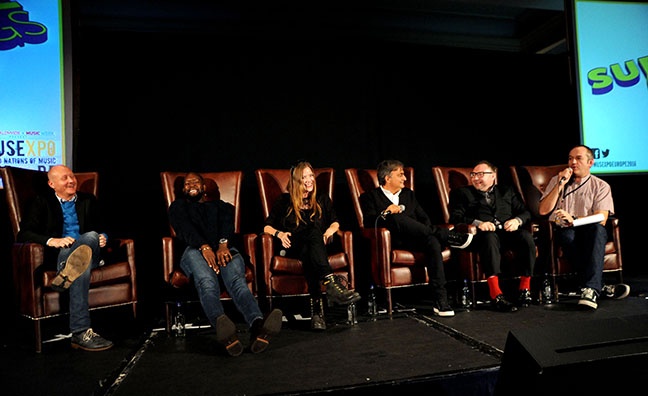 You know exactly what you’re getting with MUSEXPO. The Los Angeles-based conference and showcase event, founded by A&R Worldwide’s Sat Bisla, is now in its 13th edition and comes with certain guarantees: top execs, heated debates and – of particular interest for any Brits heading west – some LA sunshine.

This year’s conference kicks off on Sunday (April 30) at the W Hotel in Hollywood and runs until May 3. Music Week will be there to cover it, so if you’re stuck in rainy old Britain, do stay tuned to our Twitter feed and musicweek.com for the latest updates.

In the meantime, here are just a few of the potential highlights from the event, hand-picked from this year’s action-packed schedule…

The Republic Records co-founders and chief executives will be honoured at the May 3 ceremony by Sir Lucian Grainge, no less, while their keynote interview the day before should provide plenty of insight into how they grew Republic from a fledgling indie record company into one of America’s biggest labels. Republic is the label that signed James Bay, of course, so they might even know where he gets his hats.

MUSEXPO’s Global Keynote panel always attracts a heavyweight line-up – and this year is no exception. This week’s Music Week cover star, Island Records president and CEO David Massey, will be there on May 1, alongside others including Universal Music Group’s Andrew Kronfeld, BMG’s Zach Katz, Live Nation’s Ron Bension and Saavn’s Paramdeep Singh.

Showcases at previous editions of MUSEXPO have helped bring the likes of Katy Perry, The Temper Trap and Jessie J to stardom, so who knows which breakthrough acts of the future will be lurking in this year’s showcase schedule? Said showcases are also accompanied by wine-tasting and cocktails which always helps, we find.

Music Week won’t be the only ones getting freaked out by that big yellow thing in the sky that always seems to illuminate MUSEXPO in particular and California in general. Because dotted around the panel programme are all sorts of leading UK execs, including Radio 1/1Xtra’s Chris Price and Ben Cooper, the BPI’s Ged Doherty (there to talk about his other role as founding partner of Raindog Films), X-ray Touring’s Steve Strange and Radio X’s Mike Walsh.

Hopefully, they’ll be serving tea for us all during the breaks so we can have a nice moan about the weather.

MUSEXPO generally has longer panels than most conferences nowadays, allowing execs to go deep on their specialist subjects. This year there will be panels highlighting A&R, branding, the live business, digital and management.

Even the most inward-looking US exec knows it’s a big world out there nowadays, and MUSEXPO will be bringing some of it a bit closer this year. Specifically, India: one of the emerging global markets for music with the most potential.

Leading execs from the sub-continent will be providing essential insights into a market that’s likely to prove key to the biz in the future.

This fact may have flown under your radar but, apparently, Hollywood is quite big on the movie business. This means there’s a chance you’ll run into Winona Ryder at a taco stand, but also means MUSEXPO can bring you the inside track on where films and music intersect.

In its Meet The Film Producers & Creatives panel, the likes of legendary music supervisor Alexandra Patsavas, big-hitting producer Sunil Perkash and even actor Alan Ritchson – the man who starred as Raphael in the Teenage Mutant Ninja Turtles reboot – will be acting as our Hollywood insiders to shed light on how motion pictures can break your acts.

We don’t get the chance to say this very often in Music Week, but here goes: Cowabunga, dudes.