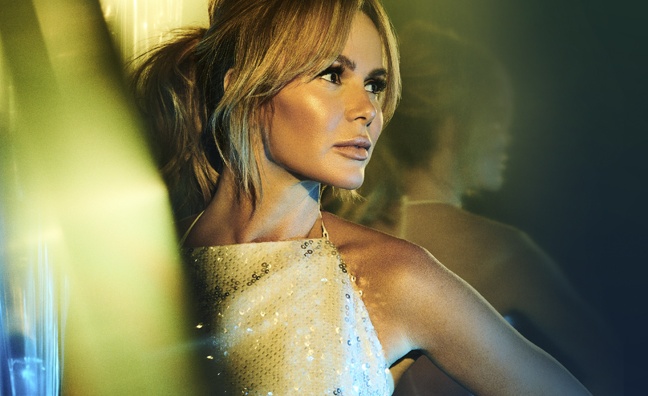 Following Amanda Holden's appearance on BBC One's Musicals: The Greatest Show on Sunday night, here's a chance to revisit our interview from December.

Talent show judge. Radio host. West End star. Actress. Viral sensation. Now Amanda Holden can add best-selling artist to that impressive list. As her debut LP Songs From My Heart continues to light up Q4, she dissects social media, signing to EMI and her belated entry into the music business...

While the rest of the world was losing its collective mind, Amanda Holden retreated to her happy place.

“I’ve done quite crazy, mad things all year,” she confides to Music Week. “Like mowing the lawn in my wedding dress, putting the bins out in my ball gown, making up silly dance routines, cooking and turning our camper van into a restaurant.”

Yep, since lockdown 1.0, the Britain’s Got Talent judge has become a proud inhabitant of planet TikTok. Holden’s zany short-form adventures have earned her a seven-figure following on the platform, with a viral clip of her dunking her daughters’ faces in flour (all in good fun, of course) being viewed more than 12 million times.

The 49-year-old has her former Heart Radio colleague Ashley Roberts to thank for the discovery. “She said, ‘Oh Mandy, there’s this new thing, you’ve got to do it’,” recalls Holden, affectionately mimicking the Pussycat Dolls star’s American accent. “And I was a bit like, ‘Oh, flipping heck, I’ve already got Instagram and Twitter!’ But then I thought, ‘This is me’, because it was funny and not bitchy – well, not that I’ve seen – and it seemed a much more light-hearted way to pass a few hours without judgement.

“What I loved about it was that I felt like I got to know all these like-minded, nutty people who were also drinking rosé at one o’clock in the afternoon. It’s a community with a good sense of humour and God knows, that is something we need in the world at the moment.”

Together with her other social media accounts, TikTok offered an invaluable route to market for Holden’s first solo record Songs From My Heart, which peaked at No.4 upon its release in early October. A covers album, the LP features timeless classics such as I Dreamed A Dream, Don’t Cry For Me Argentina and the Sheridan Smith duet I Know Him So Well, in addition to the NHS charity single Over The Rainbow.

“I’m a huge musical theatre fan, and anything that tugs at heartstrings and reminds me of my family was always going to be on there,” says Holden. “It was a bit like starring in my own Desert Island Discs – it pretty much reflects my life so far.

“I made it with my husband, Chris [Hughes, YMU director], and it was an absolute labour of love. It’s something we’ve always wanted to do and we were control freaks. We A&R-ed it, we changed orchestration and were left to our own devices, with no interference, which was fantastic of the label.”

With sales of 25,764 (OCC), the record is this year’s highest-charting and biggest-selling debut release by a UK female artist.

“I said to Chris, if we get into the Top 40, I’ll feel like it’s done well. But everything else has been a total bonus and I’ve been absolutely thrilled to bits and flattered,” beams Holden. “I like to focus on the positives and the great thing about this year is that sense of community and war spirit from us all looking out for each other and being on an even playing field. When this kind of music comes out, it’s heartwarming and it’s for everyone. It’s sentimental and it brings back memories, and I think everyone was in the right mood for that vibe. That’s probably why Kylie’s done so well at the end of the year – because she brought the perfect album out – two old ladies in the charts!”

Portsmouth-born Holden is in stellar company alongside Minogue, Dua Lipa and Lady Gaga as the only female solo acts to spend two consecutive weeks in the albums Top 10 in 2020. “It’s surreal,” she grins. “Dua Lipa has come on to Heart Breakfast a lot and there was a point where I overtook her in the charts and I felt embarrassed!

“We never discuss it when they come on now. I can’t say, ‘Oh, I overtook you!’ I know they know, we just don’t say it. So it’s surreal and brilliant!”

The Olivier Award-nominated West End star sparked a bidding war for her services after recording The Greatest Showman track Tightrope with her daughters for her husband to mark their 10th wedding anniversary in 2018. Holden speaks fondly of former Virgin EMI boss Ted Cockle, who persuaded her to sign with the Universal UK flagship. Cockle has since moved on to Hipgnosis Songs, with Rebecca Allen taking the reins at the rebranded EMI Records, but Holden remains grateful for his overtures.

“I’ll be honest, it was an unusual label to want to sign this type of music,” she acknowledges. “And it was [Cockle] really, he was very funny. We’re both quite straight talkers, quite sarcastic, sardonic people – as is my husband – and we all just got on. He loved the ideas I came up with and it’s down to him being brave enough to do it. I know it’s not the lane he’s known for, but it paid off and I think he’s secretly quite smug!”

The marketing campaign was led by ex-Capitol Records boss Murray Rose’s Emerging Behaviour agency, which launched over the summer.

“Amanda is very aware of her audience and has made an album that has resonated strongly with her fanbase,” says Rose. “She wanted to tell a story with it and these songs are very dear to her heart. It proves that people see her as Amanda Holden, the singer, as well as her many other guises. She started out in musical theatre, it’s part of her DNA and I think the audience has bought into the fact this is something she is doing genuinely.”

As luck would have it, the initial promotional push was only mildly inconvenienced by the pandemic. “Obviously, we live in a world of Zoom now, which everyone has got used to, so from a promo point of view it was fine,” explains Rose. “She had an amazing plot with This Morning, literally every breakfast show and Loose Women, which was brilliant – and she did an amazing performance on Britain’s Got Talent, which drove the concept home.

“She built a massive audience during lockdown on TikTok and has a huge Instagram and Facebook following as well, so we used those channels to tease the music and get across the sentiment of the album.”

Though the vast majority of sales have been physical (86%), sales-equivalent streams of 1,344 (5%) have come as a pleasant surprise.

“It’s scored really well in supermarkets and Amazon, but interestingly the album also did well on streaming services, which shows her broad appeal,” notes Rose. “Younger people obviously watch Britain’s Got Talent and know her socials, so have discovered the album via streaming.”

New single Home For Christmas promises to provide fresh momentum heading in to the festive period.

“For me, it’s about longevity,” suggests Holden, who recently wrapped up filming for the new BBC One’s entertainment series I Can See Your Voice. “I’m hoping the album will drift back into people’s stockings, because it’s the perfect Christmas present.”

While hinting that future live dates could be in the offing (“Two huge promoters have been on the phone”), Holden casts doubt over a potential sophomore LP. Sequels to hit debuts by moonlighting TV stars such as Bradley Walsh and Sheridan Smith have endured diminishing returns in recent times, and Holden is wary of outstaying her welcome.

“Unless you’re Adele, I don’t know how successful a second album would be,” she shrugs. “When I ran the London Marathon, I did it in a really good time. But if I ran it again and didn’t make that same time or beat it, I’d be really pissed off, so there is that to consider. Also, it was unique in the fact that nobody was expecting me to do it; there was that curiosity and the second album wouldn’t have that selling point. So would it be as successful? And how disappointing would it be if it wasn’t?

“There has been talk about it, but I just don’t know. I quite like the idea of riding high on this one and then dropping the mic.”