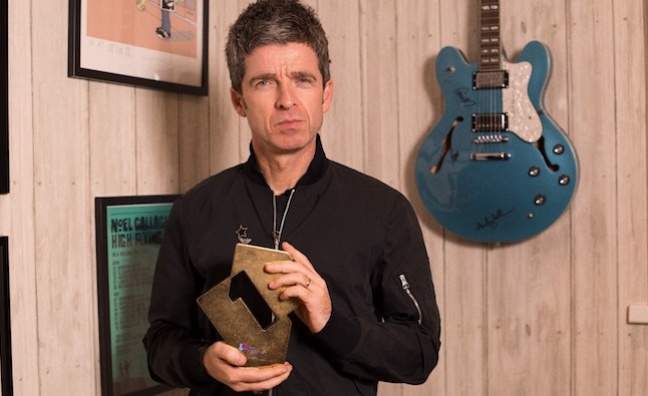 Seven weeks after ‘our kid’ Liam Gallagher scored his first No.1 solo album with As You Were, Noel Gallagher is flying high with his third, Who Built The Moon?

The fraternal feuders shared eight No.1 albums together as members of Oasis between 1994 and 2010 but Noel has had the upper hand since, with his first two albums since the split, issued under the name Noel Gallagher's High Flying Birds, both topping the chart, while Liam's first two albums thereafter, fronting the rest of the band in Beady Eye failed to do so.

The less stellar start made by Who Built The Moon? may be due to the fact it is more poppy and experimental than previous High Flying Birds albums, with production by David Holmes, and the participation of several guests.

Noel, who turned 50 in May, was the sole composer of every track on Who Built The Moon?, as he was on both of the previous High Flying Birds albums, but has taken to talking about the project as a group, although it is noticeable that drummer Jeremy Stacey and keyboards player Mike Rowe, who are most widely regarded as band members, get credits on only eight and two tracks on the album, respectively. That being the case, we'll stick with the definition of the album as a solo effort. Liam and Noel are only the second pair of siblings to enjoy solo No.1 albums, the others being Michael and Janet Jackson.

Who Built The Moon? is the 15th different No.1 album in as many weeks, and its release helped prevent Little Mix's fourth studio album Glory Days from returning to No.1 a year and a week after debuting in that position, following the release of a new Platinum Edition of the set.

Surging 46-3 on sales of 38,576 copies, Glory Days’ expansion sees it adding CNCO collaboration Reggaeton Lento, a trio of new songs and a documentary DVD. It edges past Get Weird to become the Little Mix's biggest-selling album. Its cumulative sales stand at 747,211, with Get Weird – their third album, released in November 2015 – on 745,658 sales.

Joining Ed Sheeran as the act with most albums in the chart are The Royal Philharmonic Orchestra. Christmas With Elvis & The RPO – their third album adding newly constructed recordings to archive vocals from Elvis Presley – rockets 121-6 (29,606 sales) to surpass the No.22 position in which it debuted and previously peaked seven weeks ago following the release of a deluxe edition which increases the track count from 13 to 17. The similarly-styled A Love So Beautiful, on which they embroider and enhance tracks by Roy Orbison moves 7-9 (22,257 sales) on its fourth week in the Top 10, while A Brand New Me – on which they augment classic Atlantic label recordings waxed between 1968 and 1973 by Queen Of Soul, Aretha Franklin – debuts at No.61 (3,116 sales). Brand New Me is 75-year-old Franklin's 13th Top 75 album, while Christmas With Elvis & The RPO becomes Presley's 51st Top 10 album (53rd if reissues are included) – more than any other act.

A year to the week after Dutch violinist, conductor and orchestra leader Andre Rieu's eighth Top 10 album, Falling In Love, he returns with his ninth, Amore (No.7, 27,964 sales), a new collection of music which also features The Johann Strauss Orchestra and is packaged with a DVD featuring a 2009 concert in Sydney. Dubbed the “world’s first classical superstar” and “the king of the waltz”, 68 year old Rieu has now had 17 Top 50 albums – all since the age of 60 – and 30 Top 200 albums.

Housing hits, other highlights of their career thus far and their brand new recording of The Beatles' Golden Slumbers as featured on John Lewis' Christmas TV advert, Elbow's The Best Of debuts at No.11 (17,446 sales). Five of the band's seven studio albums have reached the Top 10, with the last two reaching No.1, most recently Little Fictions, which topped the list in February. Their only previous compilation, Dead In The Boot – a collection of previously released b-sides and bonus tracks – reached No.4 in 2012.

Also securing his second chart album of the year is Daniel O'Donnell whose Christmas With CD/DVD set – recorded with guests in Dublin last December – opens at No.19 (13,218 sales). It is the 55-year-old Irish country/MOR crooner's  36th Top 40 album and 40th Top 75 album. O'Donnell has charted for an unprecedented 30 years in a row since his 1988 debut.

Strictly Come Dancing hoofer Anton Du Beke is the latest TV star to try his hand as a recording artist. The 51-year-old's debut album, From The Top, consisting of tried and tested oldies, debuts at No.21 (10,635 sales), and follows recent chart incursions from the likes of Jason Manford, Bradley Walsh, Shane Richie and Sheridan Smith. Alexander Armstrong made the transition a couple of years ago, and after back-to-back Top 10 albums with A Year Of Songs (No.6, 2015) and Upon A Different Shore (No.8, 2016), the 47-year-old Pointless presenter returns with seasonal selection In A Winter Light (No.26, 7,786 sales). TV stardom is not a recipe that always leads to a Top 75 album, however – Nick Knowles' debut album Every Kind Of People debuted and peaked at a lowly No.92 last month.

She is as experimental and esoteric as ever, but Bjork's ninth internationally-released album – an eponymous 1977 effort was released only in her home country, Iceland – Utopia makes the smallest impact of them all, debuting at No.25 (7,989 sales) for the 52-year-old.

While 2011 X Factor winners Little Mix's Glory Days returns to the Top 10, 2016 winner Matt Terry is having a torrid time with his debut album – with the ill-advised title of Trouble – hitting just that, and making a tepid debut at No.29 (6,443 sales). Of 12 previous winners of The X Factor, dating back to Steve Brookstein in 2004, 11 made the Top 10 with their debut albums, five of them reaching No.1. Terry's immediate predecessor, Louisa Johnson, is the odd one out – nearly two years after she won the competition, her debut album has yet to surface.

Folk/rock singer/songwriter Frank Turner's last two studio albums – Tape Deck Heart and Positive Songs For Negative People – both reached No.2 but new release Songbook is essentially a retrospective, albeit one with one new song (There She Is) and exclusive new versions of 10 previously released songs. It opens at No.36 (5,611 sales).

Bananarama compilation The Greatest Hits Collection spent a week in the chart in May, reaching No.66 after the trio's reunion tour was announced. Now released in a revised and expanded edition ahead of that tour, it re-enters at a new peak, No.50 (4,125 sales). Previously on Rhino, it is, incidentally, now on London Music Stream, becoming the first charted album to acknowledge streaming in its label name – although Bananarama attract a more mature traditional audience hence the very low (121) contribution to sales made by streaming.

Now That's What I Call Music! albums used to be released sparingly, with three regular editions a year, occasional updates to Now! Christmas and carefully targeted supplementary releases once in a while. There's a mass of Now! releases on the market at present, however, with 22 of them in the Top 100 of the compilation chart, including the entire top three. After making the worst start for a regular Now! release for more than 19 years, Now! 98 suffers a further 28.90% diminution in sales to 109,652 copies although it remains at No.1, with the perennial Now That's What I Call Christmas climbing 4-2 (26,856 sales) and the latest Now That's What I Call Country release debuting at No.3 (17,963 sales).