George Michael on the charts 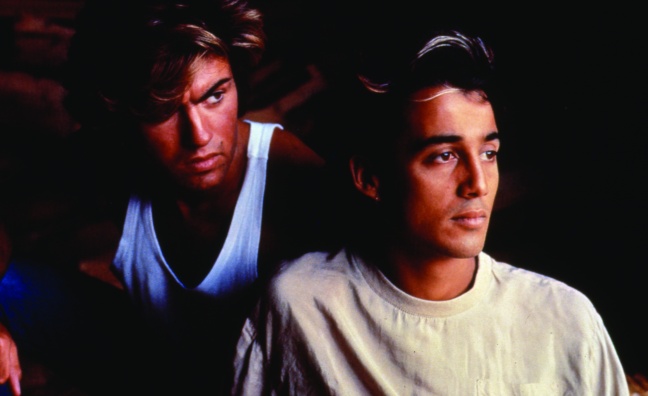 In a year when celebrity deaths were all too common, the sudden demise of George Michael, aged just 53, on Christmas Day still came as a shock and caused an immediate and massive increase in consumption of his work through airplay, streaming and paid-for sales.

It all adds up to a very real display of Britain’s esteem for and love of a complex, but incredibly talented singer-songwriter who was in the public eye for more than 34 years and is one of the 20 most successful recording artists of all-time domestically, with 12 No.1 singles and nine No.1 albums.

Initially paired with school friend Andrew Ridgeley in Wham!, he made his recording debut in June 1982, when Wham Rap! (Enjoy What You Do) was first released.

It received a fair amount of play in commercial club venues, hence its August 1982 No.25 peak on Record Mirror’s Nightclub (ie: Commercial Pop) chart, but stubbornly refused to make the Top 200 sales chart.

Follow-up Young Guns (Go For It) followed in October 1982, although it made a slow start, debuting at No.72, and taking a further four weeks to reach the Top 40, finally jumping 42-28 after filling the opening slot on the November 4, 1982 episode of Top Of The Pops when another act pulled out.

It eventually peaked at No.3, selling more than 400,000 copies and opened the floodgates for the pair, with the reissued Wham! Rap following it into the Top 10 in February 1983, peaking at No.8 and selling 172,000 copies.

Bad Boys (No.2) and Club Tropicana (No.4) also made the Top 10 for the duo in 1983, each selling more than 400,000 copies, and all four singles appeared on their first album Fantastic, which debuted atop the chart that July, spending 20 weeks in the Top 10, and selling upwards of a million copies.

Wham! became involved in a legal dispute with their label Innervision, but it was soon settled, with the band moving to CBS’ Epic.

The carefree Wake Me Up Before You Go-Go saw their career move into overdrive, with the track taking just two weeks to become their first No.1, with sales eventually surpassing 750,000.

Follow-up Careless Whisper was credited to Michael as a solo artist. Breaking their initial run of uptempo tracks, it was a melodic ballad and an instant smash which, to this day, remains Michael’s biggest solo hit, with UK sales alone in excess of 1.5m.

Both songs appeared on Wham!’s second album, Make It Big, which was an even bigger success than Fantastic, selling more than 1.25m copies. It delivered its third and last No.1 single, Freedom - another massive seller, with upwards of 700,000 buyers - in October 1983.

Big as they were, all three were but an appetiser for Wham!’s most enduring and biggest-selling single, which paired the album track Everything She Wants with the previously unreleased Last Christmas.

Although it sold upwards of 500,000 copies the week it was released, it was denied the No.1 slot by the simultaneous issue of Band Aid’s Do They Know It’s Christmas, to which Michael generously contributed vocals. It spent five consecutive weeks at No.2 before tiring, and never did make it to No.1.

Everything She Wants isn’t heard much nowadays but Last Christmas has gone on to become one of the most cherished and hardy Christmas perennials, and since the introduction of downloads, and later streaming, to the chart it has returned to the Top 75 each and every year, and passed the 2m paid-for sales mark a few days before Michael’s death, with streaming adding a further 200,000 to its impressive sales tally.

With Michael keen to explore the more mature sophisticated sound he pioneered with Careless Whisper, Wham! released just two more singles before splitting - I’m Your Man and Edge Of Heaven, both of which added to their tally of No.1s and were included on their 1986 hits collection The Final, alongside another Michael solo No.1, A Different Corner.

Admitting he felt a little vulnerable as a solo artist, Michael’s first release following Wham!’s demise was Aretha Franklin duet I Knew You Were Waiting (For Me), which secured him another No.1.

When he finally went it alone, it was with the controversial I Want Your Sex. Although a radio version substituted the ultimate word of the title with ‘love’, the track’s racy video also caused problems, so it was no surprise that it pulled up short of the chart summit, peaking at No.3.

It was the first track from his debut solo album Faith, which also spawned the No.2 title track, No.11 hit Father Figure and No.8 hit One More Try.

Despite failing to provide a No.1 single, the album itself was another huge success for Michael, topping the chart on debut and selling more than 1.3m copies.

It also marked a huge leap forward globally, especially in America, where I Want Your Sex reached No.2 but all of the other singles reached No.1.

The album spent a modest eight weeks in the UK Top 10 but topped the US chart for 12 weeks and spent 51 weeks in the top tier, securing sales in excess of 10m. Worldwide, it eventually sold more than 26m copies, and remains the biggest selling album in Michael’s canon.

Although Faith was released 29 years ago, Michael was only to release a further four full-length studio albums in his lifetime, with legal disputes and his well-documented personal issues both inhibiting his output.

Listen Without Prejudice Volume 1 appeared in September 1990 and, although generally well-received - almost matching Faith’s sales in the UK, for example - its US sales, although around 2m, were massively below those of Faith, causing Michael to launch a lawsuit against Sony, alleging that they didn’t promote it with enough vigour.

He lost the protracted case, and eventually made his peace with the company, but his US career never hit the same heights again. By 1996, Michael had relocated to Virgin and, now 32, he acknowledged his increasing age by calling his third solo album Older.

Globally, it sold fewer copies than Listen Without Prejudice and its singles success was patchy but, in the UK, it was a massive success, with its first two singles - Jesus To A Child and Fastlove - reaching No.1, Spinning The Wheel and Star People getting to No.2 and the title track to No.3.

Released over a period of 16 months, they helped Older to spend longer in the Top 10 (35 weeks) than any of his other albums, while also racking up sales in excess of 1.8m copies, to become his best-selling studio release in the UK.

Three years after Older, Michael released his one and only covers album, Songs From The Last Century. It wasn’t an album that leant itself to singles, and performed accordingly, becoming his lowest selling album to that point, and doing especially badly in the US, where it peaked at a lowly No.157, although it got to No.2 in the UK and sold over 600,000 copies.

Michael admitted the creative process was becoming more difficult, and there was a gap of nearly eight years between Older and his next - and, sadly, last - album of original material, 2004’s Patience.

It was widely acclaimed as a return to form, generating five Top 40 hits in the UK, including Top 10 entries Freeek!, Amazing and Flawless (Go To The City). The album sold upwards of 700,000 copies.

Two compilations generated huge sales for Michael. 1998’s Ladies & Gentlemen: The Best Of - home to a trio of previously unreleased cuts - was an in-depth revue of his solo career.

It sold a million copies in less than six weeks, racked up eight straight weeks at No.1 and eventually went on to become his biggest selling album in the UK, with sales exceeding 2.5m. 2006 set Twenty Five - marking Michael’s silver anniversary as a recording artist - included both solo and Wham! highlights.

Michael’s final album release, some eight years later, was Symphonica, named after his 2011/2 tour, and featured live symphonic recordings of familiar originals like One More Try and A Different Corner, alongside covers. It sold nearly 50,000 on debut at No.1, and has gone on to sell nearly 200,000.