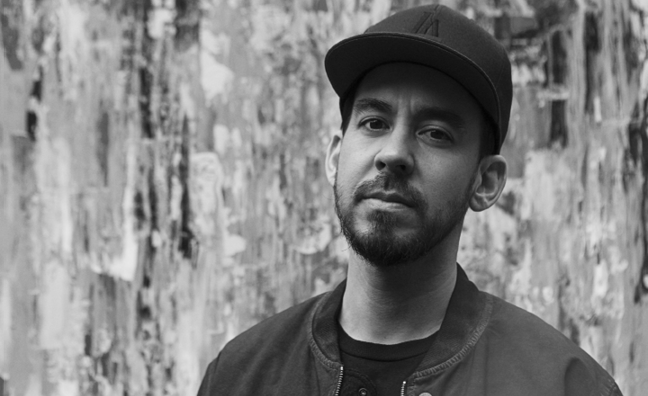 Mike Shinoda’s debut solo record, Post Traumatic, was born out of the tragic death of his Linkin Park bandmate Chester Bennington. But somewhere along the way, the project became about much more than catharsis. Music Week charts his journey out of the darkness

One year ago, everything was rosy in Mike Shinoda’s world.

He was on the road with his band Linkin Park, promoting their new album, One More Light. The more
pop-leaning record had divided Linkin Park’s fanbase, but they were still the biggest rock band in the world, the single Heavy was lighting up charts and the dates they played around the world were as well-received as anything they’d ever done.

“It was going better than we ever expected,” says Shinoda, as Music Week catches up with him at home in Los Angeles.

“It’s always an exciting time, releasing a new record. And then, a short time later, everything just fell apart. Suddenly, I was questioning whether or not I was even going to be able to make music or play on stage anymore…”

The reason for this abrupt turnaround was, of course, the death of Shinoda’s co-frontman and long-time friend, Chester Bennington, for so long the intense yin to Shinoda’s affable yang.

Bennington was found at his home in California, with a coroner later ruling he took his own life.

Shinoda, his bandmates, his management, his record label and his fans were all, naturally, consumed with grief.

But there was also confusion. When you’ve been part of a group of rock titans for nearly 20 years, you get used to your life being mapped out, years in advance. Suddenly, lives were thrown into uncertainty.

“My music and my band have always been enmeshed with my identity,” says Shinoda. “I’ve always thought of myself as a musician and artist, but I’m known as a vocalist and founder of the band. I didn’t know if it would be possible to pull those two things apart; me from Linkin Park.”

First though, there was a healing process to get underway. A tribute concert for Bennington at the Hollywood Bowl on October 27, featuring many of his friends and rock contemporaries, from Blink-182 to Bring Me The Horizon, was booked.

But Shinoda needed more. He needed to document “what was happening in my life as often and as accurately as I could”. And the natural way to do that, of course, was through music.

Shinoda has always been a true artist. He’s always expressed his feelings through art and visuals, and pursued side projects as well as his key contributions to Linkin Park’s massively successful seven-album history (2000 debut Hybrid Theory has sold 1,669,895 copies in the UK alone, according to the OCC).

He’s a believer in art therapy (“It’s no secret that it works, this is just a very intense version of that”) so, as the days and weeks after Bennington’s passing ticked by, the need for catharsis-through-creation grew.

He re-entered the studio with no plans beyond expressing himself. Songs poured out of him, not always good songs, but always ones that helped him make sense of the unprocessed emotions that threatened to engulf him (“Life was difficult, but the songs came easy,” he says, ruefully). It was about release, long before it became about his first record release under his own name.

“It was just cathartic at first,” he says. “I was painting and drawing and making songs regularly, almost every day. After I had made a handful of things, my initial thought was to put them out for free on January 1, because I wanted last year to be over and start the new year off under a new banner…”

Eventually, he says, Warner Bros and Linkin Park’s management “talked me out of it” and he’s glad they did. Because, while January’s three-track Post Traumatic EP captured his grief in its most extreme form, the project has continued to grow from there.

“It was part of his grieving,” says Tom Corson, co-chairman and COO of Warner Bros US. “He was moving through that process, and so was the label.

Everyone at the label was very affected by what happened with Chester, so this was a good healing experience for everybody and continues to be. It really morphed into a wonderful experience for us and a really wonderful album.”

Indeed, perhaps the most surprising thing about Post Traumatic is how enjoyable it is. More of an electronic rap record than a rock one, some of the tracks – most notably Place To Start (with its voicemails from concerned friends of Shinoda’s), Over Again (with its detailed breakdown of the tribute show’s stresses) and About You (with its realisation that people will now think every song is about Bennington, even when it isn’t) – are uncompromisingly, uncomfortably raw.

But there’s also the renewed hope of Crossing A Line, the lightness of Ghosts and even the funny braggadocio of the Chino Moreno/MGK-enhanced Lift Off.

“Life was moving at an erratic pace,” says Shinoda. “Things would feel great one minute and then I would wake up feeling terrible or angry.

Things at one point started to even out and be less tumultuous and those were the times when I started to capture songs like Crossing A Line and Ghosts. The changes in my perspective and the journey, emotionally, mentally, that I took this year made the music.”

Furthermore, Corson says the songs are giving hope to the audience, many of whom are also grieving, having grown up on Linkin Park.

“The subject matter is a little tough at times,” says Corson, who has witnessed the emotion between Shinoda and fans at his first comeback shows. “But, as you listen through the album, it’s definitely a journey he’s taking you on.

They’re all pulling together and the effect that he’s having on his audience and music is certainly welcome, given the circumstances. It’s really been helpful to everyone grieving for Chester and for the band.”

Circumstances mean Warner Bros are approaching the promotional schedule with caution, with Corson summing up their role as “trying to amplify things in the most respectful way”.

“It’s his journey, it’s his lead and we’ll just react to ideas and things that we think might work,” says Corson. “But it’s completely his call. That’s true with many artists in many situations, but this situation more than most.”

Having addressed his grief head on in an early Kerrang! cover story, Shinoda is understandably reluctant to discuss Bennington directly: he first mentions him by name 14 minutes into our chat, although his explanation of the song Ghosts, one of the album highlights, proves revealing.

“Various friends told me stories about visions or dreams that they had that related to me or to Chester,” he sighs.

“I’m not really a believer in all that stuff, but many people were so convinced about the things they had seen or dreamt.

It would be nice, I would love to believe a lot of things that people say – ‘I got a message from him’, that’s basically what they were saying. I’m not saying that that stuff’s wrong but it’s not happened to me.”

Management has issued a ‘FAQ’ briefing to try and save Shinoda from being asked the same, intrusive questions over and over.

But media interest remains strong ahead of the June 15 release, with an in-store scheduled for Amoeba Records in LA on June 14, and tour dates booked in the US, Asia and at Reading & Leeds Festivals.

Corson also reports “good reactions” at streaming, with Crossing A Line, About You, Over Again and Watching As I Fall all clocking up over two million Spotify streams apiece to date (Linkin Park were one of the few rock bands to gain traction on the format).

“Linkin Park’s success should help because that’s where we think the audience is,” says Corson. “The first audience for this record will be the Linkin Park audience and they seem to be finding the record. I think it’ll do well.

I can’t tell you whether it’s going to explode, it’s too early, but we’re working it up the charts and it’s certainly going to find its level in a meaningful way.”

Shinoda remains unconcerned by rock’s struggles on streaming services, but then he himself listens to music in a very streaming-friendly way.

“I don’t listen to music by genre, I listen to music by mood,” he shrugs. “I also love mixed genre music and I don’t even pay attention at this point to the elements that are being combined. I don’t think the whole rock conversation is about whether or not rock is relevant.

The thing I’m more concerned about is young people being enthusiastic about learning instruments. I don’t ever want to see somebody who’s an incredible guitarist or drummer giving it up because their friends only care about the music they’re making on a laptop.

If you’re Grade 8 guitar or drums or saxophone or any physical instrument, that’s an asset to you in the long run.”

And, ultimately, unfortunately, Shinoda has bigger things to worry about right now.

“Regardless of the ‘performance’ of the record, I feel like I’m doing something that is good for people and good for me and those things definitely drive me to keep going,” he says.

“I feel it’s bigger than an album, I’m in the middle of a communal conversation that is bigger than me or the band. I think there will be Linkin Park fans who really enjoy the record. Sonically it’s very different, but it’s still me.

People who have loved the band and who felt a loss when Chester passed away will certainly get something out of this album and it will probably help them through that process.”

No FAQ document will ever be enough to make questions over the future of Linkin Park disappear completely, of course.

The emotional tribute concert helped provide closure, but also reminded people of just what a powerful, important band Linkin Park were, and still could be.

Shinoda himself is on record as saying he’s “unable to say what will happen with the band”. Corson doesn’t know either, but he knows his label must safeguard their legacy.

“It’s quite a responsibility but it’s also an honour to make sure we do right by them,” he says. “That’s a daily conversation and it will be down the line, depending on how they want to re-engage. We’ll see how it goes, but we’re certainly honoured to be part of it.”

Shinoda’s view of the future is similarly open-ended.

“I’m certainly really excited to play the shows and get out in front of the fans out there,” he says, as he prepares for another LA day that will, hopefully, take him another few steps towards resolution.

“The album is the beginning of a journey and I’m excited to see where it all leads.”