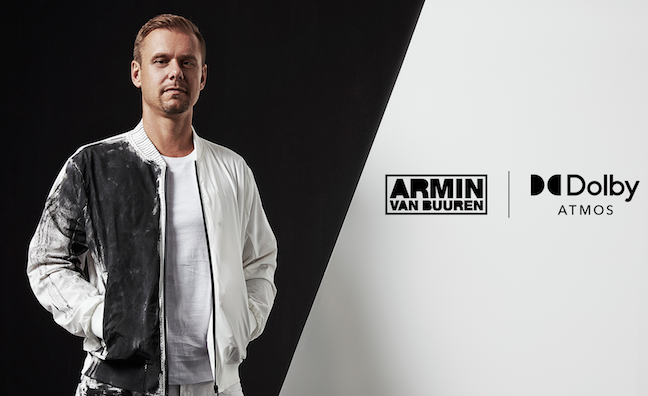 Originally released exactly a year ago via Armada Music, the new Dolby Atmos mix will be available across Tidal’s HiFi tier and Amazon Music HD from October 26.

The immersive sound format from Dolby Laboratories is being embraced by streaming services, labels and artists. Dean St Studios in London’s Soho has installed a Dolby Atmos mix room.

Daniela Bischof, director of marketing at Dolby Europe, said: “Armin van Buuren has redefined what it means to be a DJ many times throughout his incredible career, and this reissue of Balance in Dolby Atmos helps elevate his most recent album to another level. We want listeners to feel like they are experiencing something truly special when they listen in Dolby Atmos at home, and this remixed album brings fans even closer to this global icon’s vision and one of his most exciting pieces of work yet.”

The DJ claims 40 million listeners worldwide for his A State Of Trance radio show in the Netherlands. The show is syndicated to 84 countries and 100 radio stations, as well as streaming on Facebook and YouTube.

“Every song I make teaches me something new, and the next song is always a result of all my previous records, the new things I learned and the people I met,” said Armin van Buuren. “Over the years, this process - and especially the fun of creating - became more and more important to me. This creative journey gives me the energy to do what I do, to keep going. I don’t want to think about what music should be. I want to think about what music could be."

Dolby Atmos Music is an immersive music experience that adds more space, clarity and depth to audio. Dolby Laboratories said it gives the listener the “feeling of being inside the music, as creators are able to strategically place distinctive audio elements into a three-dimensional sound field, offering a fully immersive soundstage”.

The Balance album can be experienced in Dolby Atmos via Amazon Music HD on Echo Studio, on Tidal’s HiFi tier through compatible soundbars, TVs, AVR home cinema systems, or an Android smartphone or tablet.

The availability of music in Dolby Atmos has been increasing with the addition of some major album and single releases, as well as classic catalogue titles.