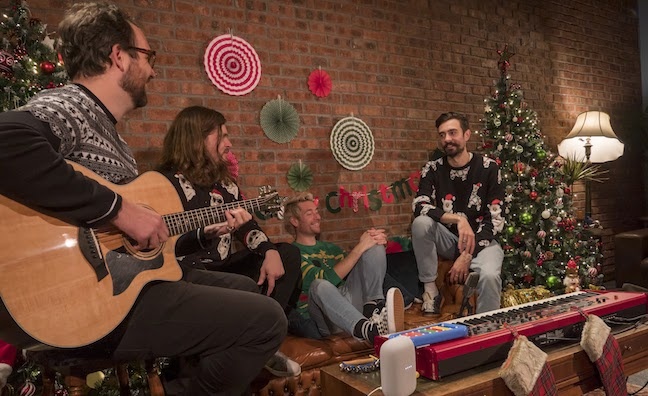 The charts are currently full of festive classics, including new cover versions from Jess Glynne (This Christmas) and Justin Bieber (Rockin’ Around The Christmas Tree).

Bastille are also getting in on the Christmas covers action with a version of Slade’s 1973 single Merry Xmas Everybody for Google Nest Audio Sessions.

How did you decide which Christmas song to cover?

“We thought we’d go very classic. There are so many amazing Christmas songs and No.1s that are so stitched into your consciousness. We went with Merry Xmas Everybody – Slade’s classic – which is good, because it pre-dates all of us. That song is part of the general Christmas mulch that seems to become ever-present and comforting in December of every year. It's always a little bit nerve-wracking taking on songs that are so classic. But, as a band, we’ve always tried to have fun with songs that we love. It was kind of surreal spending a couple of days in November singing Merry Xmas Everybody and deciding who was going to scream throat-ripplingly loud “It’s Christmas!” at the end. But it was really fun. In what's been, for many reasons, a very strange year, it was a really lovely distraction.”

“Because the whole point of this project is that it's intimate, it was about doing it acoustically in a room together. Usually, with our covers, we get quite a lot of production involved, like on the mixtapes that we've done. We did a version of Oh Holy Night [Tuning Out] but made it kind of creepy, like Bon Iver and [sampled] Home Alone. In a lot of the covers that we do, it's generally about trying to flip it with production. I think with Merry Xmas Everybody, we just wanted to imagine that we were wedged between two Christmas trees on a sofa with roaring fire in the corner. So we went down a close harmonies and acoustic guitar route, which felt a bit different for us and was quite fun.”

This cover version is for Google Nest smart speakers. Do you think about how people will be listening to music when you’re making it?

“Like most people, I probably just digest music in a bunch of different ways, but it definitely doesn't affect the music that we make at all. I know that there are obviously artists out there who are tailoring their songs for streaming services and TikTok. We’ve been releasing a bunch of songs in different ways, to be a bit more spontaneous and have fun with releasing things outside of the usual album structure. But for my creativity, I still need a story arc in my head. I need the framework of a project to make loads of songs and have them all bounce off each other – that's just a really helpful way of working for me. But I definitely don't think about the way things are going to be consumed when I’m making them.”

Click here to read the latest on the race for the Christmas No.1.