Inside Liam Payne's Veeps showcase: 'There's a lot of talent out there that needs to be seen' 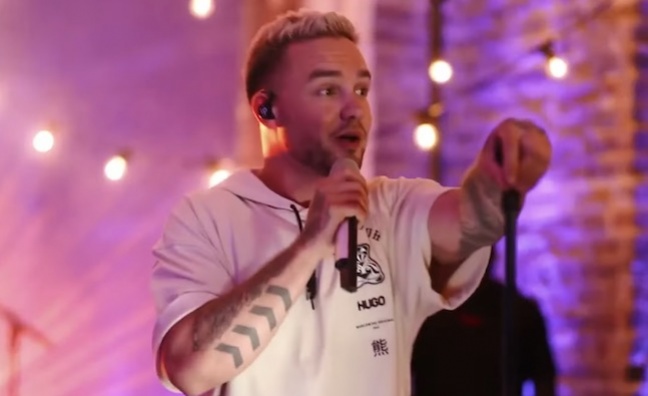 The team behind Liam Payne’s Veeps showcase have spoken exclusively to Music Week about the singer’s platform for new artists.

Liam Payne curates the online event featuring his favourite new acts. The ticketed livestreams are broadcast via direct-to-fan platform Veeps, which has become a major platform for artists during the pandemic. Live Nation acquired a majority stake earlier this year.

“I’m hoping we can carry this on, I think this is a really beautiful moment,” said Liam Payne after opening the show with a performance of Polaroid. “It’s nice to put some things out there for you while I’m busy making my music. There’s a lot of talent out there that needs to be seen, so it’s nice to be able to give that stage to the right people.”

Veeps co-founder Benji Madden (also a member of Good Charlotte) described Liam Payne and his team as “early adopters” of the platform and its possibilities for artists.

“Liam was the first guy, the first artist to step up and go, ‘Let me show you how you do this’,” said Benji Madden. “Actually, it was fun that we just got to be a part of the creative process of figuring out all the possibilities.”

Steve Finan O’Connor, head of music at Liam Payne’s management KIN, told Music Week that the Veeps audience grew quickly during the pandemic, starting at 13,000 for the first show, then 50,000 and 70,000 for the third.

“That really made it clear to us that this was a channel that was a whole new thing, it wasn't something that was just around the pandemic,” he said. “So we started to play with things like having a watch-back party, because Liam would actually do the show, then watch it back with 5,000 or 10,000 people. They would ask questions, you could pause the show, answer a question and interact with them on socials.

“We were the only people that put supports on. Then all of a sudden, Liam just said, ‘Well, why don't we use our social platforms to [support] artists that have had no exposure and no ability to go and do any of these live shows’. So we could expose them to the 300,000 fans that bought the ticket for Liam's livestream. It was an experiment to see if it worked. Now, all of their socials have exploded, most have gone up 70% or 80%.”

“It's not messing up your feed, it’s more direct to the audience,” he said. “He's really focusing on other artists that he knows his fanbase would find interesting. It’s worked really well and we've got some good ideas for how to expand it, following Benji's advice. We're doing it regularly and making it grow now.”

“It does take authenticity to have success with it,” explained Joel Madden. “You can see that Liam's curating everything. It's been really impressive. I do think you're going to see more artists understand that livestreaming is a new category, and the sooner you start building it out, the sooner you have an audience in that category. And it is a new audience.”

“The reason I love the Liam show is because he's so warm, and you can just tell that he's not phoning it in,” added Benji Madden. “He is having a blast and he really cares about these other artists and he cares about the fans.”

Steve Finan O’Connor opened up about the possibilities for Liam Payne on the Veeps platform, including potential collaborations now that Covid restrictions have been lifted.

“Liam had a really great idea, actually, which we're going to do [for a second show] in March or April [2022]. It’s Here’s To Summer, and he's going to find artists that are going to be doing festivals for the first time in the summer of 2022, and he wants to bring them to people [via Veeps] before the festival. So it will be trying to show people how great they are.”

Subscribers can read more on the rise of livestreaming here.