King Of The Dot reveals new global partnership with Twitch 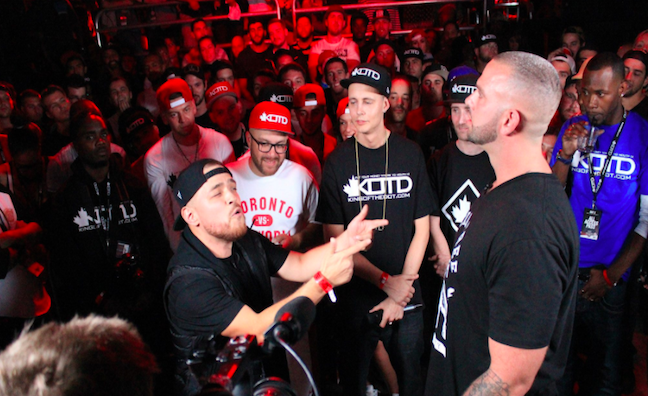 King Of The Dot (KOTD) – the rap battle league founded in Toronto, Canada in 2008 by Travis Fleetwood – has announced that it has entered into an exclusive worldwide partnership with Twitch.

An official press release stated that the agreement will bring “free Twitch battles to millions of fans with exclusive access to all of the live events from King Of The Dot’s newly announced Grand Prix 2020 tournament.”

KOTD has previously hosted recording artists such as Deadmau5, Drake and Method Man, as well as professional athletes and even Canadian politicians.

Speaking about the partnership, founder, Travis “Organik” Fleetwood, said: “For over a decade, we’ve been first-movers in battle rap.  Our Pay-Per-View model, our production team, our creative format for events and tournaments are all second to none and imitated around the world for good reason. Other platforms may have announced first but, like always, we’d rather build the ecosystem for the culture than take the first cheque that comes to us.”

The official launch release states that The Grand Prix 2020 tournament will air live battles every Sunday, starting September 20 until the end of the year where a champion will be awarded the largest prize in battle rap history.

As part of the deal, King Of The Dot will offer free access to all of their battles for subscribers. The league will also offer a slate of ancillary content focused on sports, gaming, music and culture with their artists and celebrity guests at the center of it.

Charles Morgan, co-owner of King of the Dot, said: “Twitch is the perfect fit for KOTD. The team has assured us that they are committed to augmenting the culture for our audiences and artists alike. We had conversations with all of the major services and the only team that made it feel right from the start was Twitch.”

Will Farrell-Green, head of music content at Twitch, added: “Rap battles are about an artist’s creativity and ability to engage with the energy of the audience. We’re working to create a virtual experience that captures the best parts of in-person events, with world-class content. Our global community loves Hip Hop, and rap battles are our next development as part of that strategy. We’re thrilled to be partnering with King Of The Dot, who are a leader in this space, bringing their rap battles to the Twitch stage.”

Earlier in the month, Amazon Music and Twitch partnered to announce the incorporation of Twitch’s livestreaming functionality into the Amazon Music app.