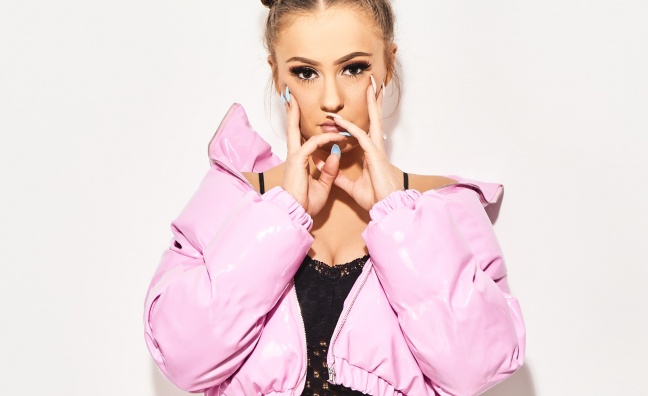 TikTok might be music’s biggest platform for hitmakers right now – as proved by this week’s blockbuster Music Week cover story and its nomination for Music Consumer Innovation at the 2020 Music Week Awards.

But the app’s real power-players aren’t musicians, they’re the TikTok creators; an army of (mainly) youthful influencers who can make or break a record with a single trend video or dance routine.

Chief amongst those in the UK is Holly Hubert, aka Holly H, a 23-year-old from the Channel Islands who has 16.6 million followers on the platform. She regularly uses music in her videos which can attract over 1 million views but also, more importantly, inspire thousands upon thousands of additional other creations (the TikTok metric that the platform says indicates true virality).

Holly H stars in our cover story this week, but she also stopped TikToking for long enough to talk to Music Week about the secrets of her social media success…

How did you get into being a TikTok creator?
“I started out uploading videos on Vine. The day I hit 100,000 followers on there, the platform emailed everyone and said they were shutting down. I was like, ‘Fantastic, thanks!’ Musical.ly was approaching people on Vine, then Musical.ly became TikTok and it blew up like crazy. Then there were 16 million [followers] and I was like, ‘This is insane’.”

And now it’s your full-time job?
“Yes. I call myself a professional weirdo on the internet, that is my career title.”

What is it that makes TikTok such a phenomenon?
“What people enjoy the most about TikTok is obviously music. The fact that you can create content with music, lipsyncing and dancing, is quite exciting for people. It’s something that was missing from other platforms.”

How do you pick the music you use in your videos?
“It completely depends. It’s always fun to do a good trend but, other than that, I pick things that I like. I like to pick songs that I think will do well on TikTok, or songs that I’m currently really enjoying, and make up something fun to that. I’ll hear a song and be like, ‘I want to make a TikTok to that’, that’s how it works in my brain.”

What sort of music works best?
“Pop and contemporary R&B songs do really well on the platform, but I’ve noticed so many different kinds of music as well. There was a Frank Sinatra song trending not so long ago and there’s been some really old music that’s come back and has been trending. That’s really cool, because it’s not just focused on what’s in the charts. I feel TikTok is creating the charts more than the charts are influencing TikTok these days. People you would never have expected or never would have heard before are suddenly getting their music heard, which is an incredible thing. I’ve discovered so many different artists which I probably never would have found without TikTok, which is really cool.”

Can people pitch you songs?
“I work quite closely with the major labels and they’ll send songs, campaigns and things they’re working on and say they’ve got a dance to a song or want me to make one up. But I only ever accept them if I like it. Authenticity is a massive thing. I know a lot of people say, ‘Authenticity is key and just be yourself’, but it’s so true. If I’m not enjoying the content I’m making, other people won’t either. If a label approaches me with a song and I do like it, 100% I’ll get involved with the campaign if it’s cool. But if I don’t, I won’t. I also get quite a lot of new artists email me or pop up into my DMs. I like being able to find some new artists as well if they send me their stuff.”

Do people pay you to use their songs?
“Sometimes, there are campaigns that involve music and they’ll give a fee to do a song and a dance or a trend. And if I enjoy it, I’ll definitely do it, it’s a fun way to collaborate on something. I always try and make sure it’s a collaboration if it’s something that’s paid for, and make sure it’s something that’s going to fit my content style as well as help them. If it’s not mutually beneficial, it’s not a good idea.”

Has being TikTok famous helped you in other areas?
“Yes. I’ve had some amazing opportunities through TikTok. I hosted backstage at the BRITs, I’ve been on Capital Radio and did livestreams with J Balvin and Ellie Goulding. Selena Gomez did a private screening of her Rare album before it came out and that was a really surreal experience. She was asking for our feedback and it was like, ‘So, Selena Gomez values our opinion on her music? That’s crazy’. I can’t get my head around it.”

How does it feel when you use a song and it takes off?
“It makes me really happy. The ability to be able to help so many artists is just really cool. Katy Perry has been sharing my videos and that’s insane to me, I keep looking at it like, ‘That’s Katy Perry sharing my content!’ Feeling like we help a lot of people in the industry and they think it’s beneficial is a really cool thing. At first people looked at TikTok like, ‘What are you doing, that’s strange’. But now people are seeing the benefits.”

How do you measure success on TikTok?
“I would always measure success on how people are responding. I’ve never wanted to be one of those people who measure things on views or numbers or followers or likes, if you get caught up in that world you end up taking it as a reflection on yourself. You can’t always count the views, sometimes you’ll be put on the For You page and your video might blow up like absolute crazy, sometimes your followers might not all see it. If my comments are full of people saying, ‘This made my day, thanks for making me laugh’, then I feel I’ve done something that’s successful. And if not, then I’ve got to do better.”

* To read our full, exclusive TikTok cover story, see this week’s edition of Music Week magazine, available now, or click here. To make sure you can access vital music biz information wherever you are, sign up to our digital edition here.