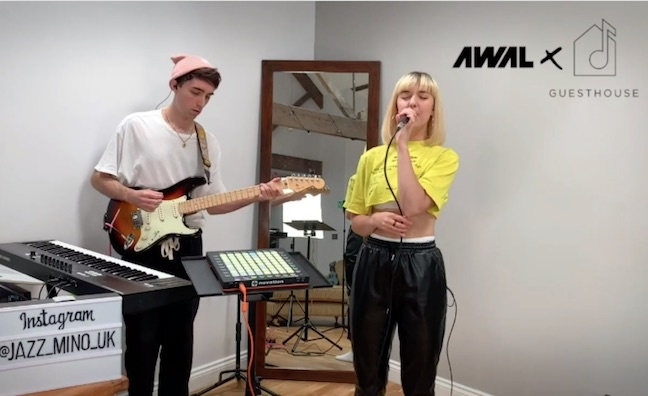 Modern Sky has been enjoying chart success with bands including The Lathums, The Blinders, The Slow Readers Club and The Lottery Winners.

The monetised livestream series was launched when Liverpool’s Sound City event couldn’t go ahead this year because of Covid-19. As CEO of Sound City, Pichilingi wanted to help new and rising acts who had lost out on gigging opportunities. As well as a share of the £4.99 monthly subscription, acts can benefit from merchandise sales during the performance.

With Guest House moving to three broadcasts of remote performances a week, the platform is building momentum. It’s also mixing up programming with more listening parties and interviews.

How are you expanding the Guest House broadcasts and how is the programming changing?

“Guest House started at the outbreak of the pandemic, which fast-tracked ideas we were having about taking some of the services we offer through Sound City online. Originally, Guest House was broadcast once a week, every Thursday, working with a number of artists as well as key UK and international partners.

“Now, the platform is client-led rather than being schedule-led. That means working with labels, publishers, promoters, agents or directly with artists themselves. We look at what they need and how Guest House can help them connect the artist or brands with their fans and wider audience.”

What kind of audience are you reaching?

“In terms of demographic, it depends upon the client. We’ve done shows for The Lathums, for example, that are obviously aimed at their particular fanbase, but we’ve also worked with companies like AWAL and Peer Music, and organisations like Shesaid.so to create programmes that showcase a number of people and artists, and that’s a different proposition. When we do an event with several artists on one show running concurrently with each other, the idea is that the support acts benefit from the main acts, and vice versa, by having their audiences cross over if you like – just as you would with a physical gig or tour. You hope that the audience will come for one show, watch the whole thing and discover new bands, artists and songwriters.

“In terms of numbers, we’re still in the R&D phase but the most we’ve had at any one time during an episode of Guest House is just over 1,500. We have just over 1,000 monthly subscribers, and that’s building all the time.”

What have been the highlights?

“The total experience has been fascinating. We’ve learned so much about the different ways artists can use online platforms like this. It’s another tool that can be used to connect with fans. It won’t replace live, of course but I do think live broadcasts like the ones we offer through Guest House are going to become more commonplace and grow in their use after the pandemic.

“The other thing is, in a short space of time, we’ve gone from the ‘white kid in skinny jeans’ with an acoustic guitar recording on a phone, to the audience demanding much more diversity of programming. Along with this, the audience also now demands much higher production values.

“As we move into the next phase of Guest House, and we continue to develop it as a platform, we’ll be able to put that into action in a seamless way so that artists, labels fans, brands – whoever is engaging with Guest House – all get what they need. What we’re trying to build is a community within Guest House so that music fans don’t just come for one gig but become loyal fans of Guest House itself. From a fans’ point of view, it’s also important they know that every penny they invest in Guest House, through buying into gigs and artist donations, is going direct to the artist or copyright holder.”

How effective can Guest House be at monetising performances?

“I think it can be hugely effective in monetising performances but that’s not to say it’s going to replace live. You have to ask ‘What is the original problem?’ For example, there might be a case where you have an artist and a promoter or agent who come to Guest House and use it as a means to sell a tour in the real world. They might do an online performance or a Q&A or something based on the merch that will be available. It can drive ticket sales, record sales, clothing sales or whatever else it might be.

“I also think the key will be the quality of the performances. As I’ve said, it’s no longer enough to just pick up a guitar and play to a phone camera but, by the same token, nor does it mean you have to have a six-camera shoot and run up huge costs. It’s about offering quality, something that’s innovative, and an alternative to what you usually get from a tour or a gig. The whole point of Guest House is for artists to be able to invite fans into their world, similar to how they do on Facebook or Instagram, but taking it a step further in a more intimate and commercially lucrative way.”

Have performances driven streams and sales?

The feedback that we’re getting is that artists are having a great time during the Guest House and that the response they’re getting from fans is really valuable. It’s too early to say whether it’s driving streaming figures but we already know it is a great vehicle for driving awareness for specific campaigns.”