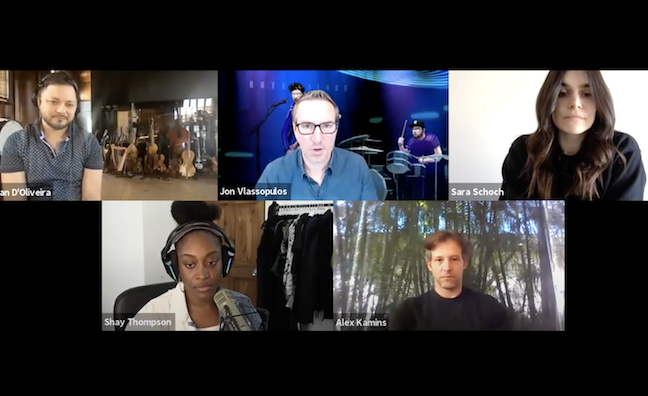 “The music industry is the most creative of all industries”

Based on this session, you could see his point. And, crucially, it’s a growing opportunity for artists and labels.

“Spotify has limited opportunities, right?” said Vlassopulos, VP, global head of music at the social and gaming platform. “You have a bio and a picture and a play button. So to be able to craft your vision in which your fans can run around in, that appeals to the partners we work with who are really excited about the medium and want to break new ground.”

Of course, music has long been intergral to gaming, and composer Brian D’Oliveira, of La Hacienda Creative, shared insights on that process. He worked on PlayStation 5 title Sackboy: A Big Adventure, which recently won two BAFTA Games awards.

“Music is essential to these experiences,” he said. “For me it's 50%, sometimes even 60% of the experience. Because even though people are interacting, a lot of times it’s the music and sound that get that deeper response from people, that unconscious feeling and visceral effect that they want to have with games.

“When I work with developers, they will [enable me] to really take the time to build these worlds into something that's special. It’s not just music for the sake of music, or wallpaper.”

Gaming and music have become more closely aligned during the pandemic. But Alex Kamins, SVP, head of new business & ventures at Warner Music Group, pointed out that it was happening already.

“The cohesion of music and gaming occurred long before Covid,” he said. “The first of these so called scaled virtual concerts happened well before the pandemic with Marshmello, when he performed in Fortnite. The Travis Scott Fortnite performance, although it happened in April of last year, the planning started well in advance.

“I think this pandemic certainly increased our focus as an industry on the importance of new revenue streams to our artists, while touring was shut down and while artists were out of recording studios and not making new music. But there is a long history of interesting integration happening in the intersection of music and gaming. On the other side of the pandemic, I don’t necessarily view IRL, or real life concerts, and virtual concerts as being substitutional for one another.”

So in the hybrid world post-pandemic, live and virtual are set to thrive alongside one another. But, crucially, what about monetisation?

Sara Schoch, executive, music brand partnerships at UTA, has worked on gaming deals including Dominic Fike with Fortnite. But she stressed that music and gaming partnerships are not necessarily about a big payout.

“It really just comes down to what the artist’s goals are,” she said. “If it's promoting new material; if it's getting a fee, because they're really viable in this space and they can command it; or if it's a passion project. Most of the time, at least from the deals that we cut, it's really about finding a game or a property that an artist is really passionate about and uses in their daily life, it really excites them.

“They see it not only as a way to express themselves to their fans about what they love to do, but hopefully also recruit more fans and define themselves within that space. Obviously, nobody wants to forsake a payday or revenue whenever they can, but typically that's not the driving force. It's really about the creative and how we can leverage a property first.”

Roblox has been one of the most active gaming platforms to partner with music. Following virtual performances by Ava Max and Lil Nas X, it has recently featured Warner Music artists Why Don’t We and Royal Blood.

Vlassopulos opened up to Music Week ahead of this event, and he took the opportunity during the virtual panel to underline the opportunities for labels and artists to create revenue from virtual merch.

“Millions of people come together, if not tens of millions, and they're generating healthy six figures in merchandise revenue,” he said. “So that's the sustainable ecosystem we're trying to engender. It’s also having a huge impact on social followers and streaming revenues, so you have that ripple effect from the platform. But it should work as a standalone as well.”

One area of the virtual world that’s become a trend topic is the NFT and its impact on music. Warner Music acts such as Gorillaz and Muse are embracing digital collectibles.

“It's an area that we're really excited about,” said Kamins. “Our goal is to help our artists to find new sources of revenue to diversify their income. So we're really interested in NFTs and we're encouraging a level of interest from our artists to lean into this space. We want to be careful about the types of NFTs that we put into the market. We want to make sure that artists are making money, but fans are also not getting burned. As an industry, we are thoughtful about the supply we bring to market.”

Subscribers can read our interview with Roblox’s Jon Vlassopulos here.

Find out more about the Music Week Tech Summit here.