Overnight news from around the world: Tuesday, June 21 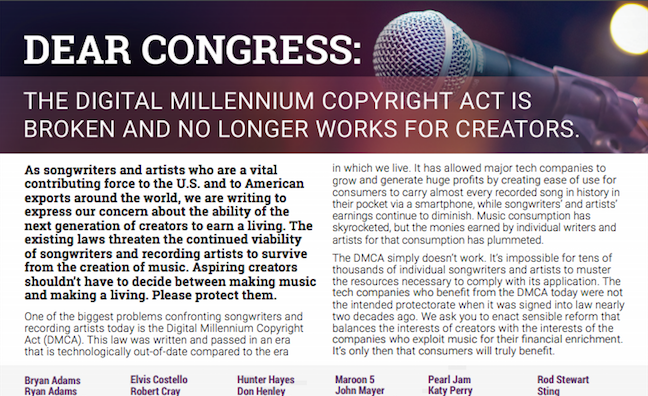 Industry unites to ask US Congress to reform DMCA

Irving Azoff has stepped up one notch his campaign against YouTube and safe harbour by launching an unprecedented campaign targeting policy-makers in Washington, DC and urging them to reform the Digital Millennium Copyright Act (DMCA). The twist is that the legendary manager is not doing the talking himself – he’s left it to a group of over 180 artists to tell lawmakers to change the law. The coalition of artists — which includes Aloe Blacc, T Bone Burnett, Elvis Costello, Taylor Swift, Don Henley, Elton John, Yoko Ono, Paul McCartney and Mark Ronson, among others – has signed an open letter in which they claim that “the DMCA doesn’t work” and ask Congress “to enact sensible reform that balances the interests of creators with the interests of the companies who exploit music for their financial enrichment.” For the signatories, the DMCA – which was passed in 1998 – has allowed "major tech companies to grow and generate huge profits by creating ease of use for consumers to carry almost every recorded song in history in their pocket via a smartphone, while songwriters’ and artists’ earnings continue to diminish. Music consumption has skyrocketed, but the monies earned by individual writers and artists for that consumption has plummeted.” The message was sent to Capitol Hill and relayed via advertising pages in such influential outlets as Politico and The Hill. “This is a historic moment in the music business,” said Irving Azoff, chairman and CEO of Azoff MSG Entertainment, in a statement. “This diverse group of artists coming together illustrates that this is a movement, which should not be underestimated. In all my years, this is the only time I can remember everyone – artists, songwriters, managers, labels, publishers, PROs – agreeing and collectively calling for change. This is just the beginning. The entire industry is united and committed to pursuing a fair resolution. We are fighting for the future.”

The first names for MUSEXPO Europe – the London conference from Music Week and A&R Worldwide – have been revealed, with key global music industry players due to participate. UK Music CEO Jo Dipple, BBC Radio 1/1Xtra controller Ben Cooper and Sony/ATV’s UK managing director and president, European creative, Guy Moot, are among the first big names set to appear at the Millennium Hotel on September 18-20. Amarpal Singh from India’s Saregama label, Nordic Music Export’s Anna Hildur Hildibrandsdóttir, BMG’s Korda Marshall, Radio 2’s Jeff Smith, Radio X’s Mike Walsh and a host of other leading executives will also star in a programme focusing on issues facing the industry now and in the future. Even more names are to be announced in the coming weeks. Registration is now open online

WEA Corp. has combined of all its direct-to-fan and merchandise capabilities into one newly-formed division: Warner Music Artist Services. The group will be led by Matt Young, who has been promoted to the new position of EVP, Warner Music Artist Services. Young, who joined the company in 2008, will report to Matt Signore, president, WEA (WEA is WMG’s global distribution, marketing, sales and research arm). The new division will bring together WEA’s entire ancillary rights operations with Artist Arena, which WMG acquired in December 2010. The Artist Arena brand will be retired, with all of the company’s staff moving over to the new group, creating a single team with expanded expertise and resources. Warner Music Artist Services will work with WMG artists and third party partners such as Shawn Mendes, Logic, and Coheed and Cambria, among others. The division will offer a comprehensive suite of ancillary rights services for recording artists, encompassing direct-to-fan e-commerce, fan-clubs, website design, ticketing, merchandising, marketing, account management, and data research & analysis.

Pop star Rita Ora has signed to Warner's Atlantic Records. The deal is global excluding Asia, with new material from the artist due for release later this year. Ora signed to Roc Nation for a five-album deal in 2008, but the two sides split somewhat acrimoniously after she sued the label last year for neglecting her. Roc Nation countersued a month later, claiming it had spent more than $2.3 million recording and promoting her debut album, 2012's Ora. A settlement was reached in May of this year. On top of performing, Ora has appeared in the films Fifty Shades of Grey, Southpaw, Fast And Furious 6, and appeared on both The Voice and The X-Factor as a judge. Brand partnerships thus far have included Adidas, Rimmel and Tezenis. (Music Week)

Attorneys for Jimmy Page, Robert Plant and Warner Music have urged US District Judge R. Gary Klausner to halt proceedings in the Stairway To Heaven trial now, as the plaintiff hasn't proven the existence of copyright infringement. Michael Skidmore, the trustee who manages the estate of songwriter Randy Wolfe, rested his case yesterday after three days of testimony. Led Zeppelin may now present their own case, but before the trial resumes, the judge is being asked to make a judgment as a matter of law. The defendants argue that copyright claims fail, because the copyright registration of Taurus hasn't been put into evidence, the Wolfe Trustee does not own that copyright, and the plaintiff has not presented admissible evidence of Led Zeppelin's access to Taurus, nor evidence of striking or substantial similarity between the musical compositions. (Billboard)

Nathan Barley Phillips is re-joining the board of national music and media PR firm, Hold Tight PR LLP, as creative partner and board director. Now in its seventh year, Hold Tight PR has offices in London and Scotland and counts eOne Heavy, Sumerian Records, Fearless Records, Impericon Festivals, Techfest, Victory Records, UNFD and many more amongst its client list. With over 15 years’ experience in brand management, marketing and business development gained within the UK’s music and aerospace industries, Phillips’ appointment comes as Hold Tight PR is ramping up its efforts to fuel the rapid growth it has enjoyed in recent years. Currently a serving board member at AIM and A&R director for Invictus Music & Media, Phillips formed Basick Records in 2005. Releasing early material from emerging UK bands such as Enter Shikari and Fellsilent, the Basick label soon became synonymous with the cutting edge of heavy music, going on to put out records from Misery Signals, Bury Tomorrow, Sikth, The Algorithm, Skyharbor, Ion Dissonance and Devil Sold His Soul among many others. Now a fully-fledged international record label celebrating its 10th birthday this summer, Basick continues to be one of the forerunners in its genre. At Hold Tight, Phillips will be responsible for business development, operations and client services. He will also head up a new media training unit at the company.

Roger Daltrey CBE, founding member of The is to be honoured with the 25th Music Industry Trusts Award (MITS), in recognition of his outstanding contribution to the music and entertainment industry and many charitable causes. The Award will be presented on Monday, November 7 at a gala ceremony in aid of Nordoff Robbins and the BRIT Trust. The Music Industry Trusts Award, celebrating 25 years this year, has raised over £5.5 million for Nordoff Robbins and the BRIT Trust. The Award was founded to recognise outstanding achievement in the UK music industry. Previous recipients include Sir George Martin, Ahmet Ertegun, Sir Elton John and Bernie Taupin, Sir Michael Parkinson CBE, Lord Andrew Lloyd Webber, Sir Tom Jones, Kylie Minogue OBE, Jools Holland OBE, Gary Barlow OBE, Annie Lennox OBE, Michael Eavis CBE and Simon Cowell.

No.4 on today’s sales flashes, jumping up 87 places, Sigala’s new single, Give Me Your Love feat. John Newman and Nile Rodgers, tops this week’s Official Trending Chart. It’s the biggest sales difference in the chart, with Charlie Puth’s collab with Selena Gomez, We Don’t Talk Anymore, coming next in terms of growth – it’s at No.19 in the OTC, and has a difference of 38 places.

The Association of Independent Festivals has announced the dates of Festival Congress, which will take place in Cardiff for the third year running later this year. Confirmed for November 1-2 at the Wales Millennium Centre, Festival Congress will play host to over 400 festival delegates and will be a celebration of the independent festival industry. John Giddings (Isle of Wight Festival/Solo Agency) and Lee Denny (Leefest) will take part in a fireside chat entitled Songs of Innocence and Experience. There will be a quickfire Talking Heads session from Simon Parkes (Brixton Academy founder) telling his incredible story of buying the venue for a £1 and turning it into one of Britain’s most iconic venues. Sammy Andrews (director of Entertainment Intelligence) will talk about the connections between streaming and ticketing and the potential VR and augmented reality for the live industry. There will also be a discussion led by Zac Fox (Kilimanjaro Live/NOWIE) exploring gender issues in the industry and possible solutions alongside a Festival Frontiers panel in which the brightest minds in the industry will reflect on the 2016 season and discuss trends, challenges and the future festival landscape. Finally, delegates can take part in a series of Lucha Libre breakout sessions on topics ranging from city festivals to festival finance and refuel with a Recovery Brunch following the awards. The programme will, as always, include the Festival Congress Awards, which take place at The Depot Warehouse venue, with a street food festival banquet and Rob da Bank’s Purple Rave tribute to Prince. Awards categories will include New Festival On The Block, Mind Blowing Spectacle, Festival Live Act Of The Year and Smart Marketing. Each year Festival Congress adopts a different theme and this year’s will be ‘Day of the Dead’, with production and props from House of Bestival. Tickets are on sale now, priced at £100 for AIF members, £135 to Friends of AIF and £185 general sale exclusively through headline event sponsor The TicketSellers.