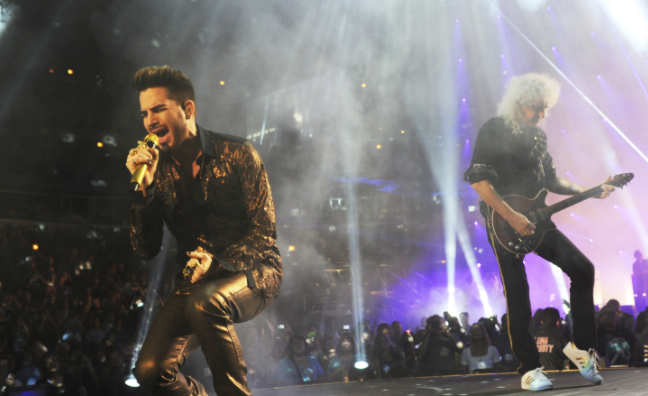 Queen + Adam Lambert have announced the launch of their first-ever live-concert VR experience. VR The Champions, which will be in full 360 degree 3D, is set to premiere to a global audience through VRTGO, Universal Music Group’s VR platform.

The video gives fans front row access to an on-stage experience with the band. With ‘flying’ 3D and 360 degree video, the viewer will be virtually hovering above the audience and can fly among the band members themselves, as they perform on the grand stage of Barcelona’s Palau Sant Jordi.

VR The Champions was shot in May 2016 and features performances of Radio Ga Ga, We Will Rock You and We Are the Champions. It will be available for $9.99/€10.99/£9.99 on VRTGO, a VR platform that is available for iPhone and Android and accessible through most web browsers.

The product is compatible with the OWL VR kit designed by Brian May, and can also be viewed using any VR viewing system including Oculus, Google Cardboard, Samsung Gear VR and HTC Vive. It was filmed in stereoscopic 4k with ambisonic audio, a full-sphere surround sound technique, to provide an experience that virtually captures the live concert experience.

Project instigator Brian May says, “This is the fulfillment of a dream. Through this unique Virtual Reality creation, fans around the world will for the first time be able to experience the excitement and energy of a Queen show in their own homes. Many of you have seen VR, but not VR like this!”

VR The Champions, created by Miracle Productions and Eagle Rock Films, is directed by Jannicke Mikkelsen and stars Brian May, Roger Taylor, Adam Lambert, and the band.