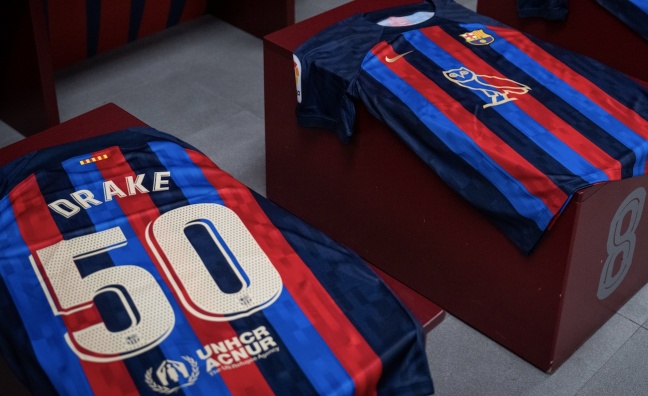 Light and smoke filled the sky above Spotify Camp Nou on Wednesday night, as the streets around the famous old stadium heaved with people and the crack of fireworks thundered off its concrete exterior. The noise and intensity of the atmosphere before Barcelona kicked off in a must-win European match against Inter Milan offered an appropriate fanfare for the biggest moment yet in the club’s partnership with the streaming giant.

Today (October 14) Drake revealed the first major artist partnership following Spotify’s deal with Barcelona, which was announced back in March. Drake has worn Barcelona’s colours before, but now has his very own, limited edition, not-for-sale shirt, featuring his instantly recognisable owl motif in the space usually housing the Spotify logo. To celebrate his recent milestone of reaching 50 billion streams on the platform, the men’s team will wear the shirt in the latest edition of El Clásico, their derby with Real Madrid this Sunday, beaming Drake’s OVO Sound logo onto screens around the world and offering a taste of the possibilities the partnership brings with it. 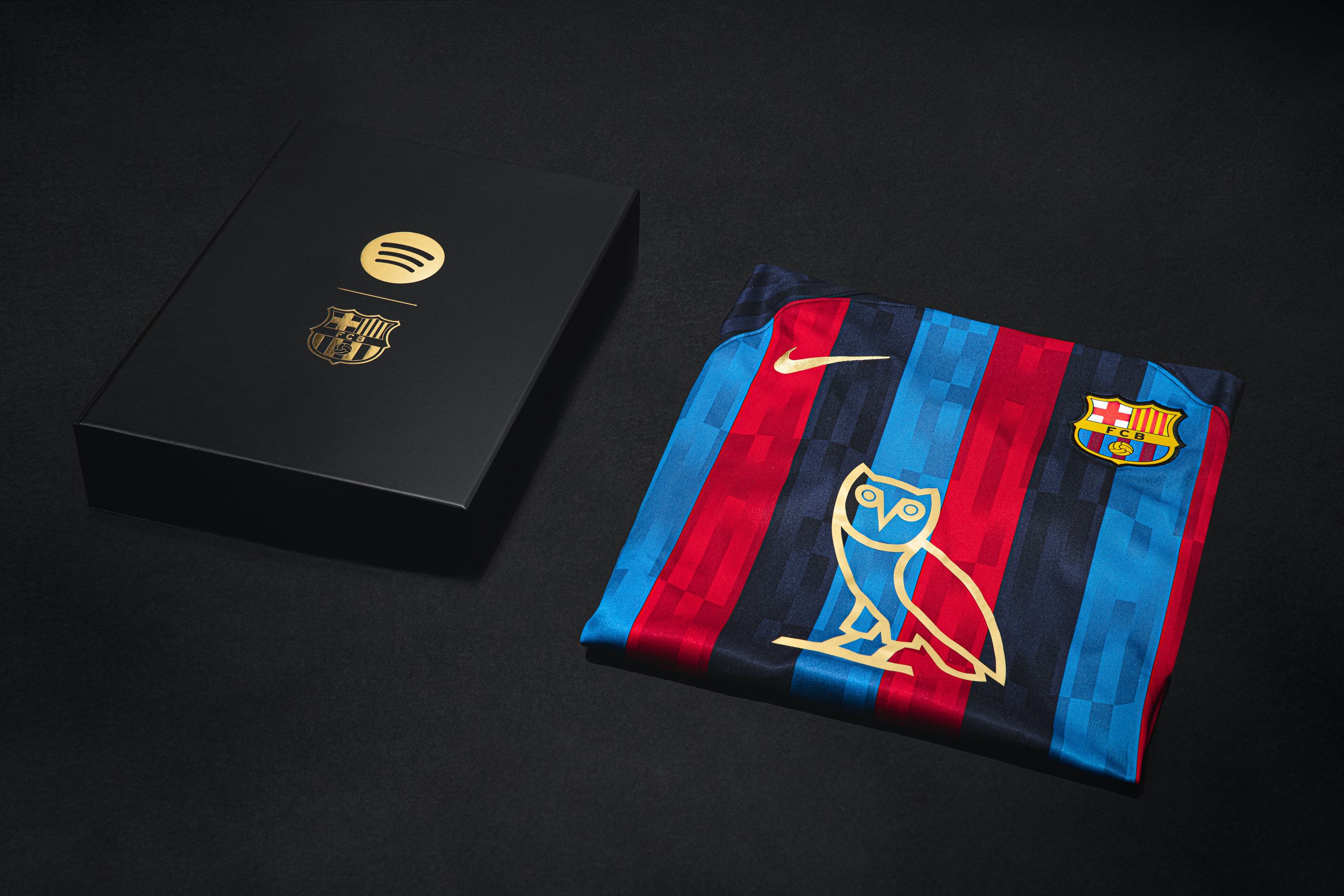 Simply, this is a combination of one of the world’s biggest artists, with arguably its most famous football team. Now, after months of speculation as to what Spotify’s deal with Barcelona might mean for music, comes its first milestone.

As Marc Hazan, Spotify VP, freemium partnerships and business development, who was in the Catalan city for the big reveal, put it, “Gone are the days of gold discs…”

This is Spotify putting a flag in the ground, its latest marker of what’s possible in the modern music industry. How to increase Drake’s already incredible reach? Celebrate his latest milestone with a commemorative Barcelona shirt.

The power of the potential link between Barcelona’s huge support and artist fanbases is clear. During Wednesday’s game – where the energy produced during a thrilling 3-3 draw seemed to suck air into the stadium’s vast bowl and push it right back out again, to pulsating effect – LED screens around the pitch flashed with artist names and images.

This is the first stage of Spotify’s partnership: so far, 16 artists from 10 different territories (including Cat Burns, Shygirl, Calvin Harris, Muse, Blackpink, Fireboy DML and Aitch) have featured on the advertising hoardings around the pitch. The crux of the project, said Hazan the morning after, is to showcase artists. Spotify plans to use the reach Barcelona enjoy, in territories such as Latin America and South East Asia, for example, to boost artist profiles.

Further plans for shirt takeovers and other projects are underway, but first comes Drake’s moment. Barcelona players will wear warm-up shirts with the number 50 on the back on Sunday, before changing into the limited edition strip for the game. As for where the partnership goes next, Hazan suggested that anything could happen.

“It’s [going to be] a long relationship and we look forward to innovating with the club and different artists and formats,” he said. “The potential is endless.”

Sitting down for an exclusive chat with Music Week, he talked about what Spotify’s deal with Barcelona can offer the music business… 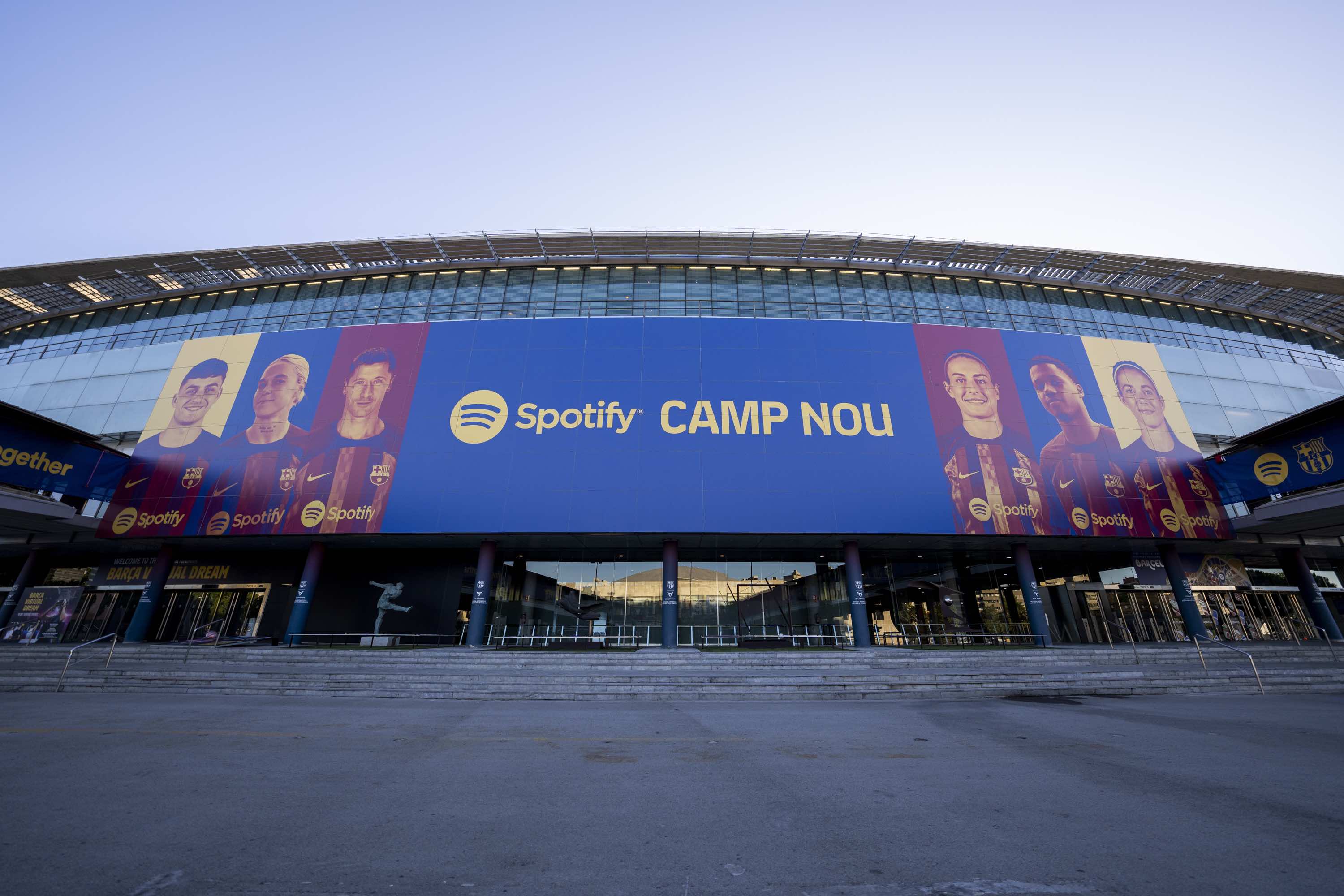 How long has the Drake shirt takeover been in the works?
“The partnership itself is not that old. It was maybe a couple of months ago that we started getting going, the shirt takeover concept was an integral part of why we wanted to do this partnership. The moment came with the landmark streams and the game, El Clásico, and we just felt it was the perfect match. We tried to keep as few people as possible involved [to keep it a secret] and we have good relationships with the club, with the artist and management, so we were able to use those connections to move pretty quickly and seamlessly. I think everyone was just so excited by the prospect and the scale of it.”

Drake arguably doesn’t need promo or adverts, so what does this link up do for him?
“Partnering with us in such an innovative way on such a big scale is something that he’s going to be really excited about. No one’s ever done this before and it’s unique, football and its fandom is huge and to be the first artist to do it is very exciting. We’re very happy to be able to offer this opportunity to him at this massive moment for the platform, 50 billion streams for an artist is huge. This [partnership] is new, so we’re constantly learning, evolving and working with the club on ways we can integrate services more and more. As those evolve we’ll have more and more opportunities artists can benefit from, not just the Drakes of this world.”

No one has ever done this before

Spotify has been using the LED boards at the Barcelona stadium all season, how is that process unfolding?
“We’re using them extensively for every home game. We can do four or five every match and we can geo-target that, so if you’re watching the game in India, for example, we can target any given Indian artist on the LED so it looks like it’s being displayed in the stadium, but in reality it’s physically something different. The LEDs are really interesting, and we’ve done some cool match-ups between players, former players and artists as part of the Barcelona pre-season US tour. There’s more in the works, too. We want to try lots of things, lots of formats, see what resonates and really build on it.”

Will Spotify’s playlist brands be part of this process?
“Some of the priority acts on the playlist brands are being showcased on the LED screens. Equally, should we choose to, we could showcase the playlists themselves on the LED. We’ve done some general Spotify branding on the LEDs and some promotional offers for Premium trials. Blackpink shared [a photo] of their [appearance] on the LED, so did Fireboy DML. Artists are seeing this as quite a cool format, much like they see our Times Square billboard, this is becoming one [like that] if not bigger.”

What can artists and their teams do to get involved?
“[It’s about] continuing the relationships and the way they work with us right now. This [Barcelona] is going to be one of the things we consider when working with artists now, it’s going to be part of our global toolkit. These assets are going to be developed and brought to as many artists as possible.”

Are there any plans for live events in the works yet?
“Nothing right now, but it obviously has huge potential. The stadium has been used in the past for concerts, U2 and Bruce Springsteen have played there in the past. We’ll look into it over time.”

Is it fair to say this is the biggest thing Spotify has ever done?`
“That’s a big question. It’s certainly big. If you look at the stage, the viewership on [Sunday’s] game, it’s in the multiple hundreds of millions. I’m a football fan myself and I see the potential of bringing the two worlds together. They’re the best partnerships, when you have so many constituents that can benefit and where there are obvious ways that everyone can benefit.”