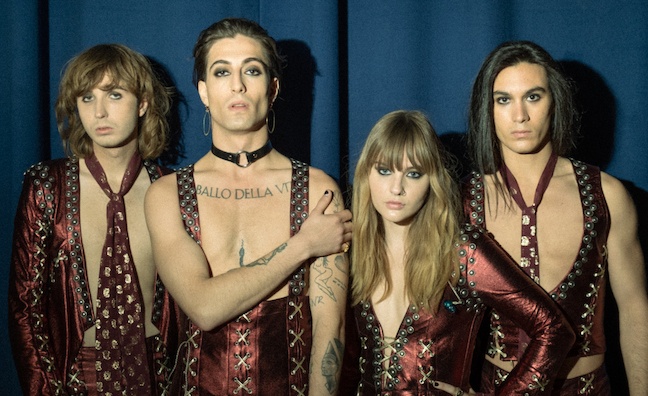 Masked Wolf’s viral hit Astronaut In The Ocean as the most used song in TikTok creators’ videos. The track was released by Parlophone in the UK and peaked at No.12 (547,956 sales to date - Official Charts Company).

Although TikTok confirmed that the track by the Australian rapper was the most popular this year on the short-form video app, it does not break down the volume of creations during 2021 alone. Astronaut In The Ocean has been featured in 8.8 million videos on the platform since its release in 2019.

The mighty Maneskin (pictured) are in second place for the global listing of most used songs in video creations. The Eurovision winners made an impact on the short-form video app with Beggin’, which has featured in 10.4m TikToks in total. The song was first released in 2017 and is on Columbia in the UK.

The Italian group’s cover version of the song, which was originally released by the Four Seasons, peaked at No.6 in the UK (479,227 sales).

Popp Hunna’s Adderall (Corvette Corvette) was the third biggest song globally for Tik Tok creations (and the biggest in the US), followed by ElyOtto’s SugarCrash!, and Stay by The Kid Laroi and Justin Bieber.

Cardi B makes an impact on both the US and global charts, while TikTok star Doja Cat is at No.4 in the US rundown with SZA collaboration Kiss Me More.

Olivia Rodrigo, who topped Spotify and Apple Music charts for 2021, makes No.10 on TikTok’s US rundown with Drivers License.

In its look back at the year, TikTok also highlighted the impact of Ed Sheeran’s Euro 2020 livestream, as well as breakthrough stars Nathan Evans (1.4m followers) and PinkPantheress (1m).

Rich Waterworth, general manager, TikTok UK and Europe, said: "Our Year on TikTok is a homage to the diversity and unpredictability of 2021. While the UK was at its lowest, we had modern day Sea Shanties on the airwaves, powered by a TikTok trend and our community. As we experienced the joy and pain of a near-win at the Euros, we brought Ed Sheeran's new music to millions of people during our UEFA Euro 2020 Show.

"In the past year, TikTok has been at the centre of so many cultural moments, and we've been proud to be a place where people can come together, through good times and bad, to laugh, smile and express themselves. As we head into 2022, we know that our community will continue to surprise us, bringing joy to everyone through their creativity."

The most popular TikTok tracks globally in 2021

Masked Wolf - Astronaut In The Ocean