Try before you buy: How record stores embraced streaming to drive the vinyl revival 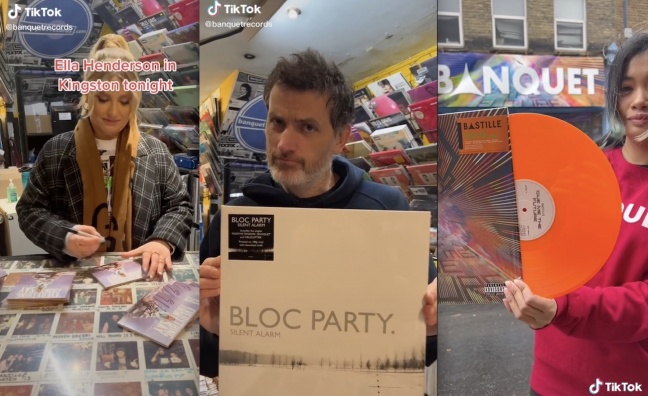 Digital was once a dirty word in record shops - digital-first was even worse.

When David Bowie made his 1999 album Hours available to buy as a download ahead of the physical release, HMV declared: “Retailers are not going to stand for it.”

But with the vinyl boom continuing in tandem with streaming growth, the two have become increasingly complementary. And with LP prices growing to an average of £24 (many new and catalogue titles are more), try-before-you-buy is a sensible approach for many music fans. It is consumer behaviour that may have been further encouraged during the pandemic when listening in-store was off limits.

Rough Trade has turned to Spotify and Apple Music for its Counter Culture, Rough Trade Recommends and albums of the year playlists. Indie retailers including Sister Ray and Phonica have also utilised Spotify to promote new releases.

For Banquet Records in Kingston, winners of the Independent Retailer trophy at the Music Week Awards 2021 (and 2022 nominees), TikTok is the promotional platform of choice. The team have got into the spirit of TikTok with a regular roll-out of humorous clips (The Cure being mistakenly filed under ‘T’ has almost 200,000 views) alongside exclusive content. #BanquetRecords has 8.4m views.

“That was one positive to come out of lockdown, it was a morale booster,” Banquet co-owner Jon Tolley told Music Week. “We do a TikTok every day. It’s great fun and it actually sells records too.”

While an early digital release might once have seen an artist fall out of favour with a retailer, it’s now become a necessity for acts waiting on a vinyl production slot. Don Broco recently scored their first No.1 album with Amazing Things, a result unaffected by the digital edition dropping three months earlier than the vinyl.

We feel that streaming certainly helps drive the popularity of vinyl

Some fans are buying and listening to vinyl, while for others it’s an object to treasure (and most cassettes are merch items that appear to go unplayed). While the relationship between streaming consumption and vinyl purchasing is impossible to measure based on market data, the anecdotal evidence is convincing.

“We’ve always seen the growth in streaming as a positive,” said Rough Trade co-owner Stephen Godfroy. “Vinyl has emerged as one of those evergreen analogue items that has proved its worth in this easily distracted world. We feel that streaming certainly helps drive the popularity of vinyl, for sure.

“Digital natives aren’t satisfied with music access alone, so having a curated collection of music of your own to cherish is now an aspiration for many young music lovers. A rich, eclectic vinyl collection is emblematic of personal identity, ideals, experiences. The disposable ubiquity of digital access in many ways teaches the value of scarcity and knowledge as a means to navigate all this endless choice. Vinyl rewards, educates and conveys individuality better than many things that we acquire and collect in life.”

One striking statistic that did emerge last year came from IFPI’s Engaging With Music report, based on a global online survey of 43,000 respondents. The study found that 78% of people surveyed listened to music through licensed audio streaming services (including ad-funded), whereas 81% of those identified as vinyl purchasers paid for a music streaming service without ads interrupting their listening.

“It’s a conversation I have a lot with customers,” said Keith Milne, an HMV store manager for more than 25 years. “They listened to an album on Spotify or Apple Music, they liked it and they’re going to buy the album. A lot of people use it almost as a try-before-you-buy. You could say streaming is a disadvantage to the physical market, but I actually think it’s an enhancement in some ways - it encourages physical purchases.”

The IFPI report also found that 80% of vinyl purchasers engaged with music on social media, 57% owned a smart speaker and 67% discovered new music or new artists on a weekly basis. They spent an average of 22.1 hours listening to music each week - 20% above the average listening for all respondents.

A Spotify fan study last year revealed that for most genres featured in the report, the most popular merch item was actually vinyl - a direct link between a DSP and an LP purchase.

Despite supply and production challenges, vinyl sales registered their 14th year of consecutive growth in 2021. It resulted in ERA reporting the first increase in physical music revenue in two decades.

“Indie record stores, just as much as digital services, have been the big winners of the past decade,” declared ERA CEO Kim Bayley in the newly-published Entertainment Retailers Association 2022 Yearbook.

Click here for our talking points from the 2022 ERA Yearbook