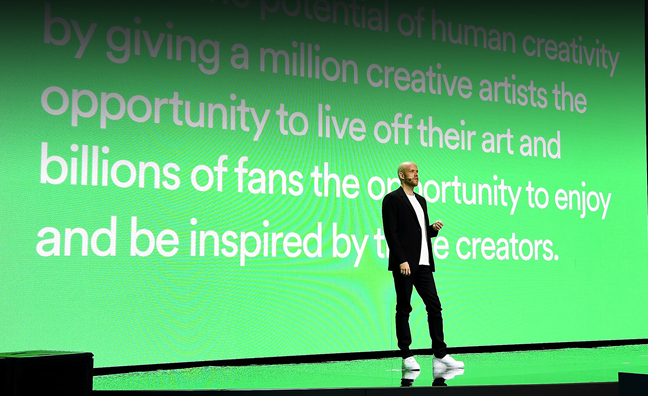 Spotify are getting the hang of this earnings call business.

When the streaming company first went public, executives were unused to the level of public scrutiny that comes with that territory, and it showed. Now, though, Daniel Ek and Paul Vogel are as slick and sure-footed as you’d expect any CEO/CFO combo to be.

Which does mean, however, that they don’t say very much. That helps steady the share price – drifting downwards after today’s financial statement, a mixed bag of rising subscriptions and widening losses – but is of less use to music business executives trying to anticipate their next moves.

Luckily, Music Week has got your back. Here’s our guide to what Ek said, and our thoughts on what he actually means…

What he said: “We are pleased with our results, which met or exceeded our guidance by almost every metric. After making adjustments to help us weather the pandemic in Q1, consumption returned to normal levels this quarter. Monthly Active Users increased to 299 million and subscribers grew to 138 million, both exceeding our expectations. Advertising revenue, which took a significant hit in Q1, improved notably throughout the quarter, and we feel good about our momentum as we enter Q3.”

What he meant: The received wisdom that coronavirus has given streaming companies a boost is true, but maybe not as true as everyone thinks. While those subscriber numbers will keep Spotify comfortably ahead of the chasing pack, Ek is unusually focused on other areas. With Average Revenue Per User down 9.9% to €4.41, he knows the labels are looking long and hard at pricing and Spotify’s free service. So he needs advertising to recover in order to help earnings from that tier keep pace and stop suggestions that it should be turned off from gaining momentum. Later, he referenced radio’s $50 billion-odd advertising revenues – he sees taking a slice of that as every bit as crucial to Spotify’s future as expanding subscribers.

What he said: “We also continued to invest in our audio-first strategy, signing exclusive deals with some of the world’s most well-known creators and most powerful voices. Earlier today, we launched the first episode of The Michelle Obama Podcast and it features a conversation with a very special guest, President Barack Obama. Our podcast catalogue now has over 1.5 million shows, 50% of which launched in 2020. While it’s been gratifying to see so much enthusiasm for these announcements throughout the quarter, it’s important to remember that with many of our newest shows, we are still early in the process. In some cases, like DC Comics, we need to produce the content and in others, like Joe Rogan, it has yet to launch on our platform. There’s still work to do and much more to come.”

What he meant: This looks like a shot across the bows of the music industry. Although deals like Joe Rogan look hugely over-priced, Spotify likes podcasts, because they reduce its royalty payments, and therefore increase the slice of subscriptions it can keep for itself. Wall Street likes the last part of that sentence even more, hence analysts on the call asking multiple questions about the format, even though podcast ad revenue lags way behind that of music. The music industry is less keen, suspicious that Spotify’s enthusiasm for podcasting is aimed at reducing their importance to the platform and, ultimately, their revenues. But if you were expecting Ek to back off, think again - on the call, he pledged more exclusive podcast deals, not fewer and stressed: "Spotify is now going after all of audio – that's a significantly larger market than the music industry".

What he said: “On the music front, we entered a new, multi-year global licence agreement with Universal Music Group that reflects our shared commitment in growing the industry and supporting artists at all stages of their careers. UMG will leverage Spotify’s Marketplace tools for both frontline and catalogue artists, to connect them with fans, grow their audience, and better monetise their fanbase. We’ll also work together to develop new products and tools that drive discovery and engagement at a scale that has never before existed. Spotify has now surpassed 60 million tracks globally, giving artists even more opportunities to connect with their biggest fans. And just last week, Taylor Swift’s surprise release of her new album Folklore broke the first-day record for a female artist’s album in Spotify history. She also became the most streamed artist on Spotify on any day this year with nearly 98 million streams on July 24 alone.”

What he meant: While no one knows the detail of the UMG deal, or what concessions Sir Lucian Grainge obtained, Ek is presenting it as an endorsement of Spotify’s overall model. Some of this sounds like it’s handing Universal – which, lest we forget, still holds a stake in Spotify and, in turn, is 10%-owned by Spotify ally Tencent – a competitive advantage over other labels (something Ek seemed positively blasé about in his Variety interview). Later in the call, he described Universal as going “all-in” on Spotify's services, a clear sign he wants the other music companies to sign their own deals, pronto. After all, even long-time Spotify holdout Taylor Swift is now feeling the benefit of the platform. Is it a bit rich for Ek to be taking credit for Folklore’s stunning global success? Yes, but probably not as rich as he is.

What he said: “Just this month, we launched in Russia and 12 other European countries. Our first week in Russia was huge, even bigger than our first week in India. If we do this right, we have the opportunity to reach 250 million more listeners in these markets over the long-term. We’re now operating in nearly every country across Europe, but there’s still a lot of pent up demand for Spotify in markets around the world, which is why we have plans for further expansion globally.”

What he meant: Despite Ek’s claims here, the jury is still very much out on whether its Russian launch is a success. Meanwhile, the jury on its chaotic Indian launch is almost certainly arguing furiously and unable to deliver a verdict. Ek needs to present Spotify as an attractive proposition for emerging markets as only global growth can deliver the scale and profitability his investors demand. And true, there’s little doubt Spotify can hoover up younger, hipper consumers around the world. But the truth is, for mass audiences, most countries already have their own established streaming services, at lower price points than Spotify likes to offer. Breaking into those markets will be expensive and won’t deliver immediate profits – and Ek wants both investors and the music industry to realise that.

What he said: “I've never been more bullish about where we are today and our future opportunity. There are still billions of people who have yet to discover on-demand music streaming or listen to a podcast, and many more we have yet to reach in markets around the world. Speaking of podcasts, I’d encourage you to check out Spotify’s new For The Record podcast this Friday. Paul and I will be sharing additional thoughts about the quarter and discussing my philosophy on growth, innovation and the importance of risk-taking. Feel free to check that out. Thanks again for joining us this morning. This is an exciting time to be focused on audio, and we’re only just getting started.”

What he meant: In his closing remarks, Ek chose to mention podcasts three times and music just once. You do the maths.

* For the full details of Spotify’s latest financial results, click here. To make sure you can access Music Week wherever you are, sign up to our digital issue by clicking here.