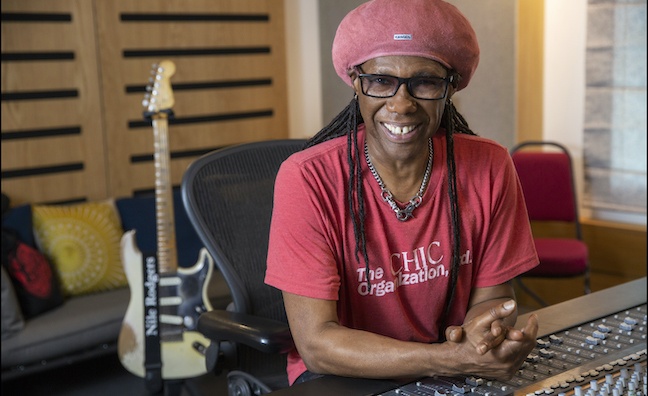 On November 11-12, Abbey Road Studios is opening its doors to the next generation of artists and creatives for a free, two-day festival, Amplify.

“It’s a marriage made in heaven. To have access to the brains, the technology and the space for all the projects I’ll be working on, hopefully for the rest of my life – it’s heaven. It’s the perfect headquarters for me. The artists I’ve had in these rooms since I started, they really run the gamut. There’s probably been almost 100. I do find it funny when people say I’m the chief of something because, honestly, I think of myself as a worker bee. I just love to come and work and create and help other people achieve their artistic goals. I never demand artists come here in order to work with me, I just ask them if they’d like to. They almost always say yes. I guess they want to catch the vibe that’s in the walls here. I’m honoured, and [Abbey Road] truly have let me do anything I want.”

Can you describe the vibe of what happens within those walls?

“Oh, come on. Of course it’s magical! I’m a child of the ’60s. The first song I ever learned to play on the guitar was A Day In The Life by The Beatles. And now Paul McCartney is my buddy and that’s insane to me. But to be able to talk to Paul McCartney, face-to-face, and ask him questions about the most clever arrangements? To ask about I Am The Walrus and then he breaks down the ending for me and how they achieved that, note for note, musician by musician? That’s one of my favourite things in life.”

What drew you to the role in the first instance?

“Well, we can always talk about The Beatles, but that doesn’t cover it. I think about all the classical music that’s been recorded here, right from the beginning. But then you also have someone like Kanye West, known for hip-hop, he came and did his orchestral record here. That shows what other artists are thinking when they think of Abbey Road. Kanye West could have chosen anywhere in the world. Why did he do it here? Artistically, it must have meant something to choose these walls.”

It's heaven. It's the perfect headquarters for me

How much time do you spend in the building?

“I’m sitting in a film editing room here right now. I can see the garden from here, which really is fantastic, I’ve sat out there many, many times. After I’ve done something with a large group, like a string session, we can all sit out there and bond. I’m here a great deal, if I’m working with artists. Prior to the pandemic, I was almost living here, staying until the wee hours of the morning. I don’t know if that’s standard operating procedure and it would depend on the artist, but generally we would work until we didn’t feel like working any more. No one complained, but perhaps I’m not very demanding.”

You’ve run songwriting camps at Abbey Road, how has that been?

“Well, the groups can be any size. But the great thing about doing it at Abbey Road was using Studio Two, which is big enough for five groups to work in separate sections. There wasn’t any sound bleeding and everyone had their unique space. But we were all in one room and all on the same team, so we could all venture towards one person’s project and throw our ideas in. I can’t wait to do it again. And it’s a very common way of writing in today’s world. I’m learning as well as teaching, which is very cool.”

Working at Abbey Road, do you find there’s a contrast between the history of the place and the day-to-day reality?

“Hey, I don’t think I will ever tire of magical musical environments, it’s not how I’m wired. If someone comes in and it’s their first time here, then it feels like my first time here. I think I could work here for ever.”