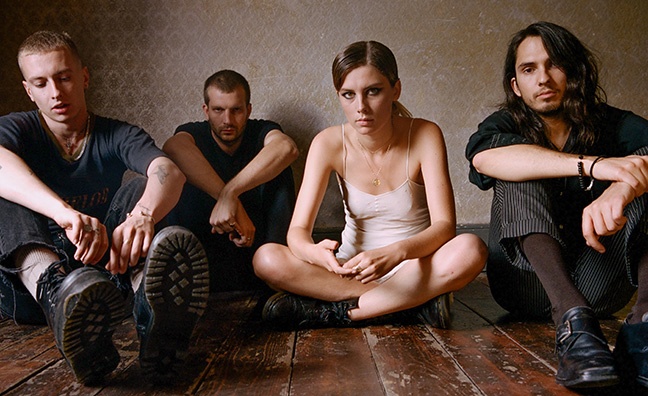 It’s early Friday evening on the late August Bank Holiday weekend and Ellie Rowsell is picking her way through the backstage confines of The Boileroom in Guildford, trying to find somewhere quiet for a chat.

Most of the country may be clocking off and skipping gleefully to the pub, but Wolf Alice are working hard. It’s the last night of an up close and personal UK tour that’s also seen them visit tiny venues in Middlesbrough, Pontypridd and Tavistock, and there are surprise shows at Reading & Leeds Festivals to come over the next two days.

“It’s been fun,” Rowsell begins. “It’s scary sometimes too, seeing all those faces, people yawning, picking their noses and that…”

Audience habits notwithstanding, Visions Of A Life is due on September 29 via Dirty Hit, with Michael Winterbottom’s film, On The Road, which follows the band on tour and blends fiction and real life, out on the same day.

Then, there’s more touring in America and at home - including their biggest-ever gig, at London’s Alexandra Palace in November. Wolf Alice - completed by guitarist Joff Oddie, bassist Theo Ellis and drummer Joel Amey - know there’s no let-up in sight.

“Oh I hate it!” Rowsell offers, tongue rammed into cheek. “No, I love it. I love the idea of people being excited about something you’ve created.

I like seeing their favourite songs, how they analyse the album. Sometimes I learn things about myself. It’s fun!”

Broad in range and by turns noisy and delicate, Visions Of A Life follows 2015’s My Love Is Cool, which hit No.2 (narrowly missing out to Florence + The Machine’s How Big, How Blue, How Beautiful) and has sold 107,065 copies to date, according to the Official Charts Company. It’s safe to say expectations are high.

Dirty Hit founder Jamie Oborne (see box, right) echoes those sentiments, calling it “one of the great alternative records” and comparing it to classics by Pavement and the Pixies.

What does Rowsell make of all that? “Why not! That would be crazy,” she says. “These are pop songs, not the ones you find in a nightclub or wherever, so there is the possibility of it being like one of those commercial rock records.”

She adds that Wolf Alice didn’t set out with that intention when demoing in London, or recording with Beck and Nine Inch Nails collaborator and Paramore producer Justin Meldal-Johnsen in LA.

It’s up to Oborne and Taverner to help facilitate that, and both believe it will happen. Visions Of A Life, they say, represents a significant step for a band that started life in 2010 with Rowsell and Oddie gigging acoustically around North London.

They’ve made big strides since, but essentially this band is a quiet group of best friends pushed into the limelight by the strength of their songs and their work ethic.

“I want them to have a No.1. It’s about understanding their creative vision and trying to amplify it without colouring it,” says Oborne.

“We need to market the record well. I think the growth of streaming since the last one is a big opportunity. I’m excited about growing into that sphere because I feel like alternative is probably the next type of music that’s going to have a massive explosion on those platforms.”

Taverner says he “likes to let the music do the heavy lifting, especially when building through word of mouth via social media and streaming platforms”.

The manager explains that the team is armed with “the ammunition to do some serious damage globally” and believes the campaign will result in “a natural step up to a bigger place”.

That goal can be achieved, he adds, by “touring in the right venues, not missing any steps, sometimes holding back when you could be going bigger… Having some control”.

With strength, fragility and an articulate understanding of human nature prominent in pretty much everything they’ve ever recorded, Wolf Alice have always enjoyed a strong connection to their fans.

Oborne sees the homespun intimacy that still informs their songs - even when given extra teeth by Meldal-Johnsen’s production and mixing from Grammy winner Tom Elmhirst (David Bowie, Adele) - as vital.

“They had these demos for the album, they were fantastical, with so much emotion and humanity. Some Wolf Alice demos are my favourite recordings of theirs.

“This band are just real,” he continues. “If something doesn’t seem real to them, they don’t want to know. Their ideology is so ethically sound, and I think that’s why people connect with them so easily.

That’s why Ellie’s such a force on stage: because it’s real.”

He adds that Rowsell, a vocal Labour supporter during this year’s General Election, is “an inspiration and a great role model”.

For the singer, the new record is about transmitting the message that mankind’s vulnerability is universal. She’s content to leave what to take away from Visions Of A Life up to those who listen to it, but says, “It’s nice when people can feel that they’re not alone with their internal thoughts or anxieties that we all have as humans growing up.”

And what does the album mean for Wolf Alice themselves?

“You need to gather a real sense of yourself around a second album,” Rowsell answers. “It really cements you as a band. Sometimes, when people react to your first album you think, Well, you don’t even really know us yet.

No one can say what kind of band you are, or how good or bad you are. I don’t think it’s enough to go by.
“With the second album you get a feel for who the band are and what they’re capable of, which is in a way more exciting…”

Visions Of A Life suggests Wolf Alice know exactly who they are, and its relatable character means that others soon will, too.

Just how many, of course, remains to be seen. So, would they like that No.1 this time?

“Well, I don’t not want it to be No.1, but I’m not going to cry myself to sleep if it’s not, as long as it’s in the Top 10!” Rowsell says, a smirk swallowing the end of her sentence.

“No, I’m joking. Yeah why not? It would be an excuse to have a couple of lagers, right?”

They’d best get down the offie, then...