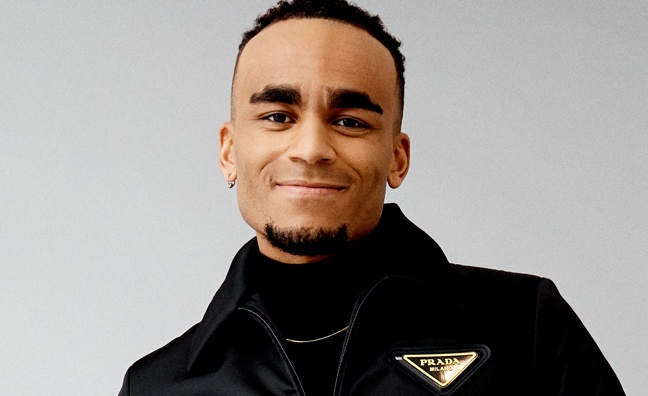 The Music Week Awards return this week, and our host for the biggest ever edition of the event is viral comedy star Munya Chawawa, known for a variety of characters including hoity-toity drill rapper Unknown P. In a special preview interview, the comedian reveals what the industry can expect from this year’s show and talks business, personalised tea bags and his bid to meet Pharrell Williams…

It was, in Munya Chawawa’s own words, “the best thing ever”. There he was on the London Underground, minding his own business (as you do), when the stranger sitting opposite glanced up from his phone and did a double-take.

“He was looking up at me, back to his phone, and then double-taking,” Chawawa tells Music Week, giddily recalling the encounter. “And then he turned his phone to show me that, at that moment, he was listening to Unknown P. There must have been a glitch in the matrix that day. It made me feel like Adele feels after winning 63 Grammys in one night. Forget the Grammys, I don't need it – someone was listening to my music on the way to Walthamstow Central.”

For the benefit of the uninitiated, Unknown P is the posh drill rapper alter-ego of British-Zimbabwean comic Chawawa, who released his debut single, Piers Morgan, in November 2020 via Atlantic.

“It's pretty amazing going on to Spotify and seeing that you have x amount of people listening to you per month, and that there's just one random guy in Singapore constantly playing your song,” says the 29-year-old, who made a name (or names) for himself on social media during the pandemic with his comedy sketches and roster of original personalities.

The self-styled “Kendrick Lamar of Norfolk” has won an army of fans on TikTok and Instagram (surpassing 1 million followers on each platform) thanks to his satirical humour and rapid reactive commentary. Chawawa showed his serious side through his BAFTA-nominated Race Around Britain YouTube series, which explored the issue of race, while he has also hosted The BRITs Red Carpet and the MOBO Awards.

And Chawawa’s rise is set to continue when he hosts the 2022 Music Week Awards at Battersea Evolution this Thursday, May 26. He is already relishing the prospect.

“I get thrown in the deep end in a lot of things,” reflects Chawawa. “My first stand-up gig was in front of 5,000 people at the O2 Academy Brixton, opening for Thundercat. So I've got to the stage where I've had enough experience at having to wing it that nothing really scares me now and I know that with the right preparation, I can be ready for anything. I have a feeling that I'm going to walk away buzzing from it – especially if there is white wine on the table.”

Speaking to Music Week over Zoom, he relives his experiences in the business and reveals exactly how he is getting in the mood for the biggest night in the industry’s calendar… 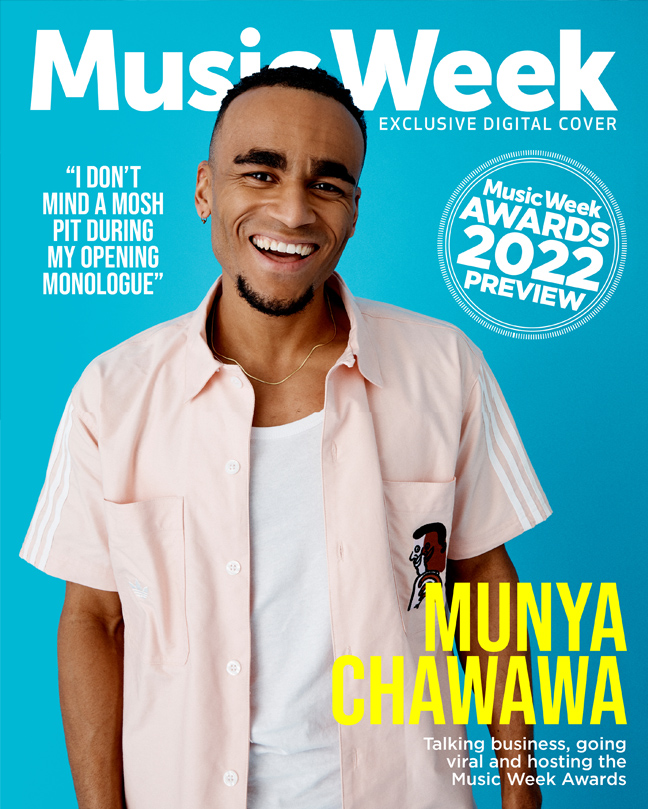 As the hours tick by towards the big day, how are you feeling about hosting the Music Week Awards?
“I feel really excited. As much as hopefully my sketches and satire helped people navigate the tricky periods of the pandemic, music was a big help for me. I went back to a lot of albums and stumbled onto a lot of new albums, projects, artists and playlists, which actually made the days fly by. If I look across my life, and even my career – whether it's in my sketches or having my own record deal – music has always been there.”

What should those in attendance expect from you on the night?
“People can expect a suit that by no means abides by the dress code. I do love a pink suit. They can expect some topical one-liners and probably some sort of reference to JLS at several points across the evening.”

How do you feel about getting up on stage in front of the whole music business?
“It's fine, to be honest. People who work in music are good vibes from my experience. I don't mind people doing the Candy Dance halfway through one of my jokes, or mosh pitting during my opening monologue. It's just what they do. Anytime I've done anything related to music, it's always been a good crowd. It's very difficult to feel bad when good music is playing, so as people who work and make it on a daily basis, I feel like they're going to be there for a good time.” 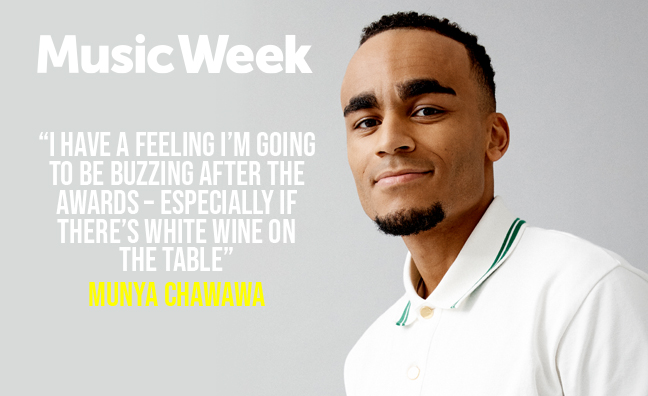 What have you made of the business more generally?
“When I was launching a couple of singles as Unknown P, I went to meetings and it would look like a studio audience because of how many people from different segments of the label were on the call. There are just so many cogs in the machine. Ultimately, the musicians put out the song and all the glory goes to them because they're the most front-facing aspect of that, but actually I can tell you first-hand that there are many cooks behind the successful broth of music. I know the expression is ‘too many cooks spoil the broth', but I think music is actually the exception.”

If you could have any job in the industry, what would it be?
“My biggest gripe about going to gigs is standing up. I actually like to listen to music sitting down, so I imagine if you're the person from a label getting invited to gigs, you get to sit down in a box, or a stall, or something. I'd be the primary music scout/stool sitter, so if there are any labels with a vacancy in that role, hit me up.”

What has excited you most over the past 12 months in music?
“I love a good come-up story. I love seeing a hero rise, and I think ArrDee's had a brilliant couple of years. That's a really great example of a team coming together and shining the right kind of spotlight on a great talent. What else have I enjoyed? I'm a real sucker for immersive experiences when it comes to mixtapes, EPs and albums. And I'm very proud to be the owner of a Headie One x M Huncho PS5 controller. I don't think many people have a custom-made Headie One x M Huncho controller, so I'm happy to take those kinds of bribes so that I can mention those people in future interviews. There is nothing to tell you right now that I'm not M Huncho, just so you know.” 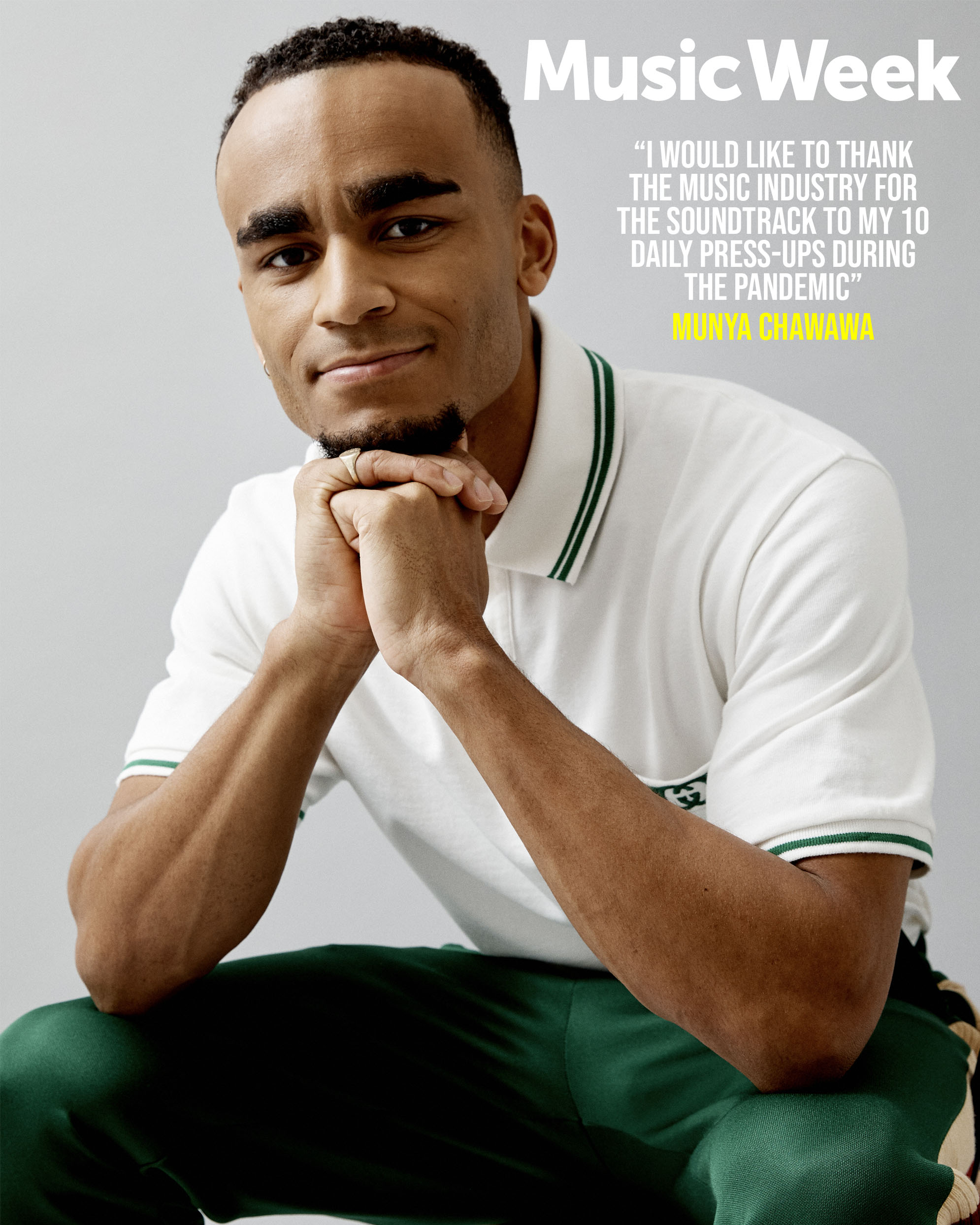 How has your life changed since your Unknown P character signed a label deal with Atlantic in 2020?
“I have roses arriving at my door every day. Having to push through a mountain of roses just to get onto the pavement has been a real struggle, but that is what comes with being a multi-platinum-selling artist. But what I’ve loved most about that experience was finding out how cool it is to make a music video. It seems to me that the sky's the limit when you want to create a musical vision and that was really cool to experience. We had brand new Unknown P tea bags and I believe the slogan for that was ‘experience what it's like to be teabagged by Unknown P,’ which I'm sure most people have on their bucket list.”

And what can aspiring rappers learn from Unknown P?
“That when you put out stuff that you like doing, someone will like it. Someone, somewhere, goes, ‘Hey, I really enjoy middle-class rap by a guy speaking 10 octaves higher than his normal voice.’ If you've got a crazy idea, just run with it and someone will enjoy it. And you might end up with a record deal and a line of Rich P biscuits.”

Speaking as someone who has built a large and engaged audience on social media, how do you think TikTok helps musicians?
“Well, it allows us to see the personality behind some of our favourite musicians because it's an app that thrives on fun. I think you've seen a more playful side: whether it's Headie One mastering his breaststroke, ArrDee setting up a fake romance to plug a single, or Snoop Dogg Milly Rocking to a Louis Theroux rap, it just adds a whole new dimension to artists. Once upon a time, you would buy their CD and, if you were lucky, go and see them at a gig, but that's the most you'd know about them. It makes the people we listen to every day feel that bit closer, so I think that's great.”

What has been the secret of your success on the platform?
“Unknown P, as an entity, is a real amalgamation of contrasts. He's posh, but he's a drill rapper. He kind of understands the lingo, yet he's blissfully oblivious of everything, and I think that mixture of something quite quirky and quite different drew people to it. TikTok allows people to break the mould in terms of what we think we have to do for people to enjoy our work. Being quirky and letting your imagination run wild gets rewarded on that app.”

Your content often comes with a serious message too. Is it important to you to make work that has a meaningful impact?
“My work, I hope, is a reflection of how people are feeling. I want to capture that and bottle that essence for them so that they feel like someone gets it. The most important thing for me is not trying to persuade anyone towards anything, it's actually removing the sting from something that we unanimously feel is pretty crap. If my comedy is able to do that, then I think that's massively important.” 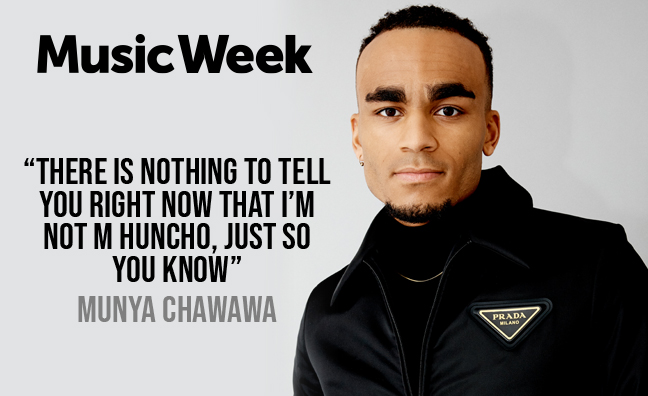 Where do you see yourself going in the next few years? What are your main ambitions?
“I love making my 60-second sketches and I'm sure that's something I'll never stop. But I'm ready to push my boundaries now as a creator. My first series last year for YouTube, Race Around Britain, was BAFTA-nominated, which was great and it's like, ‘Cool, well, what else can I do?’ I want to do some acting; I want to do maybe some investigative stuff; I want to do a series; whatever a person can make, I want to do that. And music-wise, I really want to meet Pharrell and for him to want to meet me. Everyone wants to meet Pharrell, but I want to give Pharrell a reason to want to meet me. And when I meet up with him, we're going to have a long conversation and a bubble tea.”

Finally, what’s your message to the music industry as it prepares to come together at the Music Week Awards?
“I would like to say thank you for being the soundtrack to my 10 press-ups every morning during the pandemic, for making my abysmal cooking a little bit more tolerable, and for stopping my housemates from injuring each other in some sort of frustrated wrestling match due to being in each other's pockets for two years straight.”