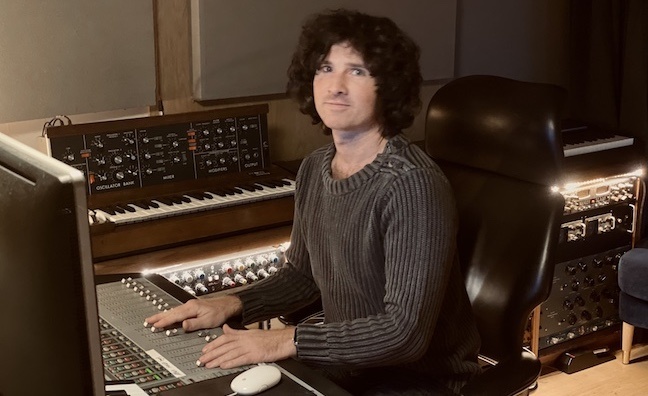 “I would become familiar with songwriters and producers by looking at the credits on the CDs, and a name I saw a lot of the time was Eliot Kennedy,” Carline tells Music Week. “When I first got the internet, I was chatting with this artist and she happened to know Eliot, so she put me in touch with him. We started talking about keyboards and synthesisers and got on really well, so I ended up going up to Sheffield to meet him.

“He’s been best friends with Gary since the early ’90s and was actually in the process of setting up a studio and production company with Gary, called True North, and they were looking for an assistant to start there as a runner – making teas, answering the phone and all that sort of stuff. He gave me the chance to go down to the studio and meet Gary, and I got a job there doing exactly that. It was a dream come true for me watching them write songs and just being in that environment.”

In time, Carline took on more responsibilities, programming and playing keyboards on songs the pair were developing for acts such as Donny Osmond, Blue, Atomic Kitten and Delta Goodrem. “I had to learn on the job how to be a good assistant and a good engineer, working alongside the best producers and engineers they would hire,” he remembers.

After Take That reunited in 2005, Carline became increasingly involved in the recording process and relocated from Chester to London in 2008. His role as co-producer with Barlow on Music Played By Humans marks the latest chapter in a heartwarming story.

“I wanted to produce it with Ryan,” explains Barlow. “He’s worked with me for years on everything from recording the band to mixing the DVDs, but the one thing he’s never done for us so far is produce. But when I had this idea, I thought, 'This record needs care, dealing with huge amounts of audio and expensive sessions, it needs someone who’s got that brain' – and Ryan’s been the perfect partner for it.”

Carline confirms the mutual appreciation. “Gary is brilliant, he’s just so hard working,” he grins. “He is the first in the studio every day and gets most of his writing done before we even get there. He’s just so happy when he’s writing and making music.”