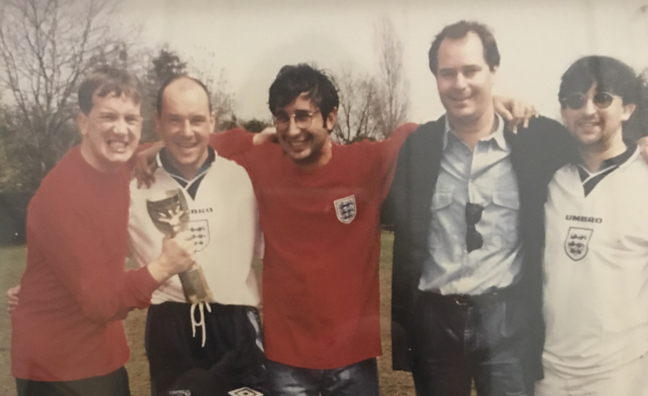 With England’s match against Italy in the final of Euro 2020 around the corner, Three Lions is heading back into the upper reaches of the singles chart. Once again, Frank Skinner, David Baddiel and the Lightning Seeds’ 1996 hit has been the soundtrack to the team’s process through a major tournament. As the nation waits for kick off on Sunday night, we revisit our Hitmakers interview with exec producer Rick Blaskey to trace the song’s story…

I said to the Football Association, ‘We need a national anthem of football’. Big words, but I give Frank, David and Ian the credit. We did it.

I remember phoning [Lightning Seeds frontman] Ian Broudie because his song Life Of Riley was used for Goal Of The Month on Match Of The Day and he had the sound, a very evocative sound. He said he’d love to do it but didn’t want to front it. I said, ‘Great, can I introduce you to Frank Skinner and David Baddiel?’

He sent a tape to Frank and David and they came up with the Three Lions and football comes home [lines], it’s genius to me. Ian sent two choruses – amazing. Do we know another song with two choruses? I don’t.

The FA had wanted Simply Red because Mick Hucknall was a huge football fan and they were one of the biggest bands. He didn’t have time because he was finishing an album, so management sent me the tracklisting.

One track was called We’re In This Together, and the FA they said they’d take it. It was a complete and utter dirge, but they and the BBC agreed that would be the official theme song. We premiered it at the draw ceremony in Birmingham. I was in the FA for lunch days later and they were taking a steady stream of calls saying, ‘We’re not using your dirge of a theme song.’ They looked at me, like, ‘Fix this!’.

I put Frank, David and Ian together in February and they recorded on April 1, Grand National day and April Fool’s Day. I was like the chief of police in the studio, they wanted to make it really real, about how football fans really suffer. There was one line, “Butcher bloodied by war”, about [former England captain] Terry Butcher with the blood-soaked bandage.

The song’s saving grace was the football comes home and three lions message. It was because of those two ideas that we got through the negative lyrics and the other things.

We went to shoot a video at an England training session...

I did a deal with [then Epic boss] Rob Stringer because Epic had The Lightning Seeds. I’d gone to Ian before everyone else. Rob was a genius on finishing the record, his A&R got it finished. We went through lots of mixes. A lot of people deserve credit. We recorded it at Dave Stewart’s place in Crouch End.

Frank, David and Ian got on like a house on fire. The three of them were just brilliant. The chemistry was right. They weren’t tunesmiths, Ian was, they were there to write the lyrics and put their Fantasy Football brand all over it, which is what they did.

We went to shoot a video at an England training session. No one was interested. I got Frank and David and Ian into the [players’] lunch and someone got a boom box out and played the song to a not particularly excited reaction.

The only players we could get after training were Teddy Sheringham, Steve Stone and Robbie Fowler. Frank and David got them to re-enact great moments from the past, and that was the video. We had 45 minutes. Nothing was set up to make this work. It really wasn’t easy.

The song is brilliant. What is it about a song that really connects? Every little piece, from the tune, to the lyrics, the arrangement, the production – any one of those can let you down. With this, every single piece fitted and supported the other.

Then there was the completely unknown surprise of public euphoria…