How Fall Out Boy reinvented themselves — and their audience 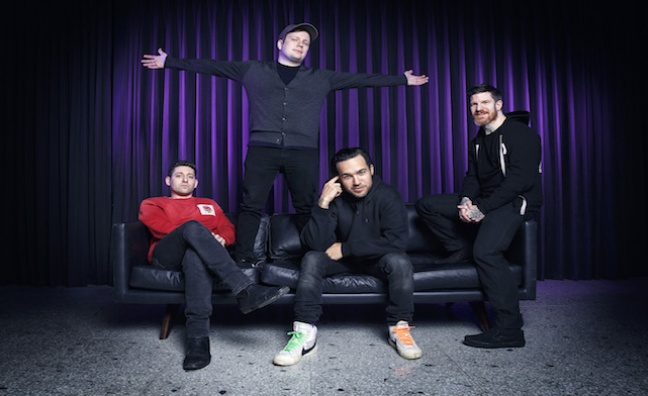 From emo underdogs to comeback champions and streaming kings, Fall Out Boy have come a long way. As the band unleash their latest album, Mania, Music Week joins singer/guitarist Patrick Stump, bassist Pete Wentz and manager Bob McLynn of Crush Music to find out how they reinvented themselves – and their audience…

Last year, Fall Out Boy singer/guitarist Patrick Stump answered the phone to his bandmate Pete Wentz. You may think there is nothing particularly out of the ordinary about that, but you would be wrong.

Yes, the pair text each other all the time, but calls? They are rare. Stump knew it must have been important so he answered – which, sitting beside his bandmate today in London’s Nobu hotel, he jokes is also rare.

“So…” began Wentz. “Do you think the record is being rushed?”

A wave of relief washed over Stump, privately he had been thinking that for a while. And so, having already promised fans that their seventh album Mania – stylised M A N I A - would arrive in September 2017, Fall Out Boy elected to push it back.

On August 3, Stump - with admirable honesty and a refreshing lack of PR spin – tweeted fans on August 3: “I’m never going to put a record out I genuinely don’t believe is at least as strong or valid as the one that came before it and in order to do that we need a little bit more time to properly and carefully record solid performances.”

This is a long way away from where the Mania campaign was conceived the previous year backstage at Reading Festival in 2016.

It was then that the band – completed by guitarist Joe Trohman and drummer Andy Hurley – played their manager Bob McLynn, co-founder of Crush Music, a new demo. The song was called Young And Menace, a track that builds into a full-blown EDM firestorm that also finds time to appropriate lyrics from Britney Spears’ unimpeachable pop classic Oops!... I Did It Again. It blew McLynn away. Together they all hatched a plan.

“We decided to put that song out first just to fuck with people’s heads then follow up from there,” quips McLynn.

The only problem was that the release of Young And Menace in April 2017 caused a buzz of anticipation, lighting a short fuse attached to... Well, not a finished album. The pressure to deliver was intense. Stump articulates the difference between the album we are getting, compared to the one we might have.

“You can’t really pry flower petals open, you know what I mean?” explains Stump. “You just have to wait. We were definitely taking some pliers and kind of opening them up. That’s not to say that there’s a different version of this album out there somewhere, it really is this album. We weren’t really giving the songs proper attention, we were really rushing them.”

All these months on, McLynn knows it was the right call.

“It’s never easy to make a decision like that, but it was the right one,” he tells Music Week. “This album is so fucking good. It needed the extra time.”

The decision has paid dividends. Mania – released last Friday via Virgin EMI - is a brilliant return, a song such as Wilson (Expensive Mistakes) showcasing their trademark lyrical wit in full bloom. But in many other ways, in 2018, Fall Out Boy are all but unrecognisable from their time as avatars of the early Noughties emo scene. They started off modestly on the back of their 2003 debut Take This To Your Grave (112,693 sales – OCC) before enjoying a major breakthrough. Their 2005 second album From Under The Cork Tree (459,653) spawned megahits like Sugar, We’re Goin Down and Dance, Dance, while 2007’s Infinity On High (496,721) went on to surpass that. In 2009, Fall Out Boy went on hiatus; in 2013 they returned only to become even bigger. They not only reinvented themselves in a nostalgia-free way with a highly-evolved take on rock injected with hip-hop, R&B, pop and EDM, they also reinvented their audience.

“You can’t say, ‘Hey, we’re a band that’s about the future, and we don’t really do anniversary tours and stuff’ and then put out music that’s, like, ‘Yeah, its OK!’" says Wentz of the logic behind delaying Mania. “It feels like talking out of both sides of your mouth. There’s literally no reason for us to put out new music in 2018 unless we at least think it’s great.”

“It just had to be different,” Stump adds. “Not aggressively different, but it had to warrant its own existence.

“There was a big lesson for me when we did Sugar... and Dance, Dance [in 2005], and they were back-to-back singles,” he continues. “At the time, Dance, Dance was a very weird song for us to put out. I remember playing it for the label and our friends and they were like, ‘Well, good luck with that man!’ [Laughs]. We did Sugar... and we got so lucky that that was the success.

Had the next single been Sugar... Part Two, then we probably wouldn’t be here right now. The fact that we had a song that was very different kind of set the tone for the band.”

Of course, they are not alone in flirting with the mainstream. If rock music had a dominant trend in 2017 it was in leaning into the pop realm: Linkin Park worked with Julia Michaels and Justin Tranter, Foo Fighters united with Adele producer Greg Kurstin and Queens Of The Stone Age enlisted Mark Ronson’s services. Today, Stump insists, “We didn’t know that being somewhat eclectic would help us.” This may be an understatement if ever there was one.

Fall Out Boy have all but bucked the trend of your typcial rock comeback, usually something held aloft by nostalgia. The proof is in the pudding. Or rather streaming. Where so many other rock bands have struggled to gain traction, Fall Out Boy are – at the time of writing – 188th on Spotify’s world ranking, drawing 10,194,383 monthly listeners. What’s more, their new material is seemingly more popular - compare 2015’s Centuries (328,506,487) to Sugar, We’re Goin Down’s (170,079, 731). But singles don’t tell the whole story. Fall Out Boy’s final pre-hiatus album, 2008’s Folie À Deux, has sold 144,581 copies according to Official Charts Company data.

McLynn, for one, praises Fall Out Boy’s ability to recruit new fans between albums without alienating old ones.

“Patrick is one of the best rock singers I’ve ever heard, and Pete has a great eye as to what is happening in music and the world in general,” he tells Music Week. “They don’t try to do what others are doing, but recognise it and figure out how to stay ahead. It’s difficult to do while maintaining integrity, but it’s been the same four guys for this many years. Even when they take that left turn it’s still going to sound like Fall Out Boy.”

If Fall Out Boy are seemingly mastering the art of triangulating themselves sonically between rock, pop and hip-hop, it’s because they – unlike a lot of rock bands – consciously decided they want to remain “competitive” in the modern charts.

“Look, I know we get written about like, ‘Where’s the rock!?’ all that stuff,” says Wentz. “Well, we live in a hip-hop world and we have to find a way to function within that world. I think Fall Out Boy does. There are plenty of bands that go, ‘Alright, well, that is walled off to us, so we just exist and our audience is what it is’. People [say to us], ‘Oh, you’re the band that I hear on the radio’ - it’s us and maybe a handful of other bands, literally a handful. In order for us to do that we have to sonically make sense.

“That doesn’t mean we make hip-hop songs, we’re not jumping the shark!” he continues. “If we did that then we’d just have Swedish guys write for us. What the record has to do is be competitive, I don’t mean like a game of basketball, but in the landscape of pop art it needs to be competitive sonically.”

Yet, there is another case to be made that Fall Out Boy have not only negotiated the divide between rock and pop, but also two distinct eras of the music industry. Wentz – runner of DCD2 records ? confesses to being geeky about the industry side of things, he loves the stories emerging in the streaming era, such as puzzling over why FOB’s song Champion is really taking off in India.

“The chasm between the new industry and the old has never been wider than it is now,” he says. “The big songs of last year are just insane, my parents probably haven’t heard any! At my kid’s school there are kids wearing Gucci Gang shirts! We came at the tail end of the old era, but we lean into the new business and the new wave. We’re an in-between generation.”

As suggested by their reluctance to simply bosh out Mania and give it to people in any old state, they still believe in the album format – Wentz is adamant that FOB fans still want physical products. Perhaps that’s why they’ve put so much of their personalities into the Mania’s campaign launch - something that is hailed by Virgin EMI marketing manager Helen Kennedy.

“The band have been instrumental in making fun creative assets for us to use to market the record in the UK, from non-official videos in skateparks to mock revealing Brendon Urie from Panic! At The Disco as one of the llamas in the Young And Menace video,” says Kennedy.

She is not alone in praising the band.

“If you look at what they’ve done, how long they’ve been doing it, and how they are still continually putting out relevant music today - I’d say they are one of the most important rock bands in the modern era,” adds McLynn.

You have to wonder, though, how much of that is down to Fall Out Boy’s refusal to stay in one place. What, for instance, would have happened if they came back in 2013 sounding like they used to?

Stump picks up the train of thought.

“I wrote half of Take This To Your Grave in my bedroom in my mom’s house,” he begins. “So to go back and impersonate that as a grown man in your house in LA when you’ve got a mortgage, life insurance or whatever would’ve been so silly. I really resist any kind of strictly nostalgic stuff. People ask us all the time, ‘Wouldn’t it be great if you were to play some of the old songs?’ Well, that just means you haven’t seen us in a while. Every night we play a lot of old songs, new songs and covers. We cover a lot of stuff.”

At this point, Wentz interrupts Stump, cupping his fingers around his mouth as he whispers to his bandmate.

Stump bursts out laughing . You sense things will forever be like this in the world of Fall Out Boy: they’ll always have the last laugh.

You can watch the video for Fall Out Boy's latest single Wilson (Expensive Mistakes) below: