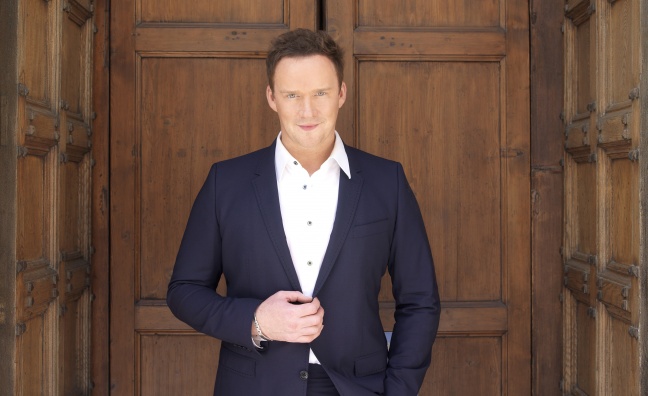 I love gadgets,” Russell Watson grins, as he fiddles with his iPod, “I’m a right knobhead.”

His TV is, he laughs, “the biggest telly in the world”. The air is thick with potpourri but it’s cut with the 49-year-old tenor’s palpable excitement.

He shows me a message on his phone which displays his single Sometimes Love Just Ain’t Enough’s latest Adult Contemporary airplay chart position in the US. At the time, he was No.25, ahead of Coldplay and Lady Gaga and hot on Rihanna’s diamanté heels.

Ironically, Watson claims he left Sony Music in 2013 because they failed to really push him in the States.

He says it was also an issue with his original home, Decca, despite him being the UK’s best-selling classical crossover artist of all time, with 14 Top 20 and six Top 10 albums, and selling more than seven million albums since 2001.

“When I signed my first deal in 1999, there was a very clear balance between accountants, managers, lawyers and creative people in the labels,” Watson says. “Now, a lot of the time, [executives] take on the whole shebang.”

Fortunately, all that looks set to change with his new label, Canada/Italy-based indie FOD (Field Of Dreams), which he signed with earlier this year, joining an eclectic roster that also features Tony Mortimer and Aggro Santos.

“When I met Bob Rose and Dean [Manjuris] for the first time, I immediately thought, OK, these guys believe and they want to work with me,” Watson says.

“They weren’t playing record label games. It was really refreshing to not have to cut through heaps of bullshit.”
Born in Salford, inspired by his beloved grandmother’s love of music, Watson started piano lessons aged seven (“All my friends would say, What you playing piano for, you pansy?”).

Then, in his teens, he discovered guitars.

“I had no aspirations for fame though,” he says, “I was never hungry for anything like that as a kid, but I always had a feeling there was something special round the corner. I think that’s why I underachieved.”
He recalls the time he and his grandmother drove past a row of huge houses in nearby Atherton in their Morris Minor.

“They were all set back, the lights glistening, the untouchables. I turned to my gran and said, One day, Gran, I’ll live in one of those big houses.

She clapped me across the head and said, Get your head out the bloody clouds Russell.” (She lived to see the first five or six years of his career).

When he left school, Watson supplemented his factory work performing in northern working men’s clubs, belting out the classics (slipping in some classical repertoire here and there for kicks) he’d learned from tape recorders as a kid.

He was a natural mimic and used to “do all the voices”. He does them now, still. Every anecdote is embellished with a to-the-tee impression, so much so that, when FOD MD Bob Rose calls me a few days later, I immediately know it’s him.

When Watson signed with Decca he didn’t have a manager, but his growing local success had meant he got the opportunity to perform at Old Trafford.

“It was the year the club won the first-ever domestic treble and guess who was on the pitch singing Nessun Dorma?” he laughs.

“I got a call saying Sir Alex [Ferguson] had asked me to represent the club at the Champions League final. I was, like, I’ll just check my diary, I might be at Wigan Road Working Men’s Club that night…”

All of which meant that, when he walked into the meeting at Decca, the label already knew he had mass-market appeal. But, he admits, it was probably his spiel that really won them over.

“I said to them, If you want Hamilton Smeaton-Smythe who’s trained at the Royal College of Music for 15 years and can read dots and the whole shebang, then I might as well walk out now.

But if you want someone who’s been singing classical music on the back streets of the North West in working men’s clubs to audiences of 150 and they’re going mental, then I believe that we can take that to a much larger audience who have not been introduced to classical music.”

From the get-go, Watson had a hunch he could sell an album featuring songs by both Ultravox and Verdi.
“I said, You’re going to think that singing Nessun Dorma and Vienna on the same record is a bit weird but I have done it for 10 years and it works.”

Pilavachi asked if he’d brought a CD or any press stuff. Watson said, “No, but I’ve got my voice with me. Then I got up on the table and sang O Sole Mio.”

He went on to deliver on his promise, selling millions of records and performing in front of presidents, prime ministers, royalty and even the Pope, who requested a private audience with him at the Vatican.

The new album has a trademark mix of classical and pop repertoire, with some original numbers written by Watson, and features a curious line-up of musicians from Blondie, Portishead and Oasis/Noel Gallagher’s High Flying Birds.

It was recorded live in Ennio Morricone’s Forum Music Village Studios in Rome with the 75-piece Orchestra Italiana Del Cinema (the orchestra Morricone uses for all of his movie scores).

The US is now in Watson’s sights in a big way. He’s got a New York launch in a couple of weeks and an LA one after that.

Rose tells me (although Watson does the accent better) that, “People simply love his voice. He has one of the best on the planet.” The Stateside plans are similarly grand.

“The Grammy and TV people all want to see him and we have a couple of big night-time shows interested.

When they see what a great talker he is, they’re going to fall in love with him.”

The (self-penned) song we’re listening to right now, I’m Alive, was written about his much-documented brain tumour, that saw him undergo extensive treatment in 2007.

He says he’s bored with talking about it now, but that it certainly altered his worldview.

There are hints at his classical “roots” on the disc. Tosti’s Aprile and Bizet’s La Fleur Que Tu M’Avais Jetée bring his trademark soar to prominence. Sitting here with him in his trainers and sports gear, telling me about how much he loves his X-Box and his gran, it was briefly easy to forget that this dude can really belt it out.

These are different times, however, from when classical crossover was flying off the supermarket shelves. His 2000 debut, The Voice, has sold

“We sell turkeys at Christmas,” he says, candidly, “People buy my product as a gift. I have my core fanbase who all go and buy my record and it wouldn’t matter if I was singing the alphabet.

But I think my buyer is the hairy-arsed builder who’s just come off the worksite and it’s pissing down and he goes into Tesco to get a microwave dinner.

He goes past the CD section and he thinks, I’ll get that for me mum or me gran for Christmas. It’s the
gift-buying market.”

The general consensus among Watson’s critics at his peak was that he was merely a voice with little training.

He laughs: “Yeah, I got a record deal and then learned how to sing. I basically put the cart before the horse. Technically, physically, in terms of the knowledge of the music, I had no idea what I was doing. I’d been singing in clubs and then, all of a sudden, there I was with the big guys.”

He agrees the criticism was justified in some ways but then, on the other hand, “My first record did 1.5 million, so…”

He’s also spent the last 15 years honing his craft. “I’ve read so much, I’ve learned so much,” he says, breaking into a couple of top-volume scales to demonstrate how not to strain the vocal chords.

“If I’d have tried to sing La Fleur five years ago, it would not have happened. But the feeling I get from singing something as technically demanding as that is immense. If anyone were to criticise me now, it would be a taste thing, not technical.”

Though obviously happy with his lot, it’s clear Watson is still sore about the way he feels he was treated by the big labels.

“I was left in the international wilderness,” he says, sadly. “There were no conversations. I didn’t know where I was or what I was doing.”

These days he keeps a tight-knit team. His daughter Becky is his PA and his sister Hayley is his business manager. Steve Dinwoodie, his radio plugger, has been with him since the early days.

“The best piece of advice I can give to any new artist is to find a group of people you can trust implicitly,” he says.

“Nobody gives a shit any more so, when you meet someone who cares and believes and feels what they’re doing, I love that. I feel emphatically attached to everything I do.”